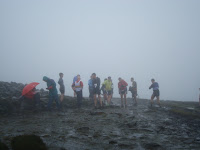 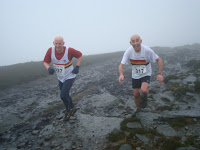 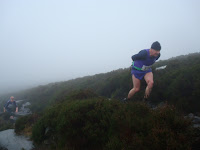 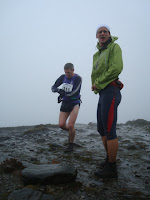 It was a day for celebration; another year, another gift of time and another incident of sheer incredulity as I raised the boot of the car to reveal no fell shoes whatsoever.....; In my eagerness to wish in the new year I had emptied the boot of all things terrestrial and was left to run 3 miles and 1000ft , all uphill, in my smooth best Sunday road Nike Pegasus's...As I lined up it was like sending out the brownies at the Somme... Hence when things began to get a bit tasty up past Garleigh Moor and just beyond Lordenshaw car park , traction, adhesion (and anything else ending in shon) all went east and I lost any semblance of forward movement in an effort to remain upright. Only the lentil and ham soup and rolls at the Newcastle Hotel after the event saved the day. Went from 6th to 8th when we hit the mud and it finished that way in around 26 minutes. Gary Jones of NFR led all the way until the final 40 metres when a rejuvenated Martin Frost (V40:North Shields Poly) took flight and stole the show. Gary's time was 24:59. Nick Golightly was 3rd (NSPoly) and the fight for 4th was won via a workmanlike effort from Tim McCall (Norham) who beat Andy McQuade and Rob Hall of Blyth. Veronique Oldham (Norham) pipped Les Turnbull (pictured above & also Norham) for 9th. She also broke the womens record by over 1 minute from previous holder Beverley Whitfield. NFR won the mens team prize and Alnwick women, the women's team prize!