I read 'Head in the Clouds' a while ago and enjoyed it. Lately, Ive been reading Charlie Spedding's book 'from Last to First'. A good read. One chapter entitled 'The beer drinkers guide to sports psychology' grabbed my attention immediately. In it he dwells on running mentality and how he came to the conclusion that he needed to change his vocabulary and mindset to convince his body to do the business. Postive thinking. That's me, then, tomorrow. Pacing will be tricky for the first half as I want to run the distance evenly. Although I said there were no targets earlier for the marathon in 3 weeks, I couldn't help noticing that the London Marathon 'good for age' requirements for my age group is 3:15 or faster (strokes chin and thinks 'mmmmm'!)
Resting before the event is always a test when you'd rather be out on the road taking lungfuls of the British air. The forecast is cool with a north east wind. The eruption from the Eesajackofalltradesjaffacakeiskull volcano still continues and I'll be trying to match its exploits emitting small but regular amounts of ash and steam. With insufficent speed for a vapour trail my expected plume may be moving in a southerly easterly direction. Unlikely to show up on the satellite images. Don't wait up.....
Posted by AMcD at 07:42 No comments:

Appealing to the Swing Voters

I'm taking a more mature approach to racing this year. At least that's what I'm telling myself. I've stopped watching Dr Who, cash in the attic and those 1 hour political 'debates'. My manifesto for May is completely different. A 20 mile race next weekend followed by the Edinburgh marathon 3 weeks later.
The North Berwick race is 20 miles in length and covers perhaps half of the Edinburgh Marathon course and I have now managed to find some focus for this debut marathon appearance late in May.
I'll run North Berwick next week. Fast and steady but not pan myself. In doing so I think I might have a chance of appealing to the swing voters who'll no doubt line the streets in support. As I used to go to school there, I'll also be trying to avoid my old teacher whose still waiting for my homework.
I've begun to feel more 'zippy' after my long holiday and today, feeling fully 'on message,' ran an easy 18m. The craic was good and we came across a triathlon half way through which was entertaining.
I think next weekends exploits will be new territory having only run 20 miles in training once before and I have been canvassing for advice. My last long race was the Pentland Skyline which was a 16 mile bruiser where the wheels, axles and doors fell off the battle bus after 2 hours. Truly, it was like driving one of those squared wheeled cars around the circus ring. All I missed out on was the red nose and clown costume (I did, however, have the big red eyes and my trainers felt ten sizes too big!) I suppose the 5500ft had something to do with that.
I think 20 miles three weeks before my 1st marathon will be an adequate test and give the pollsters something to talk about. I've resolved just to go out and enjoy both the North Berwick Race and the Edinburgh Marathon. My policy is not to get hung up on tapering, splits and all that stuff. Just have a good day out. Might even enjoy the thing.
In preparation, I'm sewing a few extra pockets into my running vest for juice and some money so that I can place a few bets as I pass Musselburgh Race Course. I don't need any room for election pamphlets and I've already blown my deposit on a new sweatshirt and a tub of Vaseline for all that future chaffing. I hope it'll be a good turnout. People have complimented me on my radio face already.
Posted by AMcD at 19:28 No comments:

Well, I've done it now. Rambling on last week about the poor start to the season I think I had a rush of blood to the head and while surfing for a 'longer' event to run late in April, I found myself entering the Edinburgh to North Berwick race on May day. At a distance of 20 miles it'll be a chunky test for me. In celebration of this temporary aberration, I managed a 14 mile steady session on Saturday and another 15 miles today (with the clan) through the daffodil strewn lanes.
Yesterday as I was padding along in the sun, I passed a runner going the other way. An older bloke, he was clad in trackie bottoms and a hoodie pulled tight around his face with only his eyes and nose poking out. A scarf or dust mask might have been more effective. Anyway, I'll have my work cut out for the next fortnight now. I'm already telling myself 'its just a training run'. Well, I'm all for new challenges.
Posted by AMcD at 20:50 No comments: 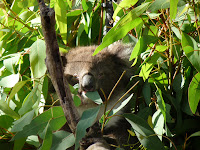 Just back. When I initially arrived at the holiday home in Rockingham near Perth late in March I announced that I fancied a run to Port Kennedy. No idea what it was like but it sounded nice and I thought it would be a 2 hour run (around 13 or 14 miles away). However, the temperature had other ideas and over the next 3 weeks it was a struggle to complete even an hour of jogging in the sun. Running in the evening was possible and Kwinana, with all its industry, was a favourite as the back road ran along the coast and was quiet.
During the day with the mercury reaching 25-30 degrees. the runner in me was rendered useless. 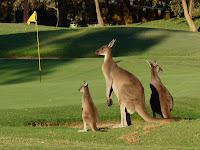 I woke up on Monday, our 2nd last day of the holiday and the rain had arrived. It was windy and cool (16 degrees). After a wander around Fremantle I chucked on the gear and took off for Port Kennedy late in the afternoon. Running all the way along the side of the very straight Reid Street, Australia's answer to a Roman Road, I reached the Port mainly thanks to an easy pace and Peter Gabriel's Greatest Hits. It continued to drizzle on the way back as the light faded but it was mission accomplished albeit that it was more of a jog than a full on training session.
Getting back yesterday after being in the air for 18 hours was nice and I managed a 30 minute circuit of the town before disintegrating into bed as a crumpled heap. Bonsor holiday.
Posted by AMcD at 08:16 No comments:

Rested on Wednesday and on Thursday went out in the evening for an hour and for the first time felt like running, stringing a useful 8.5 miles together. The feel good factor wasn't, however, maintained today as I plodded around the streets for a little over an hour heavy legged in the sultry heat of the afternoon.
The biscuit barrel has been taking a bit of a hammering recently and this weeks choice are those stalwarts of the biscuit world, ginger nuts. Good value, very underrated and well up in the dunking stakes.
I had planned to run a long race in May and, thankfully, it's not the deal breaker of the season. The achilles niggle has meant fewer miles than usual. I think I'll manage to run the thing but it could end up being more of a social. I'd better have a scan through the calendar for April to see if there's something I can have a go at. In the meantime, I may have to up the ante and invest in a jumbo pack of Jaffa Cakes, a biscuit for true connoisseurs. Fewer calories and less fat than a digestive, more interesting than a rich tea and filled with all that tangy orange...Yep, my five a day fruit contribution is well covered.
Posted by AMcD at 16:55 No comments:

Banked an 80 minute run on Friday evening on the beach then past the Kwinana Industrial Park looking a little like Redcar used to in the darkness. Ran back along the duelled Patterson Road where the pavement ran out and I had then to pick my way along the tarmac and gravel in the sultry heat between the rush of passing cars avoiding the imaginary pack of dingos, skulking snakes and funnel web spiders.
After a Crayfish barbie and a few bottles of Emu 3% beer on a breezy Saturday (only 25 degrees) went out on Sunday Morning for an hour along the beach then cut back by the grain terminal near Kwinana. The swish of the waves breaking was only interrupted by the loud drawl of a crow (sounding a bit like a baby) and the louder garbling of the occasional flock of cockatoos. Not seen a dolphin yet in the bay. 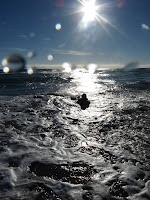 Drove up to Ocean Reef to spend a couple of days with friends north of Perth. Oddly enough, their house is 500m from the beach. It was a lazy afternoon on Sunday spent in the Ocean battling the crashing breakers and rip tide and then a barbie.
Monday saw me up at 7am and out for an hour 45 along the red asphalt path that cuts through the dunes and that the joggers and cyclists use for exercising. In places I was working harder than an Aussie air-con unit.
Its busiest early in the morning or at dusk when the temperature is low. It was a relief to ease my achilles into the pool by the house before eventually plunging in for 15 minutes.
It was cloudy and mild on Tuesday morning with a reluctant half an hour jog on the red path. Much quieter this morning with folk back at work.
Posted by AMcD at 18:42 No comments:

Its all abit stop-start at the mo. with 7 miles Sunday fairly flat out, an easy hour on Monday and a 2hr special on Tuesday. Wednesday was run free and Thursday was a gingerly 2 miles. The achilles is still playing up and it'll be a quiet weekend with no racing. I think its improving though. Will try an easy hour later tomorrow if I can shoe horn it in to my busy programme! The 2010 season hasn't really started for me so far, but that means I'll be fresher later when other athletes are fading like flies against the window or weary seagulls chasing the trawler. Or is this complete nonsense.....I think we all know the answer to that one.
Posted by AMcD at 21:38 No comments: