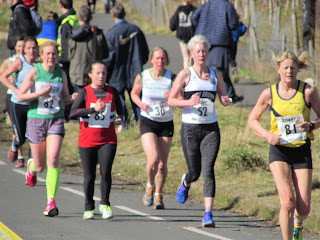 The arrangements for the Elswick Good Friday relays have changed in the last year or two from what I remember. In the olden days, you could roll up (as a club member) on the day and decide among yourselves what the teams were. The course was also a generous loop around the Newburn Industrial Park, the site of a former power station, a graphite works and a First World War factory which handled cordite and was known as Canary Island. The race is now all pre-entry, as the numbers have expanded and the course changed to a narrower dog-leg, out and back affair. Its still all off road though and no hills. The teams were pre-selected and I was advised I was second leg in the second team. The forecast was good and its only 2.2 miles in length, so how hard can that be?  Pretty tough as it turned out. Although our lot were all over 50, I was the slowest out of the 4 man team and felt compelled to make sure I didn’t let anyone down.More facially tortured gurning action at the finish guaranteed then for sure. 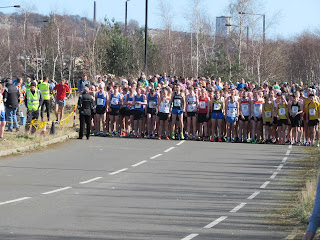 The women’s race went before the men’s and there was a good crowd present to see Birtley take the honours.

The men’s field was large and it was Rob H who ran first leg. I set off (as he crossed the line) and tried to settle into a pace; the first mile was 5:30 and a little quick, but predictably the pace slowed to something nearer 6min/mile on mile two as I passed a Tyne Bridge Runner and was then overhauled by another Tyne Bridger near the finish. Tim M and Paul W rang strongly to maintain our 8th place in the vets competition and that’s the way it finished. 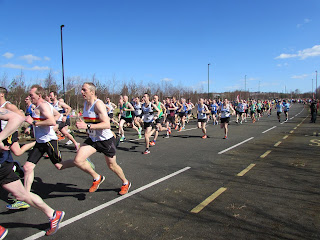 I took a trip out to Whitley Bay on Sunday and joined the throngs in the cool spring sunshine as they promenaded up and down the front with a stiff southerly blowing a hoolie. I jogged 4 miles up toward the start of the North Tyneside 10k route into the headwind and realised they would be coming through very shortly so had to high tail it back to the car to grab the camera and take some snaps. The huge tailwind helped many to a PB and some looked to be having trouble keeping up with their legs.


Seven miles in the morning and a jog through the woods for another 6 later in the day. This week will be an easy one with the Tay Ten coming up over next weekends horizon. Looking forward to doing a few different races this year. I think this is a good idea to stop things becoming stale. There was even talk of the Loch Ness Marathon over drinks last night. Seems a long way off. I suppose Inverness is, unless, that is, you live in Inverness.
Posted by AMcD at 09:30 No comments: 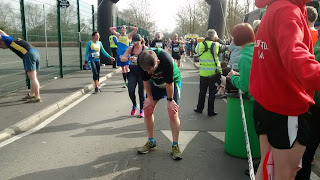 I don't usually do forward planning. Well, at least, I do, but I don't admit to it. Plans frequently involve change and planning requires commitment. Seems unnecessary effort.

I entered the Trafford 10k around 6 or 7 weeks ago when there were a few of the 1000 places left. Mrs Mac also got in. I resolved that if I was going to beat myself up on a 10k this year, I'd at least give myself a chance and run the highest profile and fastest 10k in town. Well, its not in my town, its in South Manchester, so it required a 6 hour round trip and an over-niter in a  hotel. I had been to the shopping outlet earlier in the week to get a pair of Adidas Boosts, as I wasn't convinced that the Hokas were the best shoe for this event. 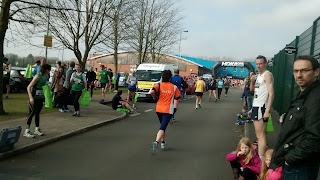 I woke this morning the birds were tweeting, the dawn was breaking and there wasn't a breath of wind. So far so good. After porridge at seven, we had a short drive to Partington and collected our numbers. No entries on the line today.

There was an air of expectation outside, but quite a different air in the toilets as I chatted to one guy from Birmingham, a student from Bristol Uni and another from some other far flung part of the UK. They came from all places. We were all there for one thing...the 10k that is...you know what I mean, a quick time. Outside as I tried to look like a contender, I noticed names on numbers like Lancashire, Davies and Williams. I said hello to Ian H from our club who like everyone, was going through their own warm up ritual. Some more affected than others and a little bizarre to watch if you're not a runner.

The course was on a closed loop through narrow, flat countryside lanes bordered by hedges and peppered with farm entrances. We were herded together as the thermometer hit double figures and we were off sharpish. It was perfect running weather. There was chip timing but it only took me 12 seconds to get over the line. I had done 40 minutes dead in a training run on Wednesday so I knew I could achieve a sub 40 minuter at least. I even predicted 39:39 last week on this blog, but the hordes in front of me after the start limited movement and I struggled to get through the first mile before things thinned out a little. 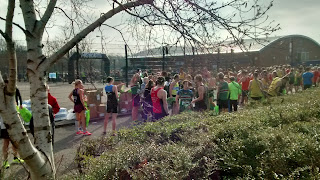 I caught a small group at 3 miles and passed the 5k mark in around 18:30. All I had to do was keep it together. A couple of the group dropped off and I sat in behind a women with cropped hair, black top and a metronomic, purposeful pace. My thinking was if I could stick with her, we would continue to do 6 minute miles and I could forget about everything else...just tuck in, relax and try not to look like I was having a cardiac. I spied a clubmate, Rob, up ahead and counted him around 15 seconds ahead, but I cleared my mind and just grafted. In out in out went the breathing; pound, pound, pounding out the steady rhythm. 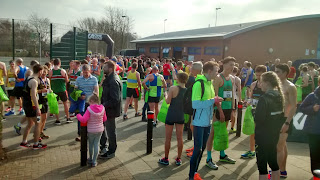 The last kilometre was on a poor surface, but having run along it during the warm up, I knew where the potholes were and tried to keep a good racing line and hey presto, the finish was there and going a little blue and well into the anaerobic zone, I hauled my exhausted body over the line for 37:24 (7th O50).

During the warm down I caught up with Rob H and son, both having great runs. I then had a low glucose moment with profuse sweating, but as I was still mildly delirious and elated with the time, it didn't bother me. As I ran back along the lane, I overheard the conversation of a couple of runners as they passed each other. It went something like this.......
'How did you do Alex?'
'Good run cheers; 29:54'
Thats great.....'
How did you do?'
'30:15'..
Where else would you hear those times in casual conversation. Today 1 runner beat 29 minutes and 27 runners beat 30 minutes, with a huge haul of PB's and SB's. As plans go, this was a good one. One of my better ones. Mrs Mac seemed happy with her time as well, so happy days. I quite like this planning lark.

I was collected by chauffeur on Saturday morning and driven to Druridge Bay, just south of Amble for the Park Run. I've only ran 6 of these since 2009, when I was bagging late 17 minute times for 5k. As the runners began to arrive, me and Mr B had a lop around the course. It was more track and gravel than tarmac with a small click over a wee bridge at the far end of the course. Its a 2 lapper that makes its way around the lake formed by the old opencast.  There was just over 100 that kicked off and I had the headphones on.

The rest of the family (bar one) were also running but had arrived via another kind driver, so quite a turnout. After the start, I tried to get into a stride and manage my breathing. A 5k is a bit of a flat out affair. There's no time to ponder the likely economic effects of Brexit, the pro's and cons of Hokas cushioned shoes or how my latest read, Waugh's 'Brideshead Revisited', is shaping up. The last Rebus novel was predictably enjoyable.

The leader was well away in front, but I had snuck my way up into 2nd and dug in for the second lap, starting at 5:48, dropping to 6:12 and then digging in for the final mile or so, slaver flaying from my loose chops. It wasn't pretty but 19:03 is what it was. On the warm down I was assured that the course is long, so I am predicting 39:39 for Sundays up and coming 10k. When the results came out I was down as 'unknown', so no loss of face here. I can remain discreetly faceless. The scanner must have misfired. I hate a mis-firing scanner, don't you? If nothing else I should be able to crack 19 minutes in July Sunderland 5k, which has 300 metres of downslope at the start and is worth 10 to 15 seconds of any runners time.
Posted by AMcD at 11:50 No comments: