Snow all around at Guisborough Woods 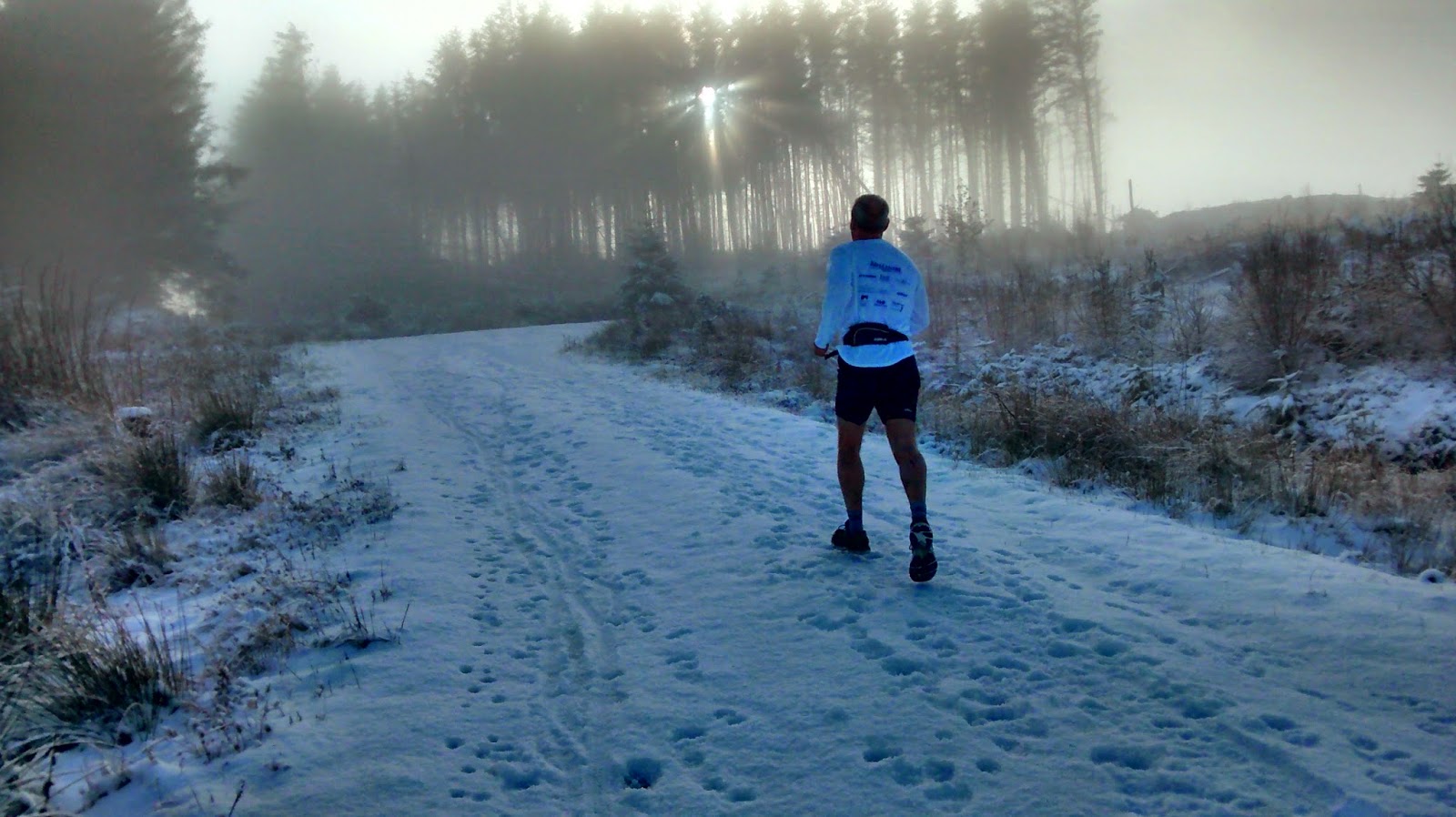 A brand new pair of green and orange Salomon Speedcross's were peering out at me from their box (...and not before time). Time for some hill action. I had chivvied up the youngsters to accompany me down to the Guisborough Woods Hill Race today and I was looking forward to plastering some mud onto new shoes. We arrived in good time, but by the time we walked back to the car from the registration at the rugby club, it was time to jog up the hill to the start. 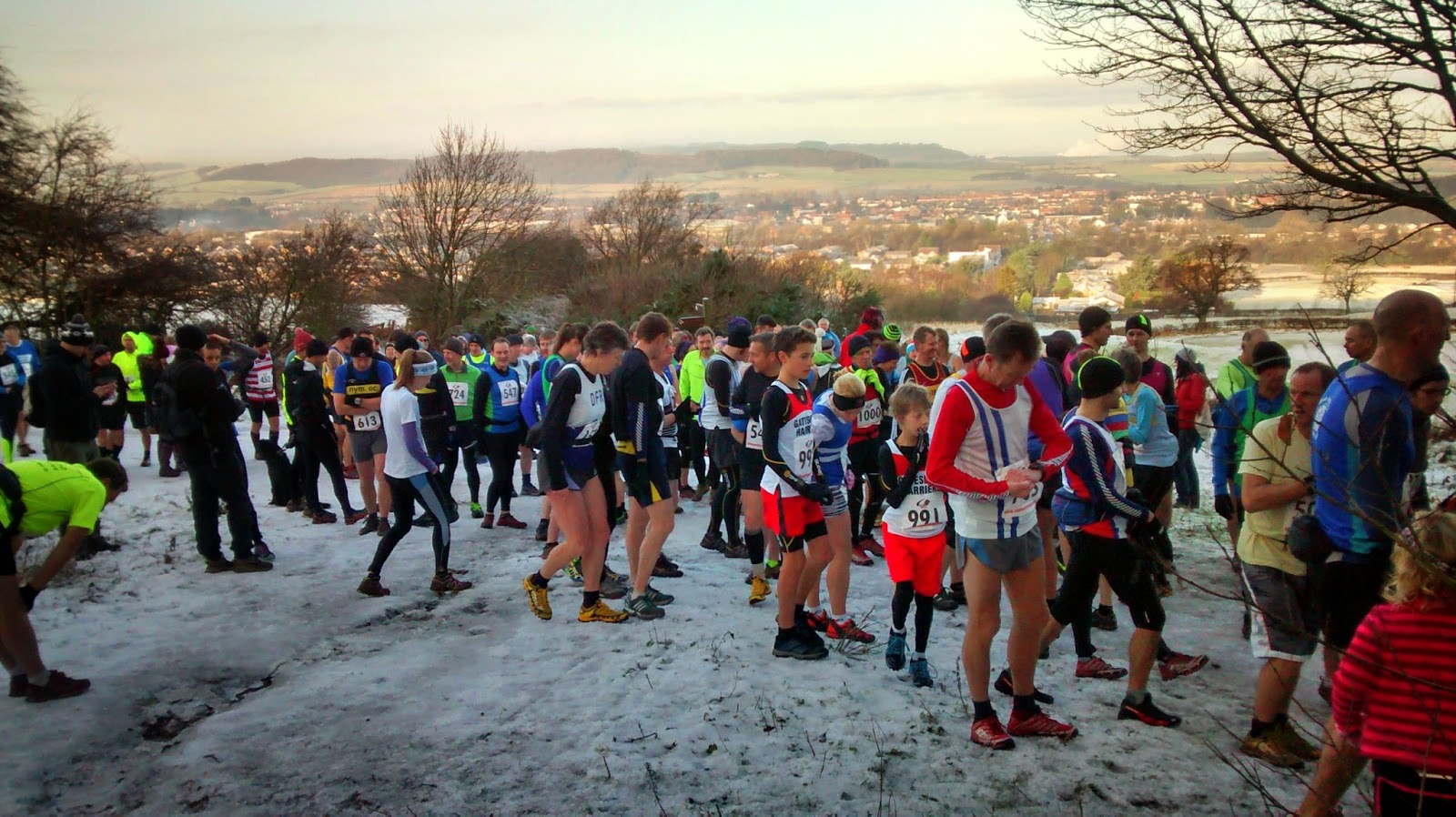 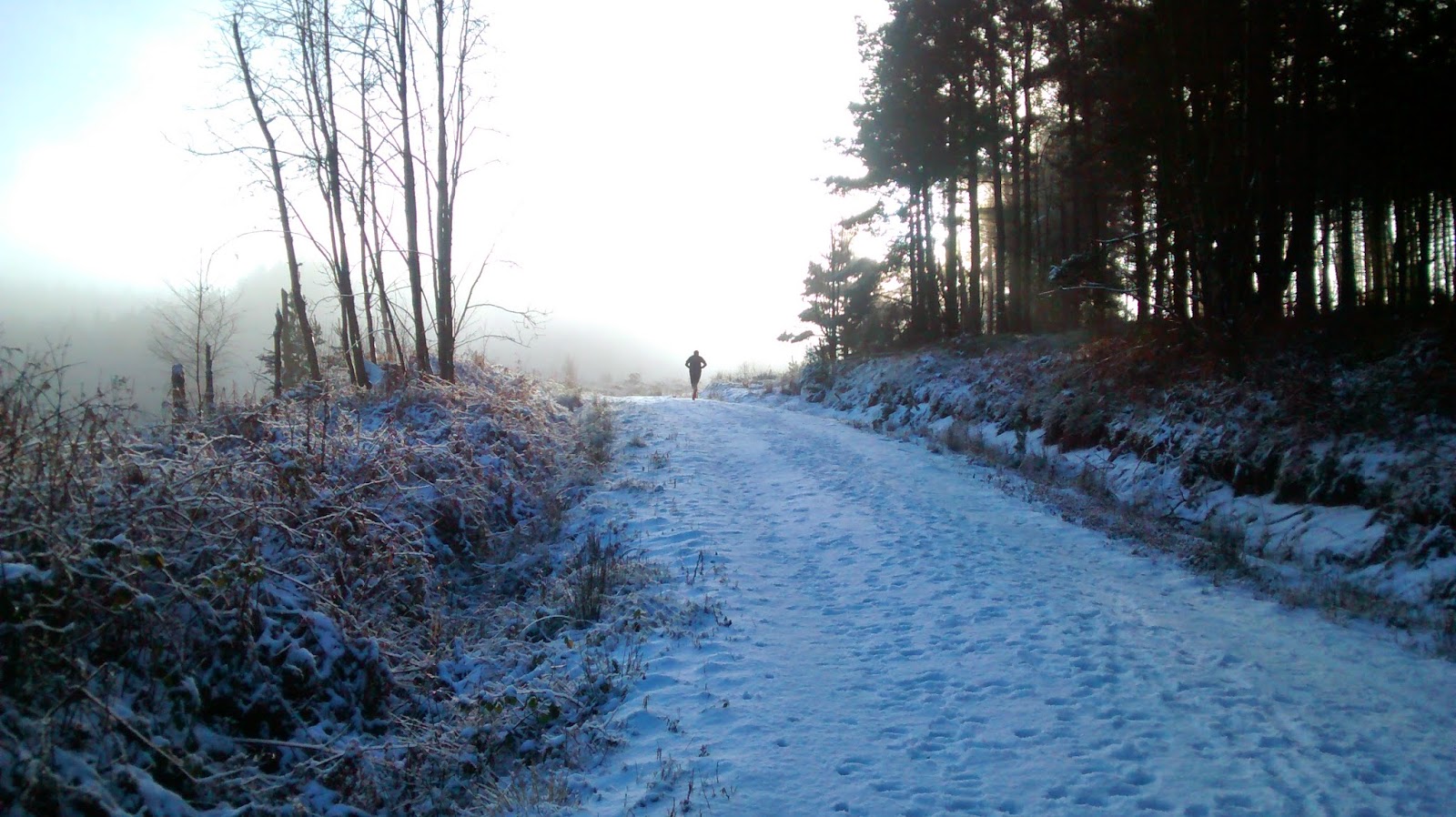 I had a look through the records for this race. I had lost count of how many times I've done it. My first appearance was in 2006 and this would be the sixth time since then. I reached the dizzy heights of 7th one year.

They changed the course in 2012. It was a three lapper with a finish that plunged through a thickly wooded, stepped ravine which was great. It's now a 2 lapper with a finish that's on forest tracks and a little less frenzied. The second lap is longer than the first and it takes the runners up to the top of the moors, out of the woods and along the south side across the heather before returning to the woods and along a wide forest track. Its difficult to get lost and there are usually plenty of dog walkers out and about. 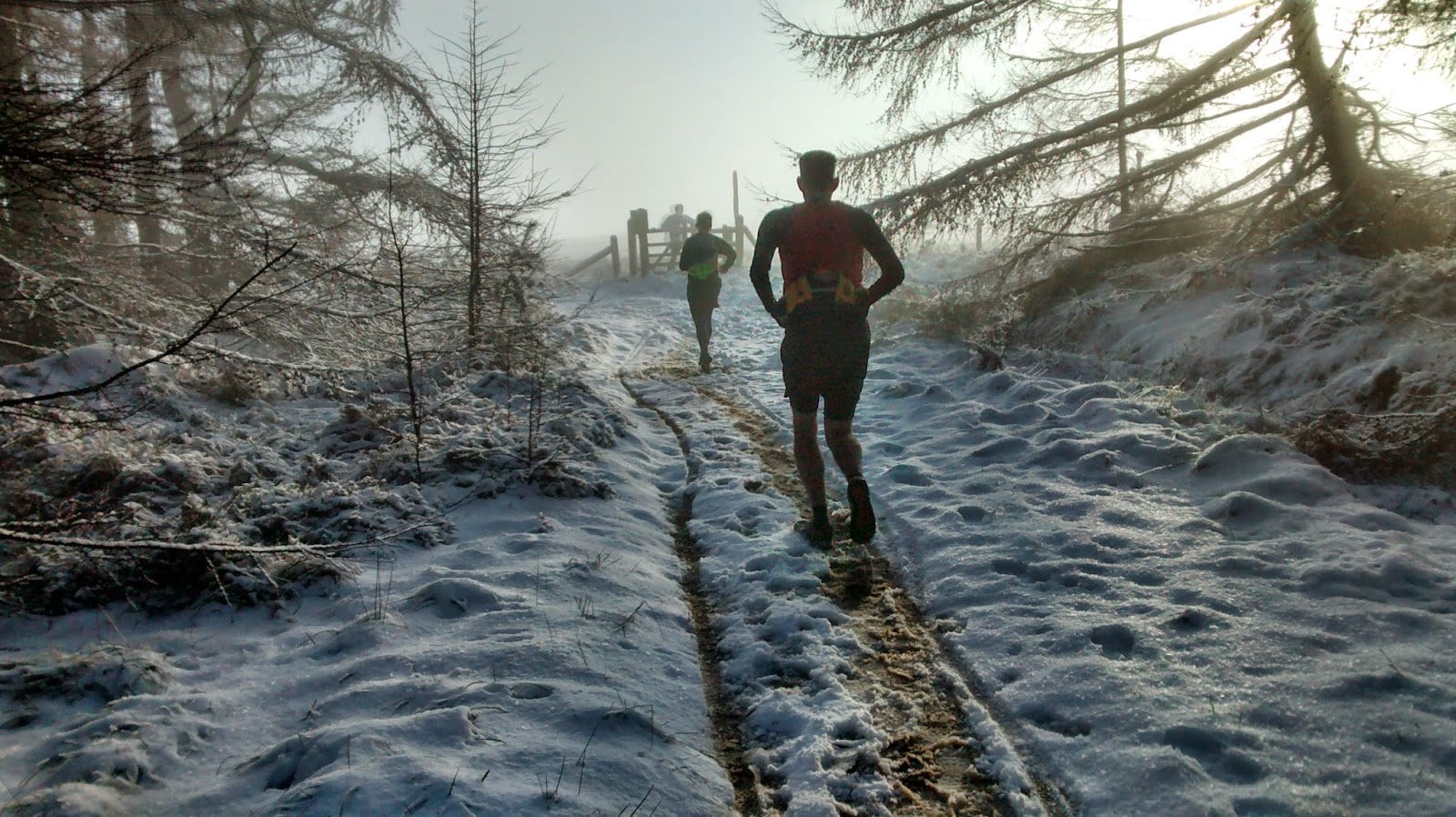 The field seemed smaller than previously and perhaps 130 set off. I fell in behind Emma Bain of NFR who has beaten me in the last 2 fell races. She has an easy style and steady pace that seems to get results and I stayed with her for most of the first lap. 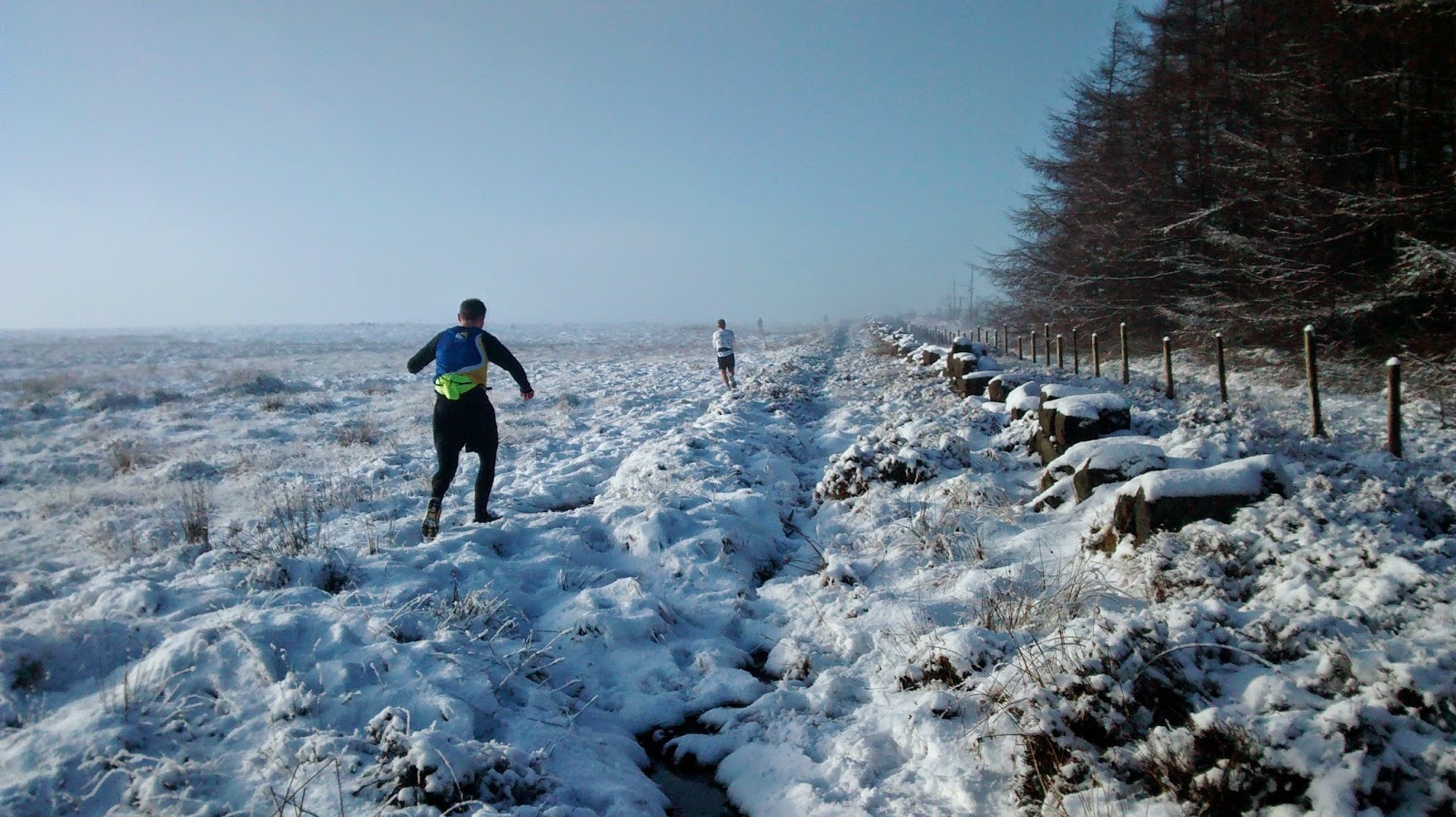 On the second I had caught a couple of glimpses of some nice landscape shots. The sun was low and some patches of grey freezing fog clinging to the trees. Looking behind me, there were only 2 or 3 around, so moving up toward the moors, I saw the hazy low sun beams forming walls of sunlight through the woods and thought it was time for the camera phone.  The first runner (in a pair of old road shoes) who passed me agreed..'Nice day for some photo's' he said. 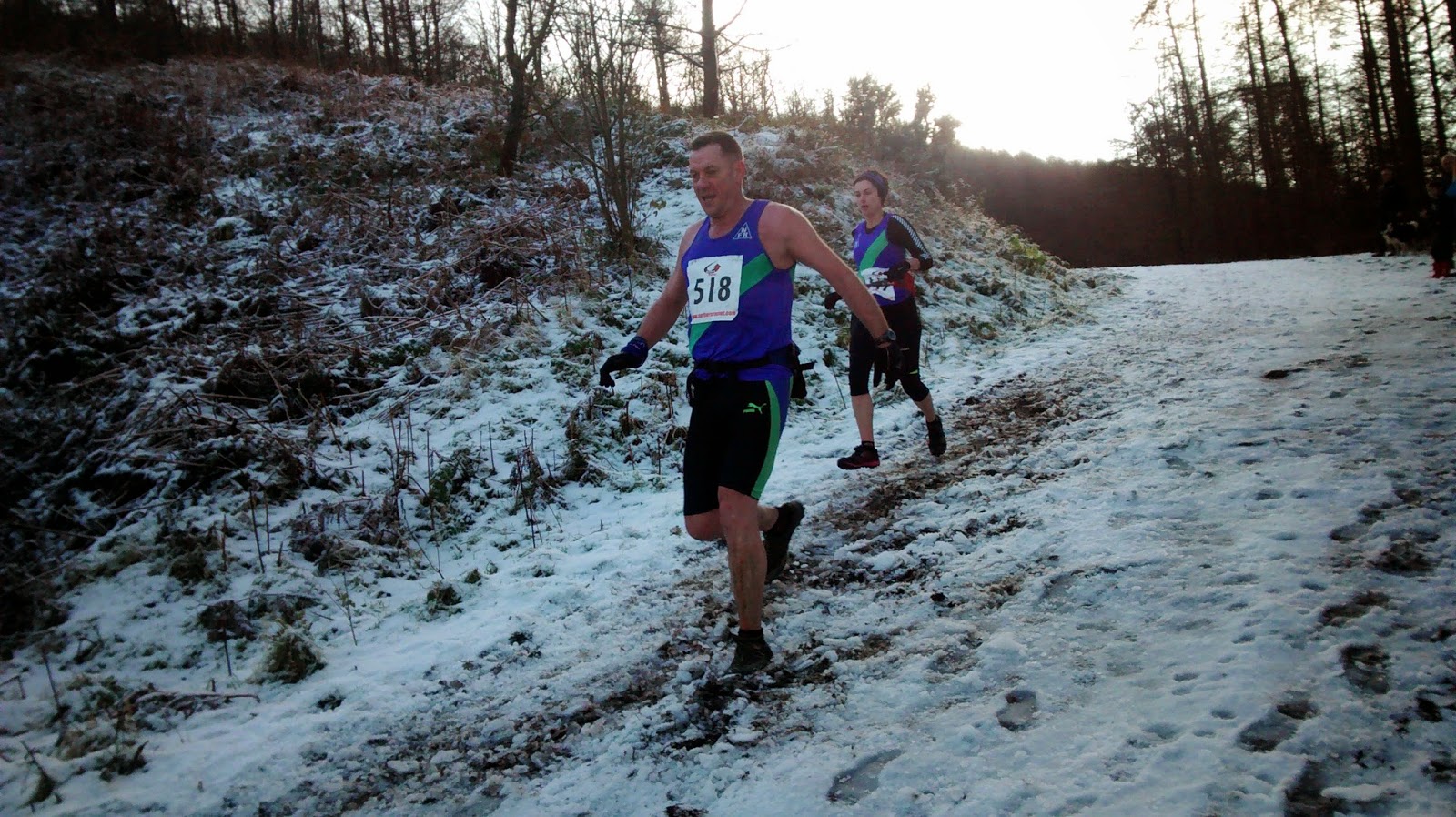 Reaching the top of the moor, there was around 2 or 3 inches of fresh snow and I lost another couple of places getting another shot or two, and then that was enough, and putting away the phone, I got my head down and ploughed on, catching all 3 runners who had passed me.

On the way back I was caught by a younger runner, but couldn't stay with him on the last wee climb and it was a long striding finish where perhaps 20 or 25 might have already landed. Watched the youngsters come in not too long afterwards and it was a cuppa at the presentation in the club. On reflection, it would have been a beautiful training run today up there, but I was pleased with the photos and enjoyed the run out. Nice event from DP and Esk Valley.

Hexham Hobble: A One Day Classic 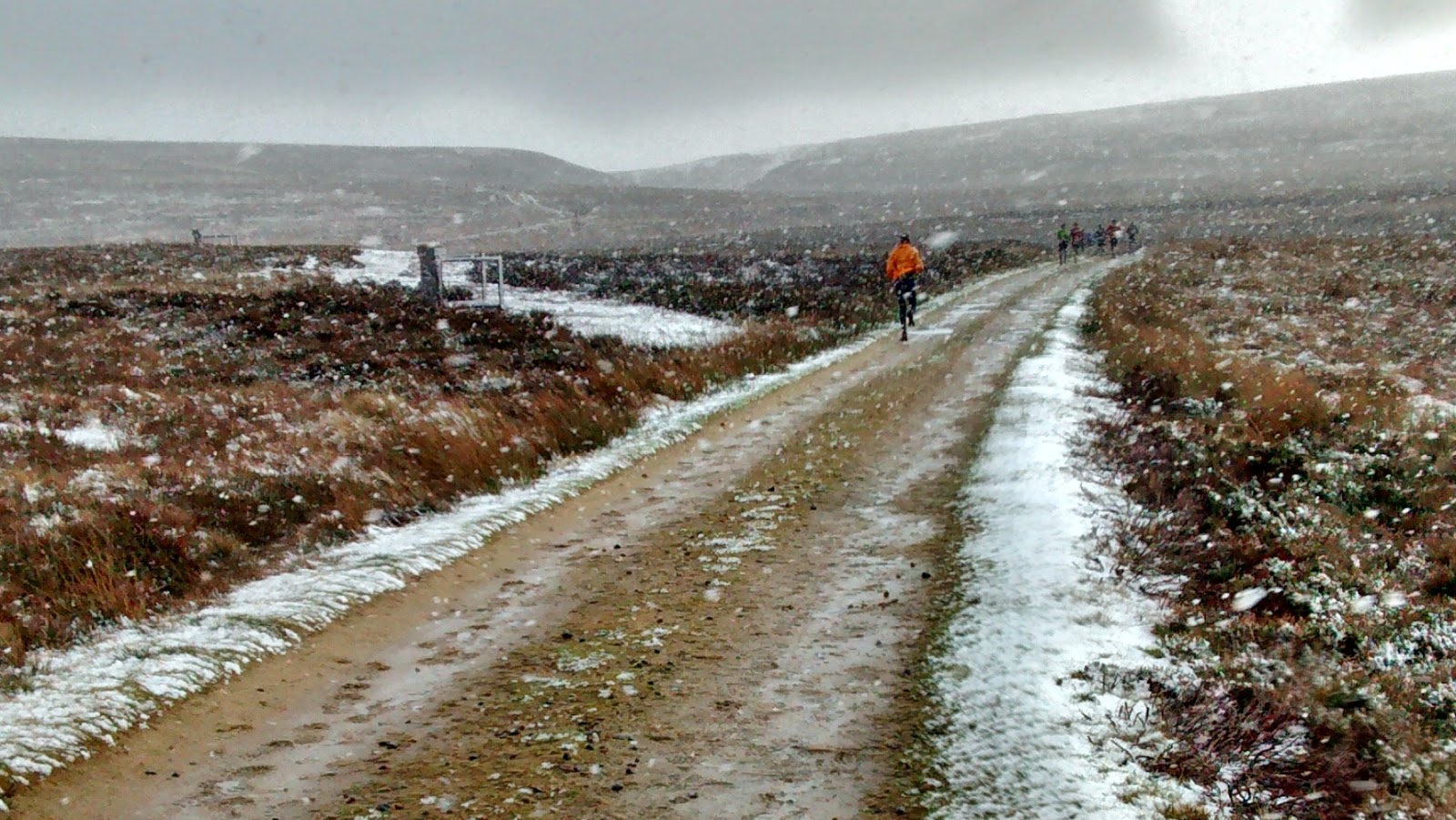 The Hexham Hobble fell race is the Paris-Roubaix of the fell running world.
That's the conclusion I came to, today, after 4 miles of loose cobbles over the moors on a December day with horizontal snow whipping my face like I was a whipping boy.

I was well wrapped up for the foray, had all the gear and had decided at the outset that the phone-camera was going to make an appearance through the run. It becomes an excuse then not to bury yourself and instead, you start lifting your head to see what shots are available. A crutch of sorts.

The youngster came out with me today and she finished about 8 minutes behind so I was pleased with the overall results over this 10.5mile, C class (ascent), mid distance race. Got past a few early on, but fannying around with the camera can really lose you some time. That tripod was murder. A few got past later on. I miss my Salomons but have been told Santa is on the way with a new pair. Not a day I would have chosen to wear shorts. Finished close to 2 blokes, but couldn't be bothered to race to the line with wearing the Mile More fell shoes which were cheap and good on the gravel and muddy peat, but no spring at all on the tarmac stretches. Pleased to see a few out from the club. The cake stall at the end was heaving and the results out sharpish. Deacon Blue tonight.
Good day all round, and I will be if I keep eating these cakes....Well done to Allen Valley for the day.