In 100 years time, social historians will be able to look back to this era and recognise it mainly by the exhausting clichés that are currently doing the rounds. But thankfully, you won't find me indulging in this mindless behaviour. Absolutely not, luvvie; I'm taking this blog to the next level; it'll be a short essay that ticks all the boxes....I can see you stretching slowly, remorselessly for the scalpel. me too...
I've been back in the wars; lets face it, it wouldn't be 2016 unless one vague medical condition followed another. broken ribs, suspected broken wrist, cold, more cold, blah, blah, blah. Poor health and bad luck are the two squires to the 4 horseman in my book. Of course, its all relative, and someone out there will tell me I don't know I'm born, but it sure does cramp your style. 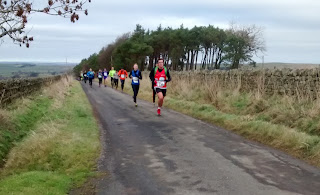 I turned out for the last two Cross Country's, one at South Shields and last week a wee nugget of a course near Hartlepool. But my form has not only deserted me, its been sending me postcards from abroad. On the front are pictures of it sipping pina-coladas, pictures of it on the sun-lounger, pictures of it pouting and showing its tanned bare behind. Training has been very patchy and not helped by an eye infection which the eye doctor told me on Friday might take a few weeks to clear up. She suggested I put gel into my eyes every night; As I have a habit of doing this inadvertently with running gels, aiming for my eye was not going to be a problem. I have to say the eye people were rigorous. I had blue dye, yellow dye, more blue dye and more circling sparkly, bright and coloured lights than a night out with John Travolta. Sandy, cant you see? No drugs supplied, but plenty of soap and water prescribed. 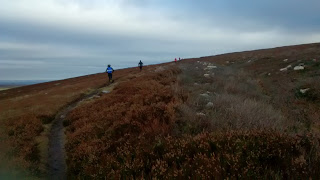 No cycling, but gentle running possible. As a result, todays outing was the Hexham Hobble with the youngster. Ten miles and a steady romp around the moors and some tarmac in rural Northumberland. Around 200 turned out for this pre-crimbo stocking filler and an excellent turn out from the club. A huge display of cakery was on show prior to the start, none of it making any effort to hide its modesty. I waved on the youngster at the halfway mark (she's not getting any postcards from abroad).
It was cool and muddy and that strength sapping sort of a day out. In the last mile I had slowed to a snails pace and had around 6 passed me, but was happy enough trotting into the finish. A quick change and then had to wait for little miss speedy to pick up her 2nd place woucher. Some tea was drunk, some cake was scoffed and a jolly nice event it was too. 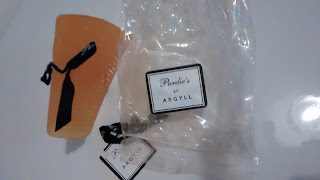 Soon, I was back home before you could say 'to be fair'. I was driven to destruction in the chemical repository that doubles as our bathroom looking for soap. There were many products that purported to be something like it, but my search was to no avail, until at last, I came across something that looked like cheese and was from Argyll and smelt like lemon and honey; Whatever it was, I lathered it around the various crevices and have promised myself a trip to Imperial Leathers headquarters to make some sizeable seasonal purchases.

I am going to lie low for the rest of the month and get my act together for the Devils Burden and Forfar Half next year. Not another comeback? yes, its just what the doctor ordered.  As an aside, I like Pina-coladas (and getting caught in the rain.)