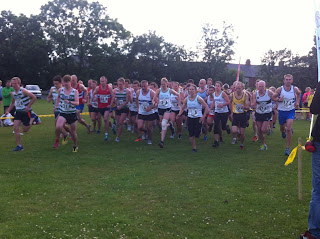 Rocked up at Lockey Park on the edge of Newcastle for the Weestlade Relays. Limited to around 60 teams consisting of a senior, a vet and a woman runner, this event is set around the refurbished colliery spoil heap at Wideopen. The heap has been landscaped and looked pleasing bathed in a late evening sunburst.

We arrived early and nosed around. I helped myself to a cup of polystyrene coffee. Soon, the throngs arrived and we got our numbers. I was running with fast vet Phil W and my young 'un. Keep it in the family, eh! After a lengthy talk on the line, a compact posse took off across the field, then out along the flat, grey gravel track lined by Hawthorn and Blackthorn. It was the old rail line and wagonway before that. The field began to stretch out and there were plenty ahead of me. After cutting through a buttercup meadow we climbed up the mound and I got passed two runners, but on the way back along the 2.5 mile route, I couldn't reel in the South Shields and Tynebridge runners ahead. I was going well though, and back on the fields where the cheering crowds were, I snatched a further place before crossing the line where I made a series of distorted faces as I tried to gulp in lung-fulls of clean, Tyneside air.
Grabbed my top and did another 4 miles around the course shouting at the other runners from the club as they made their way around the route. Good fun and, as with all relays, with added randomness. We finished 13th which was very respectable. The presentation was prompt and printed results issued super quick time. Good Work Claremont.
With Cronkley Fell Race in County Durham at the Weekend, its going to have been a busy June.
Posted by AMcD at 08:20 No comments: 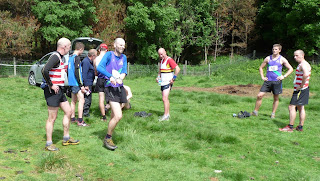 When Auntie Aggie asked casually over the breakfast table if I was running today's Windy Gyle Fell Race, I stared into my ricicles and, after a pause, I looked up and mumbled
'probably' through a mouthful of half crunched, sugar frosted puffed wheat.
'You best get on then, fat boy', she added nodding to the clock above the cooker. Its never been the same since it melted when she had a misguided effort to cook by fondu. Mini Armageddon with cheese. 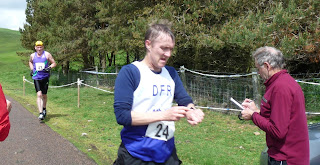 I've had most of the week off and only just got back, nursing a tight hamstring. After a little telephone diplomacy, another two sturdy competitors had been identified and I packed the car and took off up the road with my two passengers.  This fell race is set in the rolling Cheviots in the height of summer. Its mostly on grass, but has short stretches of rough track and tarmac as well. 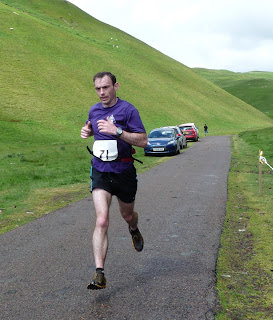 Around 70 turned out in warm sunshine to sign up. The sky was very busy though, threatening and soon the heavens opened just before the start.  I saw Fred Smith of Saltwell up at the front as we ascended the first climb and having covered around 3km, I passed him and aimed for his team mate who was ahead with a NFR runner. I hooked up with them at Murder Cleugh, the site of an infamous murder in 1610, and then it was onwards to Windy Gyle and the cairn, near the site of an iron age fort and meeting place for the border wardens to settle their differences. 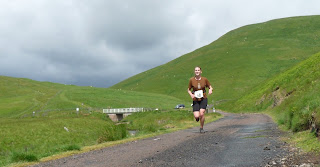 Around the halfway mark, NFR man had put in some distance but I was still with Saltwell man. As I tagged behind him I noticed his ironman tat on his calf.
I concluded that he wasn't going to be any sort of pushover.  As it was, it didn't matter. With the long descent looming, he pushed on, on a short rise and before long there was ten or twelve seconds between us. The descent was stunning and all easily runnable and punctuated with styles and it didn't seem like 8.5 miles before the cars and the gurgling Coquet came into view. With no one behind me, I stepped gingerly over the last style at Trow Road beside a former drovers inn at Slymefoot. 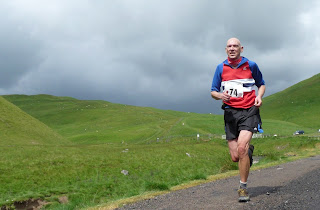 I crossed the line in around 1:09 and grabbed the camera to fire off a couple of shots before the rain came down in rods and I took shelter in the car. It looked like most of the field got caught in the torrential downpour. One runner was heard to say afterwards 'it was revitalizing'.

Having now ran this three times, I think this is probably one of my favourite fell races. With a bottle of beer for first in category, we returned to base having taken in some beautiful and isolated Northumbrian countryside and a little of the Borders history. Quality. 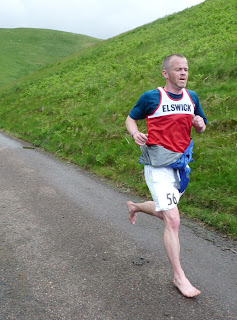 On Safari: The Alwinton Fell Race 2013 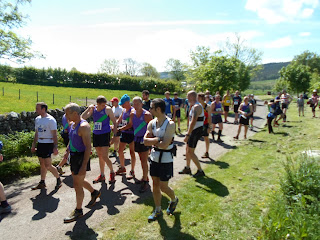 I ran the Alwinton Fell Race on Saturday. It was a 14 mile, 2500ft safari in the sun baked Cheviots. I had made it my target to run this. I didn't agonise over the distance or the terrain. Never gave my knee trouble a thought over the last few weeks. Just assumed I would run it and get through it. Didn't count on the heat though. The last fell race was in Fife all those months ago...March....in the snow.

The 'Alwinton' is a race that's suffered in the last few years, clashing with other races, but it used to pull in a very respectable field. This year, Traprain was on, north of the border, and the Blaydon was on the following day, so it did well, this year, to pull in about forty runners.

The prizes are hand-crafted mugs. They're worth the £6 entry and pasting yourself all over the hills for (if you're, in any way, in contention).  Too often prizes are forgettable.  I shouldn't carp really. I'm not a pot hunter. 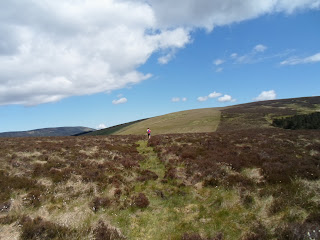 I've ran this twice previously. The first time I got well lost with another lad while up with the front runners. This year, I was slower but surer of the route. One or two runners floundered around me momentarily as forest tracks split or markers were less than obvious, but I ran with an air of nonchalance casually pointing left here, right there.in my sweat soaked orange bandana....It would have been nice if I could have ran a bit quicker,  though. 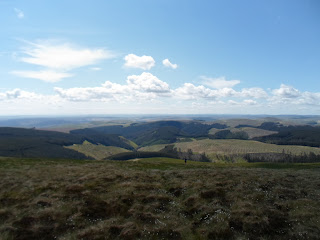 Keith Cooper organises this to coincide with a walk that takes in the course and so there's no shortage of folk on the route or Mountain Rescue volunteers manning the various
checkpoints.

With the sky a deep blue and the sun beating down and pushing up the mercury into the 70's, I made sure I stopped for a proper drink at every water stop. I even stopped at the stream on the way back. I ran on the way out with a lad from Moorfoot. Its up and up along the grassy Clenell Street and then onto rough gravel tracks along the side of the woods northward. After around 5 miles it takes an east turn onto the heather and hummocky grass. It' blidy hard work. The peat was crusty but with a soft centre and I lost my footing frequently and spent plenty energy trying to pick my way along the best line I could find up Bloodybush Edge and Cushat Law.  By the turn,  the Moorfoot lad had pulled well ahead and I had been caught by unattached Mr Spanner. We yo-yo'd for a while and made good speed down the forest track off the hills.  I'd felt my hamstring tighten down the backside of the Law and knew not to push too hard, given that 2 hours is as long a run as I can manage in the hills without beginning to cramp. 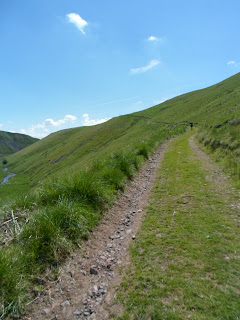 The coarse cobbly, scorched and angular surface was hell on the soles, but it didn't last too long. I told unattached I was stopping for a drink from the stream. He ran on. When I started again, he had pulled a little way ahead, but up the last rise, his progress stuttered a little as he was unsure of the route, but he didn't let me get close enough to give him proper directions...there was a lot of mid distance shouting and pointing. I'd run ahead, then he'd start to run, ensuring he kept his distance. Once he realised he could see the village, he took off like a hare. I was happy to let him go. Young and eager.

Crossing the line I sat in the stream for a good while. Later, I celebrated with a shandy and won myself a nice mug for 1st in category.  Legs suffering from a bad case of Doms this morning though.  Nice event. Stunning views.

The sweet smell of the Tysoe Windmill 10k

My strategy of training in the woods midweek, and looking out obscure weekend village races paid off on Saturday. I found myself in leafy Warwickshire on Saturday morning following work commitments the previous day. Having bargained hard for a complimentary 2 hour spell of Wi-Fi at the hotel the previous evening, I googled the race calendar and located the Tysoe Windmill multi-terrain 10k. Tysoe is a tidy Midlands village, snuggled up between Banbury and Stratford upon Avon. Complete with thatched roofs and sculptured lawns.

The race involved an out-an-back course that took in Windmill Hill and stretches of road, farmers fields, woods and farms tracks.  I had banged out 9 miles on Thursday and a steady but hot 7 miles on the Friday night around Nuneaton, so I was keen, but not rested as I arrived on the Saturday morning in bright sunshine to the village green.  The sky was a deep blue and the foliage heavy and lush green.

I parked up beside the tennis court and watched the cars trickle in. There seemed plenty of villagers walking to the little marquee, set up as registration.  A raven sauntered along the grass, listening for worms, oblivious to the villages annual sporting highlight.

I signed up and had some banter with an older gent who talked me around the course. There seemed more marshalls than competitors as the 10 a.m. start beckoned. I warmed up around the green and soon there were a handful of like-minded folk doing the same thing. At ten, around forty of us were off and I settled in,  a little way back from the front runners.

After about a kilometre, I had moved up to 4th and the course veered left through a kissing gate and up through a field to the windmill. It was heavy going, but passing two, I could see the front runner coming back and, at the top of the hill, I caught him as he broke into a walk. A real give-away. I carried on over the ridge and through some trees and fired on down the hill. I lengthened my stride and just put my head down.

After a further mile after a long road stretch, before coming off onto a farmers track, I felt some anxiety about being caught and told myself 2nd or 3rd would be fine... very respectable, even. I hadn't even won it and I was worrying about it.

I was waved on by a few marshalls and then began the ascent back up the backside of Windmill Hill. As I came through the kissing gate I listened keenly to hear the 'clank' behind me from the next runner but it never came.  After stopping to check the route with a marshall, I made it back to the village and took top honours crossing the line in 45.20 stretching my spindly arms out like I had just won the Olympics. It ended up 6.5 miles in length with 500ft of ascent.

Celebrated with a cup cake and tea. If there was a race that justified getting my new Salomons dirty, then this result went along way to satisfying the criteria. I may retire now, and write my memoirs....
Alwinton fell race on Saturday. Chance of more medals.  Hope there's a good crowd there.