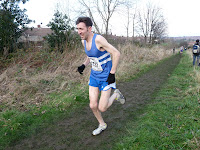 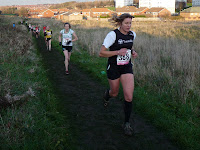 The Sun was up and sky was blue. In these days of uncertain weather it was a call to arms and stepping over the door step armed with the Salomons, I took my light sabre and ventured to Wearside to the North East Harrier League Cross Country at Sunderland. 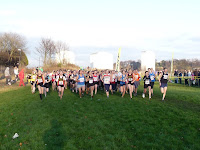 It's a narrow route and there was a bumper crowd in evidence. Its a good run out and I joined around 300 others for a wander through the sticky mud. Results up now on the RACE-RESULTS (link on the right-its a zipped file so you may need to download it first, then open it after). A few photos on link to the right!
Posted by AMcD at 22:08 No comments: 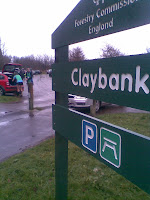 As the elite, club runners and fun runners stretched and imagineered their personal battle at the start line, I was, let's say 'taking in the view' elsewhere. As I passed the start line, organiser Dave Parry shouted 'you're 27 seconds down already'... It's a fell race, though, so it's about the placings not the time; right? at least that's what I thought as I made may way up Claybank past some of the backmarkers.
I did the Claybank West (5.5 miles, 1000ft of ascent on the edge of the North York Moors) 4 years ago and really enjoyed it. Its all on trail with easy gradients with only a little scrambling at one point.
I had my work cut out as I tried to claw back the lost time. There was a moderate breeze and some drizzle which together with the ponded water on the sandstone flags made for a Bon Jovi experience (slippery when wet-I know, show me the tumbleweeds). It didn't take much working out that the best route was the intermittent grassy track next to the flagstones and toward the end I passed a York Acorn and then a Wetherby runner. However, the next lad from NYM and whom I was gaining on was a little too far in front. Despite my best efforts to reel him in on the woodland track near the end, I finished just behind him at around 36.40 and 11th, also a little behind Minister (DFR) and well behind Steve Baldwin (Scarborough) who I beat earlier in the season at Mulgrave. It was still a good enough run though for a crate of Guinness at the prize-giving which was, as ever, very generous and puts many a road race to shame. Speke of Dark Peak won from a embattled Will Horsley(NFR). Caroline Pollared won the womens event from New Marske ladies Gordon and Neesam.
Posted by AMcD at 17:09 No comments:

We all deserve a treat now and again.
And probably, yes, you can get too much of a good thing, so I had some 'me-time' yesterday. It was a trip to the eye test woman followed soon after by a slouch to the dentist for a consultation. Lovely. Those frames that they put on you reminded me of a scene from the film Marathon Man. Thankfully she advised the eyes were good, although I would have to go some to develop superman-type vision. Now that would be excellent in foggy fell races where the mist is down or to see who's up front.
If only I could also discover the ability to freeze things with my breath I could stop all the speed merchants at the front of races and then mooch past nonchalantly, hands in pockets in my cape and red pants (on second thoughts superman probably hasn't got pockets in his pants - clearly didn't think that one through!) One website I perused suggests in a commentary on Superman that 'his ability to distinguish fields depends upon the signal-to-noise ratio between objects'. Some folk are really keen, eh?
Anyway, 50 miles this week and some of them even good quality miles, so I'm going to try a fell
race. The forecast for tomorrow is nonsense with lashing rain and high southerly winds, asteroids and swirling witches. Wonder if I should pack some kryptonite in my bumbag.
Posted by AMcD at 08:31 No comments: 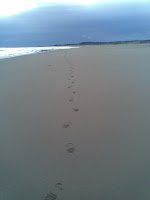 Spent 40 minutes padding along the beach at Cresswell this morning much to the dogs delight. I even managed to introduce a small hill session in the form of 10 reps up a sand-dune.
Ok, it was a pretty lame attempt given that the dune was about 10 metres high, but I didn't want to overdo it. I realise that any form of running in the daylight is almost infinitely better than running round the town in darkness. It would have been nice to get a longer run on the sand in, but I ran out of time.
Posted by AMcD at 11:44 1 comment:

The bounce is gone

After an easy 14 miles with the lads yesterday I stole away in the early morning today for 10 miles around the country lanes in the rain. There seems some more weight to come off before I regain that whippet like physique and a face that my mother says 'needs a good feed'.
The bounce in my road shoes has now gone so a visit to the trainer shop is imminent. If the weeks training goes well I might have a run out at the Clay Bank Fell Race down on the edge of the North York Moors. I see there's a new club arrived called Esk Valley down that way.
Posted by AMcD at 17:28 No comments:

Results from the Heaton Harriers Memorial Newcastle 10k can be found at
http://www.heatonharriers.org.uk/mem09res.php
Posted by AMcD at 19:01 No comments: 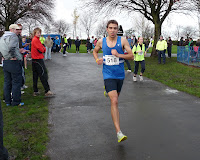 Morpeth's Johnny Taylor powered his way to a convincing win at the Newcastle Memorial 10K and left the 500 or so field standing. He won the event by what seemed like a huge margin in a time of 30:04 from Team mate Ross Floyd and James Buis of Heaton 3rd. Dave Kirkland of Alnwick was 4th. 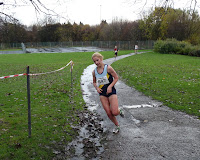 The ladies race was won by Claire Simpson (Chester Le Street) going one better than her placing in this years Sunderland Pier to Pier race (Photos coming soon...) 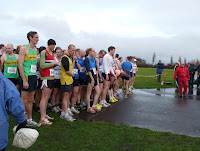 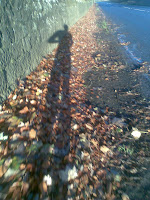 Instead of an exotic bus trip, I took a lift to the sleepy hollow of Seaton Burn and spent the 10 miles running home staring at my shadow. I never knew my legs were so long or my head so small!
As I lay in the bath afterwards perusing the Fell Runners Handbook (as you do) it seems that you can't put on a winter fell run unless you build in some alliteration (see last entry).
Now I don't want to be getting all obsessed with all this stressed syllable grammar malarkey but Three Tops, Wrekin Wrecker, Hexhamshire Hobble, Copeland Chase; I ask you, is there a secret code buried in this well fingered tome; are some of the marshalls who stand at the top of mountains in all weathers more than they seem and is there an ancient soiled relict buried deep along the way which holds a terrible secret (there's a joke in there somewhere!) - If I find it, will I be able to retire as a gazillionaire if I can crack the code.....I think we all know the answer to that one.
Posted by AMcD at 11:18 No comments: 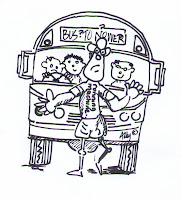 Having looked at the photos of the Templeton 10 miler last Sunday, I think I got away lightly (and dry) when I decided not to race last weekend.
This weekend some of the guys are doing the Exhibition Memorial 10k in Newcastle, two 5km laps of a flat park run which, if the weather behaves itself, has solid PB potential. However, the weather seems to have an attitude on board at the moment and unless it starts to get with the programme, we may need to take it along for a consultation in a white room with a serious looking bespectacled professional. It may end in therapy.
Managed 10 miles yesterday lunchtime around the lanes and felt as fresh as a faded foto in a Falkirk fanzine (I love a bit of alliteration!). The thought of making the long trip to Tinto for a 30 minute hill race or Guisborough for the 3 Tops fell race filled me with dark thoughts of dread and despair, never mind trying to get the misfiring running machine round a leaf strewn Newcastle park in under 36 minutes. Now, in my present condition, that would be a laugh. So, instead, once again I'm contemplating a bus trip tomorrow and a long slow run back from an unknown destination. What excitement!
Posted by AMcD at 08:27 No comments: 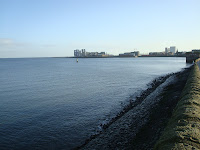 Spent the weekend in Edinburgh. After a few beers in Stockbridge on Friday night, jogged along the seafront down by Granton and Leith for an hour. In the afternoon it was a long trek up Carnethy and Scald Law before dipping down along the reservoir in the sun. The town was jumping in the evening with Halloween celebrations and loads of punters in fancy dress. Very entertaining. 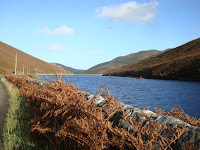 Was tempted to do the Lasswade XC this afternoon, but with all the rain there was a distinct possibility of me submerging somewhere along the far end of the course which is muddy at the best of times; better get out for some miles soon.
Posted by AMcD at 12:39 1 comment: