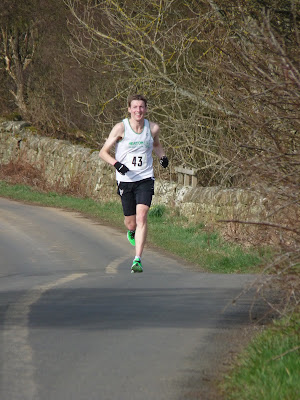 Afternoon delight. Well, actually it was morning and on the bike I caught the lads out in the lanes for their 2 hour special. I headed on to Hartburn village on the route of this new half marathon. After 10 minutes the first of many appeared from around the leafy lanes.

As the runners passed me at around the 5 mile mark the sun was burning the clouds away and most runners at the Run Northumberland Half marathon were a wee bit overdressed. I soon found a small pile of discarded clothes beside my bike. James Buis rattled by in first position and even managed a smile. Perched on a dry stone wall and trying to get a few interesting angles I fell off the wall onto the road which with my dodgy back and cleated cycling shoes gave a few of the runners a moment of high comedy, probably the only one on this rolling but very scenic half marathon. After dropping of the various garments at the nearest marshall, I made for home to upload these. 18 on the bike followed by a hard 14 run this aft. Photos on the photo link (click on picture -right). Results up somewhere later. 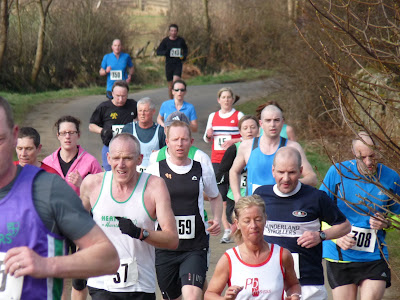 I've clocked in around 30 miles running this week. Some have been good miles, some bad and some have been run at a pace little more than a jog.

Aggies new mantra is 'if you can't run , knit'. She's recently taken up knitting and sits happy in her own world purling with a number 11 under the stairs. Its a pain when she gets a new hobby. She's been waltzing round 'casting off' that and 'binding on' this. She was wittering on about a dropped stitch this morning. She says confidently that she's knitting a tea cosy, but from what I've seen no-ones got a tea pot that size.

The new regime of crispbread, celery and water hasn't yet materialised owing to a combination of poor attitude, a burgeoning biscuit barrel, a wide selection of jams and marmalades and a string of social's over the last (and next) few days. This included a trip out for a spicy curry last night. I seem to be tapering successfully but without the training beforehand. The carbo loading also seems to be a wee bit premature.


I put myself through some unusual and awkward angles at the pilates class on Thursday night. I must have been trying too hard, though, as last night I was stooping and creaking with lower backache like a downstairs character from an old Dickens novel. Any notion of a 'park run try out' this morning was binned. Instead I'll try an hour on the bike in the drizzle and then maybe a slow hours running later through the woods. 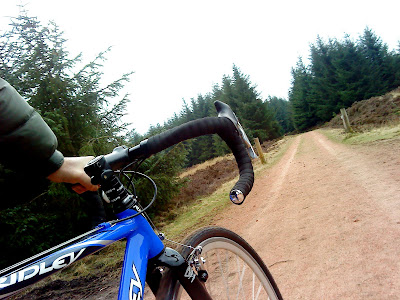 There was a chink of light yesterday when me and my domestique loaded the bikes up in the car and took off to Thrunton Forest, the local hub of mountain biking in the area. The electric blue Crossbow, at last, made its debut appearance and got its fat cyclo-cross tyres and cantilever brakes dirty albeit only for 45 minutes along sweeping forest tracks. They were mostly surfaced with red felsite and it looked like there had been some tree felling there recently, the tracks being flattened by HGV movements and easy to ride along. Good fun though. Still looking at doing a sportive or time trial this year. Anyway, cup of tea time .....
Posted by AMcD at 08:56 No comments: 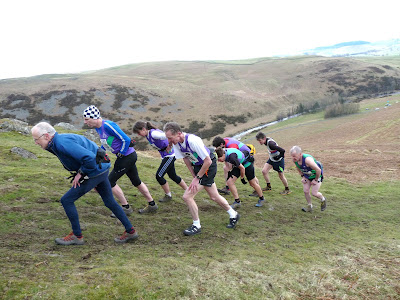 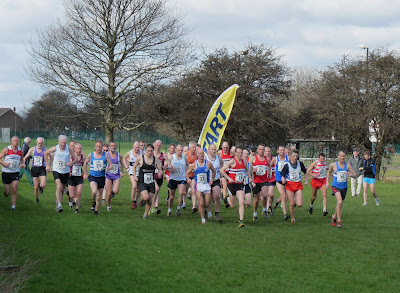 North East England Veteran Athletics (VAANEE) Cross Country Championships 2011 at Monkseaton.... Photos at the link below..
http://www.flickr.com/photos/34070057@N06/sets/
Posted by AMcD at 14:51 No comments:

Another day in Northumberland 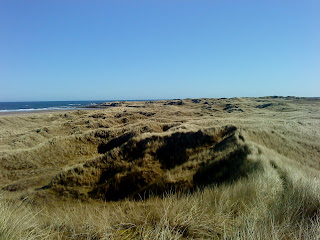 With the short survey at Belford completed by 10am, it seemed a shame not to drive 5 miles further north and park up at the causeway which leads out to Holy Island. Its Norman priory stands on the site of an Anglo-Saxon monastery founded by St Aidan in A.D 635 when King Oswald was doing the rounds in the locality. The castle was built in the 16th Century but only saw action during the 1745 uprising. 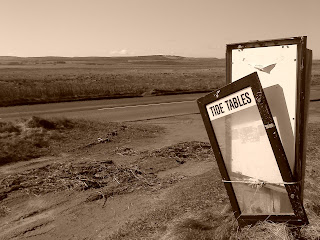 The island attracts plenty of tourists during the summer but its quiet during the early months and todays offering was an easy 45 minutes across the tidal flats and dunes before turning back into a brisk westerly. Its easily the farthest I've jogged since my lay off a month ago. I had to make sure I checked the tides and made it back to the car with 10 minutes to space. I reckon my legs have had plenty time now to sort themselves out and with the longer nights coming in, I'm chomping at the bit to get back into shape. The amorphous look doesn't suit me! I'm not completely ignoring the slow road to recovery and am adding cycling and pilates to the schedule. 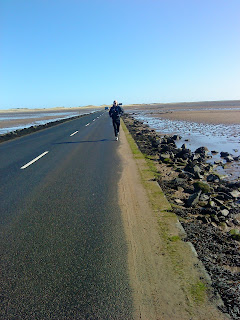 An old lady stopped half way along the road and we exchanged photos and our appreciation of what a beautiful place it is. Getting back home for a cheese toastie I caught my shadow on the kitchen wall and can't help feeling I'm turning into Nosferatu. 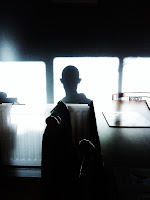 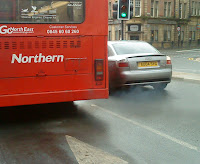 After my rub down on Thursday, I had a walk-jog-walk in the woods yesterday and spent most of the yesterday evening trying not to be pre-occupied by my so called recovering calf tear. Watching a scary movie, I supped my glass of British red wine (8.8%) and had to remember that it wasn't blackcurrant juice. This morning after 2 croissants, coffee and a heavy downpour, I was in that 'will I or won't I' dilemma. A bit like having two margarines on the go at the same time. Two or three miles didn't seem too far, surely?
In the end I adopted my own advice which was that the speed of an injury recovery is partly (or probably) mostly dependent on the patience of the athlete. So, instead I decided to go out on the bike as there was no wind and calfs are only bit players when it comes to pedalling.
As it turned out, I had a really enjoyable 2 hours to Newcastle and back, with a slight tailwind developing on the way back. Snapped a photo of a bus belching out clouds of exhaust. The sticker on the back said 'Cleaner Engine, Cleaner Air' - cleaner than what....? The potholes were all over the place as I ate up the road but I imagined I was riding the Paris-Roubaix and that this sort of saddle torture was par for the course. It was, therefore, with some irony that I actually found myself riding along a cobbled street before turning back. 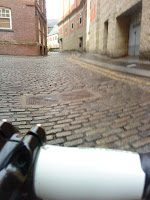 I stopped at a corner shop on the outskirts of the City for a can of Irn Bru and choc bar and happened to meet the former owner of Steels Bike Shop in Gosforth. We had a good natter about mostly nothing but on the way back I reminded myself about the racing team Thornaby CRT-Been Bag he used to sponsor and had a few ideas about re-forming the club under that banner.
The ipod was on shuffle and I made my way back to a strange mix which included Harry Chapin, Rush, Katy Perry, and Donna Summer. Nice to get back out, whatever the sport and whatever the music.
Posted by AMcD at 12:30 No comments:

Watched a programme on Ron Sexsmith (singer/songwriter) last night. Didn't know who or what he was until last night. Wandered out today (to the computer) to download his album. Enjoying it much.

Meanwhile, a trip to the Trimpell 20 has been binned following a visit to the Physio today. With it goes my entry fees and 'free' t-shirt and medal and, no doubt, the possibilities for me of making up a crack team who might have had a go at the team prize. I was going down with the Morpeth Wolf Pack. They'll be one grey (or bald) wolf short tomorrow. Then went shopping. Why is everything soooo expensive now.

Like a few others out in Blogland I've been out of action. Legs that don't work are a pain. Its only when you're not running that you value the release running offers, not to mention the craic.

I've rested up all this week. Stretched occasionally and told myself to be patient. I opted for the gentler touch of a new physio. She was good if a little pricey. I wasn't writhing in agony. I don't know if that's a good thing or not. She also offers colonic irrigation and something called ear-candling. She advocates irrigation. 'Good (she says) for lots of things'. I said if it meant I could at least run the London Marathon and take 5 minutes off my time, she should book me in. I'm back for more leg rubbing later in the week. But at the moment as far a running goes, I'm a spectator.

The computers playing Rose Royce now so I'll clear off. Its clearly time for my ear candling. Do I have to bring my own wax?
Posted by AMcD at 20:00 No comments: