Baking, but not in the Kitchen...

'Grantchester's' on the TV and I'm sitting here not taking much notice. The fishing guy who had a brief singing career is in it. I think he'd make a good replacement for Vera, the Northumbrian detective. Talking about Northumbria (see that smooth segway...you don't deserve it), its been an unusual week, with only 27 miles in the bag all week, but six of those coming from the Cookson 10k at Whitley Bay and 6 more from the Allendale Fair Trail Race, yesterday.

The Clive Cookson 10k is about the fastest course around these parts. On Wednesday night there were around 300 overly warm p.b. chasers, looking flushed on lap one and becoming nicely toasted during the second lap of this two lapper. It was searing, it was.  My blue vest was ringing at the end.  I scraped a time just below the 40 minute mark, but only just. Even though I ended up 2nd V50, it was tough and a personal worst for some 10 years. But my aim was a sub-40 and it would be churlish not to be relieved that I scraped a performance of sorts. As I gasped my way to the finish, I kept telling myself to keep my technique. I spent the last mile with my eyes glued to the runners shoes in front. 'Just get me to the end' I thought. I think most folk had a tough time. The goody bag had a t-shirt in it. That's all. Just a t shirt....bit of a waste of a goody bag.  Would we have to pay 5p. Nice T shirt though.

Allendale Fair day 10k was just as hot, but with 650ft of climb and an 'out and back' affair, it was quite a different dish. Unlike revenge, it wasn't a dish served cold....not so much searing, more sweltering. With only 50 entrants and half of them women, we kicked off this modest Allen Valley Striders event at 11am. It was about 25 degrees. The rain clouds were gathering, but the heat hadn't broken. The course is a mile of tarmac road up into the moors and 2 miles of baked track that runs across the moor and makes up the back end of the Hexham Hobble fell race, held in December.  I found myself, early on, in 3rd place with Speedy Joe on my shoulder (the daughter) and a bloke from Ponteland Running club. I pushed on up the hill leaving them a little behind. Had I gone too soon? Were they just not trying? Who is Kaiser Sose?

I ground my way across the dry sandy track. It was rock hard. Dry as a bone. Drier even.  A dry bone. A couple of nesting Curlews flapped about as we trogged by. I didn't think that the 3rd mile could be so long. 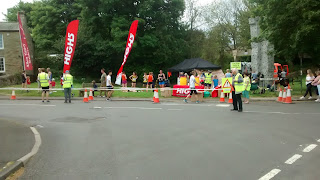 I was running into a light headwind and could see the two front runners a minute ahead through the heat haze. At the turn (a marshall and her lone red cone) we were in a hollow and as I turned to head back, I was met by a wall of heat.
Cooking.  Was that Dante I spied at the side of the track? Was that Anonymous Bosch travelling incognito on the ridge getting some ideas for his latest oil?  I struggled back up out of the gully as the rest of the field behind me passed coming the other way and making their way to the turn, the hot bollard; glen furnace; the dip of sweaty misery..... 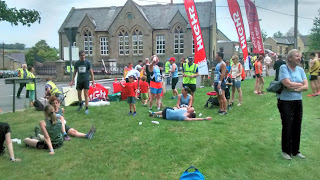 If I could keep up the pace, I would snaffle a podium place, but Ponteland runner was suddenly there. The heat wasn't a problem for him, clearly. And then at mile 4 he was ahead and making easy distance between us.  I expected 'Speedy' to come past also, but she couldn't summon up enough zing. In the event she finished 20 seconds behind and first woman by a good 5 minutes, so that's good enough. We all got a wee water bottle.

It was a good natured presentation, ironically next to the graveyard and next to the hall 20 minutes later.  I won £10 for best dressed v50 and then because of my stylish gait, a pair of socks in the spot prize. Tidy. We toured the stalls in the village and, armed with a cuppa, we watched the strongmen do their thing. We left with thirsty five quids worth of vouchers and stopped for chips at Haydon Bridge, cause we're hard-core!

This morning I was going to get 13 miles in to maintain my 40 a week habit, but my heel and Achilles are having an Allendale hangover, so no sport today.    Best get myself in shape, though, as its Black Rock 5 month next month and in preparation, I've a wee notion to return to Yetholm for the hill race, where I've enjoyed a tussle or two in the past.