I heard the youngsters were at it again, entering road races without my permission. Mrs Mac casually suggested that we go along and take part....you know....run as well. It was a bank holiday weekend and there seemed no harm in the idea. I slowly warmed to the notion. Tynedale 10 miler....yes, that seemed a reasonable morning out.

This year, rather than the Hexham to Ovingham point to point, a new course had been devised by Tynedale Harriers. The race HQ was Hexham race course. I'd been there a few weeks earlier to do the Wiggle 'Hell of the North' cycle sportive. Properly described.
As I drove the athletes to the course, the sun was rising and it was looking like a really nice day. Not much wind either. I was aware that the course was likely to be hilly, but I assumed that whatever sharp rises that were encountered on the course would be offset by low slow downhills that we could get the time back on. This is an unwritten understanding between organisers and runners.

There was a good crowd finding their numbers among the 600 or so that had pre-entered. Some of the roads were closed, and I thought anything below a 1:08 might be good, given my patchy training of late. There was chip timing and as we lined up, clubmate Jim A. lifted the tape and invited me to slip in near the front.

I knew the first mile would be a steady downhill, but the subsequent downslope steepened from mile one to mile two and I was soon up with Paul Redman of Sunderland. We were still going down and down and struggling to keep up with our legs. We had a brief exchange, some garbled words and then I dropped my gel, so had to come to a halt, which took several metres and then nip back and pick it up, by which time the group I was in was away doon the hill chasing after their legs and looking for the anchors.

The first 2 miles were too fast, but then, as we reached the valley, we hung a sharp right and then began a climb for 2 miles. Rather than carrying my gel, I decided after 3 miles to consume it. However, I was puffing so heavily that the goo sat in my slack jaw and after a while I was aware that it had begun to dribble out of my gaping mouth as the hill went on and on. I was too busy looking for oxygen and checking my medical records. My eyes had glazed over and my lungs were mush.

By the first drinks station I was puggled, realising that the gradients were unusually steep and the climbs long. I was passed periodically by runners. I saw one girl heave at the side of the road and another faster clubmate up ahead stopping and starting, clearly feeling out of sorts. The road dived again, then we reached a ford. If you reach a ford, you know the road out in any direction is precipitous and so it was. Up and up and up. By 6 miles I had begun to generate a reaction, a feeling of resentment that I was too far in to bail out. I would have packed in, I think.

At 7 miles another water stop provided a much needed drink. By 8 miles as we dropped down again I knew there was the same 2 mile rise to the finish that we had previously come down, but at the arrival of the start of the rise, marked by a sharp incline, I shook my head as I watched the two guys up ahead walking up the crest of the hill. I was in survival mode, but had slowed to a shuffle. Quite an unusual course selection, I mused.

I finished in 1:14. One marshall asked me at the end if I'd do it again.
perhaps...with a jet pack or perhaps on a milk float.

Later, as I tried to rationalise the day, I wondered if the organisers had found a good HQ and then tried to find a course to fit a 10 mile route. When I got home I had to have a lie down for an hour. Maybe, in the words of Viper from Top Gun, I'd been 'holding on too tight'.....maybe I need a chill pill. Need to chillax.  Aunt Aggie had a laugh when she heard and suggested I might like to take up baking or perhaps chess, but then adding that I didn't have the intellect for either.
Six beat the hour. Stars. The winner admitted it was the hardest 10 mile race he'd ever run. What a daft carry on. 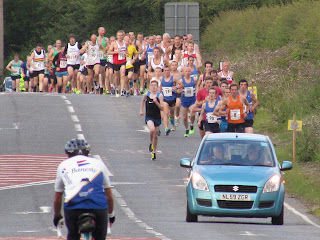 Nipped out last night to the Morpeth 10k. Always well attended, a 2 lapper that generates some reasonable times. Around 300 ran.

The light is always tricky for photographs, but using the little Canon SX510 I bought last year, the long rangey ones were pretty good but a bit grainy. If I'm going to get back into snapping races I think a better piece of kit is required. The now defunct Panasonic FZ28 I used in the past was bigger but it was a very nice mid-range camera. There are some folk wandering around these places with very big lenses indeed...but I rarely see their piccies on the web. See what you think - click on the 'gallery' or link below:
https://www.flickr.com/photos/34070057@N06/sets/
Posted by AMcD at 09:24 No comments:

The Cost of Everything, Choices and Schadenfraude 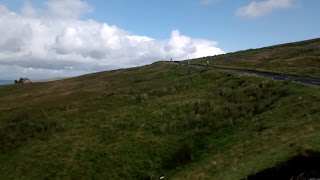 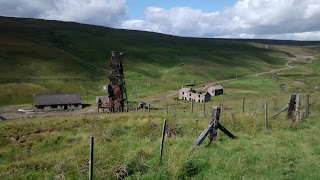 Me and Nick A (bad English I know) got out to Hexham on Saturday morning for the Wiggle Hell of the North Sportive. Given the hilliness of the routes on offer, we opted for the short one at 53 miles. It was grey and cold at the start and the field was, well, modest. We paid our £26 entry, this great lump of money apparently guaranteeing me a medal, as much flapjack as I could eat on the way round and a t-shirt.  We set off with rain jackets on and plodded past a few who had set off earlier. One rider who had come down from Edinburgh caught me back up and explained that I wasn't using my gears properly. I sat there and listened, thanked her for her advice, and was proud of myself for buttoning my lip. Didn't bother talking about riding national events or routinely taking on the 40% gradients at Leicester or Meadowbank velodrome's. Maybe this is where I've been going wrong all these years.
The event wound its way down to Weardale (lead mining country) and Rookhope in County Durham and back into Northumberland through Blanchland and eventually the sun made an appearance. The hills were chunky enough for a Saturday morning. By the end after 3 hours of riding and one hour sitting at the water stations eating flapjack, we worked out that we'd only done 45 miles and so had taken a wrong turn near the end and missed out a dog leg.  Still 4500ft of climbing. Quite enough. 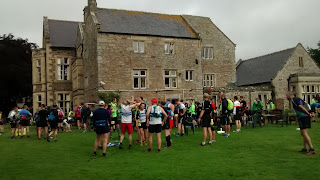 Spent the rest of the day enjoying the rare sunshine. One of my young lodgers had made a Spag-Boll on the night. I wandered in and gave it the Allymac taste test. More garlic and wine required I announced, as I glugged more wine in and reached for the garlic cloves. As I chopped the garlic, Aunt Aggie wandered past and picked up the wine bottle....peering at the label over her ragged, musty balaclava she muttered 'better be a good Spag-Boll this'
'Hows that' I asked (more poor English).
'Cause that there wine is a six year old, twelve quid Bordeaux' she replied, adjusting her snorkel to make herself heard. 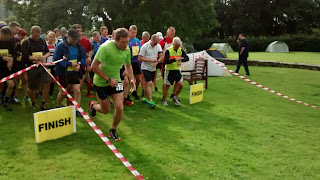 Sunday's madness was the Clennell Trail Race, a 10 mile race held in the Cheviot badlands. The two youngsters were going for a head to head and I thought I might join in. At £15, another wallet-scaring event organised by some private affair rather than a club, I have noticed that entry fees for some non-club events are generally ramped up and frequently fall short at the other end with no presentations or elements that appear to have been dropped or forgotten. Most need to do better I think. 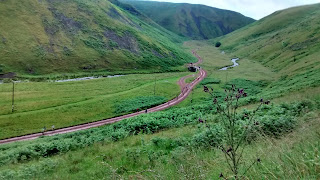 That said, this was a nice run that encompassed much of the Alwinton Fell Race and took us up the hills over the Clennell Track and then down to a forest track that went on forever. As I had traced the course route on the back of my number and marked down the checkpoints, I noticed that there was a left turn a half a mile before the end and that it added a good mile or more eastward.
I spent the run chasing Keith Murray of Teviotdale who had got around 30 seconds on me, but he was coming back at 8 miles just as a NFR and a South Shields passed me. They had been talking behind me for 2 miles and that really wound me up. If you think chatting in a fell run to strangers who are sweating and puce with bumbags flapping around is a good idea, then think again. A real distraction. Thankfully South Shields man passed with NFR man in pursuit, but I thought that I
was still top ten.
Then at the bridge with the three in view in front they just carried straight on along the red gravel track to the finish rather than cutting left and even as the young lady sitting on the parapet sat pointing to the side where the green arrow said 'go down here' (but obviously in sign language). 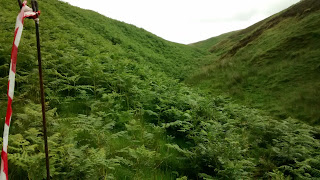 I veered left and entered a steep grassy ravine. As the running came to an abrupt halt, even the flies that had been buzzing overhead in the humid conditions had left me alone. It was difficult to run along this section. I was cursing my weighty bumbag which had been bouncing loose throughout the race. As I sought a route through the reeds and ferns,  I remember saying to myself 'the organiser's having a laugh here'.  However, the schadenfreude I was experiencing at the 3 others going off course kept me going as I realised I might get in 4th rather than 7th. Does that make me a bad person. yes, I think so. Even the bleached sheep skulls and bones scattered among the lush grass couldn't dampen my spirits.

The route kicked up sharply and I could see down the ravine to two others behind me, so had to keep the pace up as the hill dropped down and increasing my pace to a pathetic shuffling run, I face planted in the ferns. No damage other than a scab torn off my knee from last weeks crash. The pain was welcome as I tried to man up and ploughed on to the finish. The garmin said 11.7 miles - funny 10 miles that then?"!?

Another event, another t shirt. The rest of the clan finished in 6th and 7th position, so my form is improving slowly. Celebrated the day with a quick drink in the Cross Keys at Thropton. Worth a visit if you're in the area.

Oh yes, and the Spag-Bol was even better on the second day.