The field was smaller today and I had hopes of improving on my 19th place mid-week. For some backward reason, British Cycling only see fit to publish the top ten finishers according to the organiser for the previous race at Bishop Auckland, but he sent me the full results by email.  I said to him that any result for me was a good result.

Todays event was for half an hour of racing within the Hartlepool headland. Manageable. The place looked very presentable today and there was a good crowd out, many in fancy dress. I suppose that included me in my pink top and lycra. The circuit included a small climb, but it was generally flat and apparently the roads had been closed. This was news to some residents. There were a few close shaves as the occasional car and pedestrian wandered down the road, oblivious to would-be-Wiggins bearing down on them at up to 40mph. I got talking to one or two of the locals who seemed in high good humour and were readily making recommendations as to which pubs to visit for my return trip. 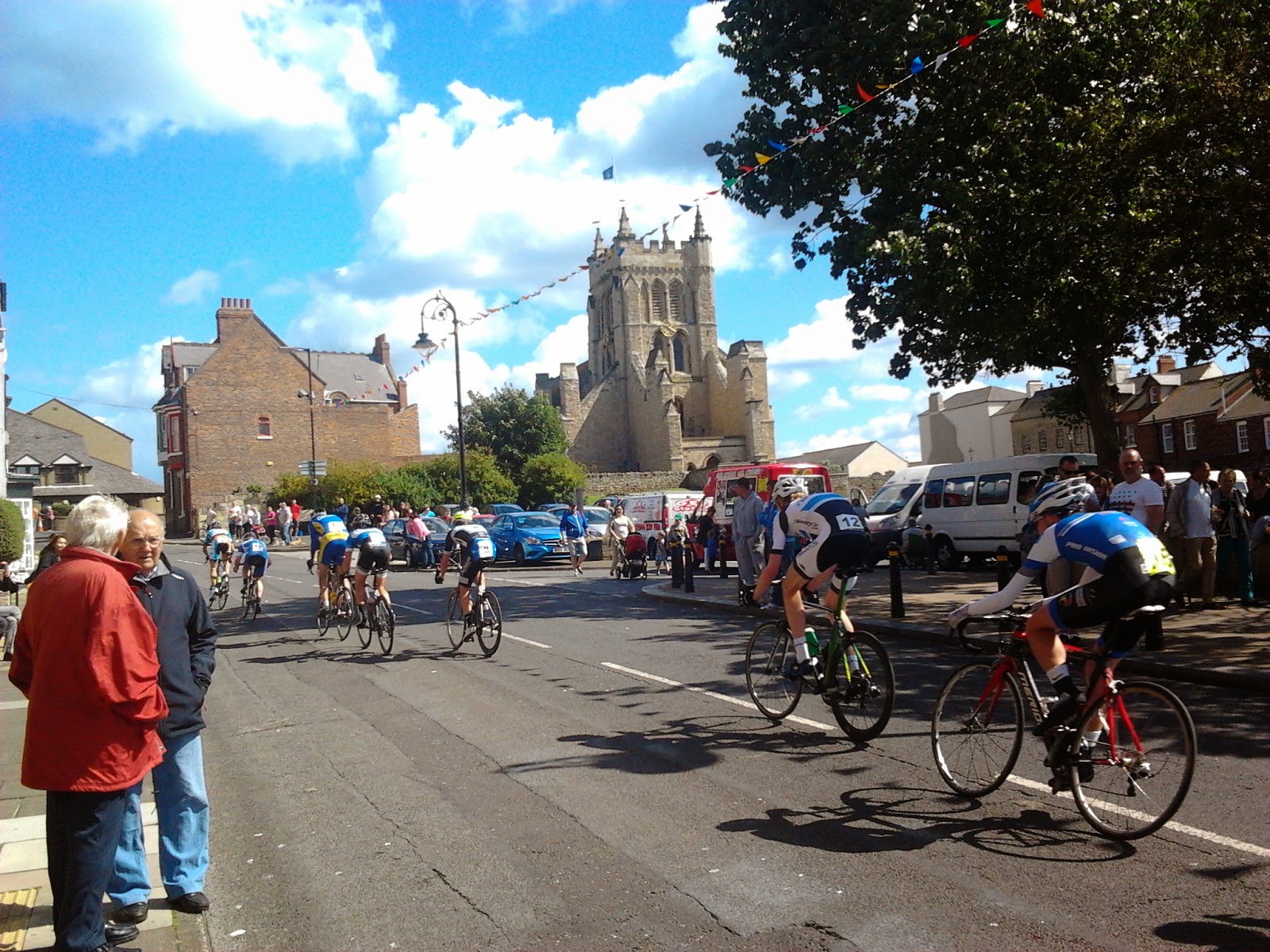 With only 21 in the field and all over 40 (masters), we got off to a easy start, a neutralised lap behind the motorbike. The second lap arrived and I almost hit the front, sailing along with a huge tailwind. However, the 3rd lap saw two go off the front and the pace lifted markedly. A couple were already off the back. Soon me and two others detached, and then it was just me and the Manilla Cycling Club man (I think they are the local club there). We watched the compact peloton creep ahead, but once there's a gap into a headwind, its tough. We spent the next 20 minutes working together and finished without being lapped, so encouraging progress on that front. With an average speed for the race of 22 mph, its near my top end. The bad news is the fast lads in the next race were travelling at an average of 25mph, so evidently much work still to done. I celebrated my 30 minute adventure with a ninety nine, and another 25 miles on the bike when I got home. Not sure what the next event is, but it would be a pity to lose the initiative. The forecast's pants tomorrow. 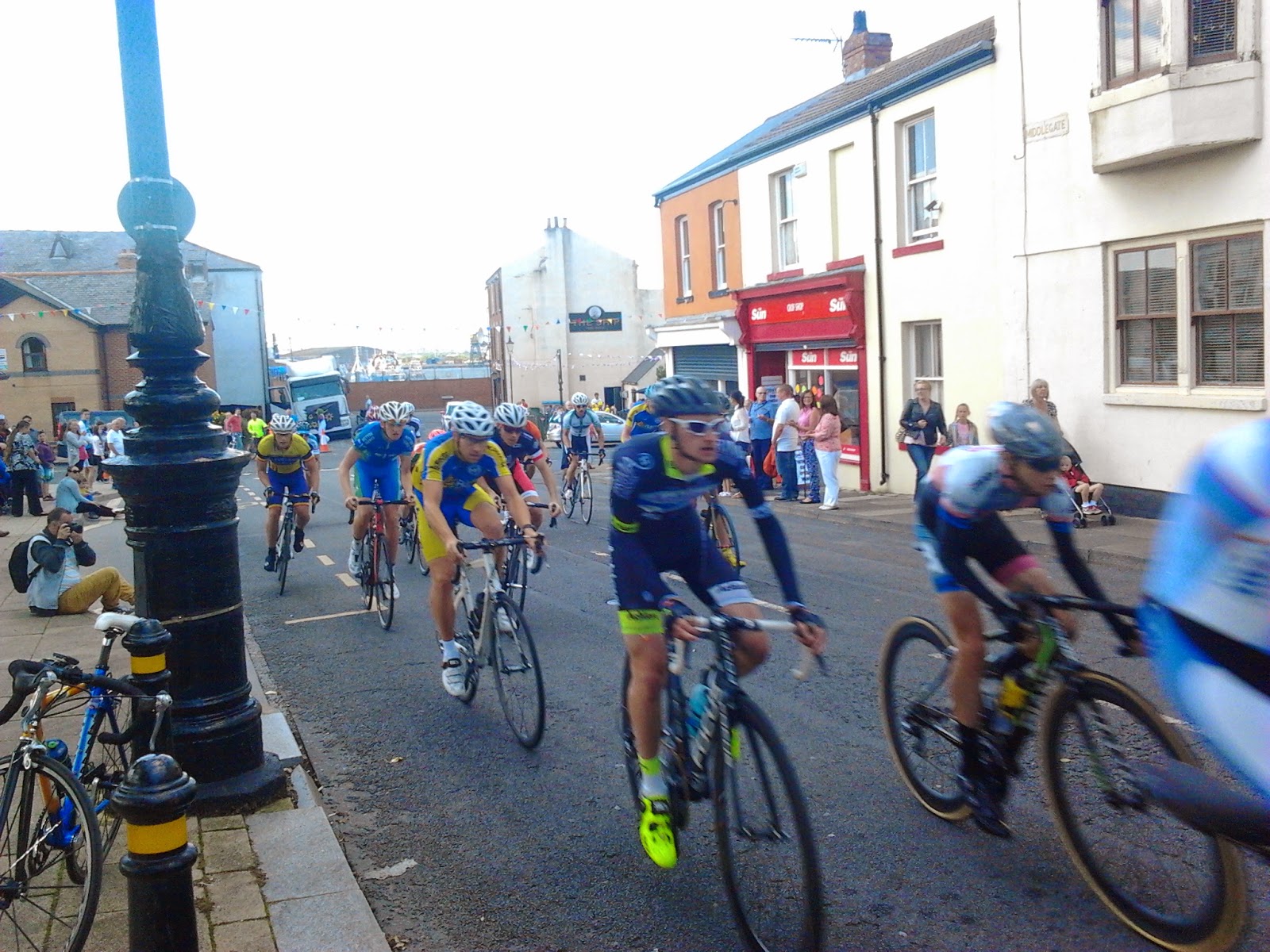 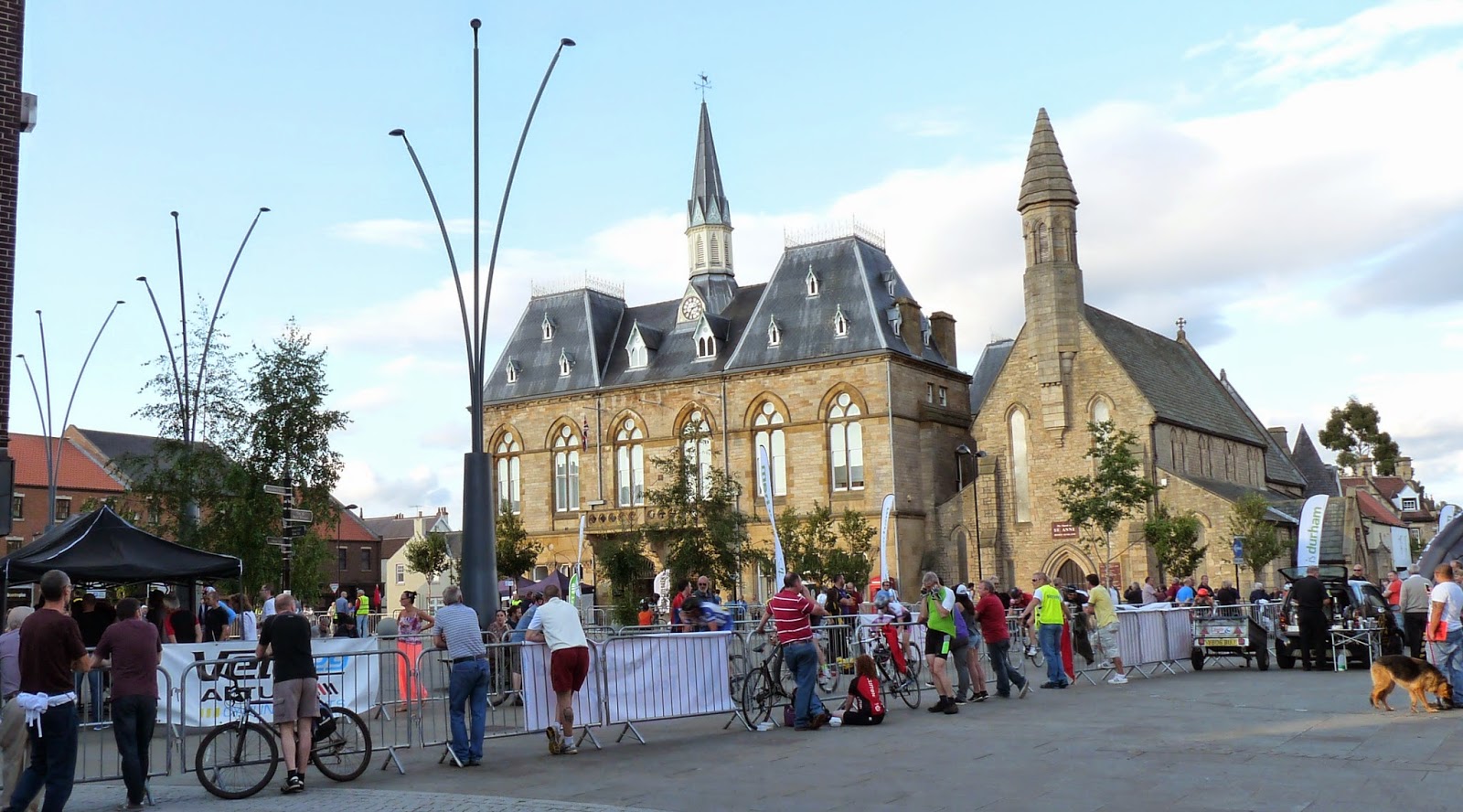 My adopted life of leisure came to an abrupt end tonight when I lasted almost 25 minutes of a 45 minute city centre bike race at Bishop Auckland. They call it a criterium (or crit). A kermesse in Belgium.

With the rain lashing down all tropical like this morning, I was happy that it remained that way in the vain hope that the race field would be smaller and slower, but it was a bonny night in the old Durham town.

I dug out the old Condor and clipped myself in for what we were about to receive...mostly pain, racing heart rates and breathlessness; a bit like climbing the stairs with your shopping. 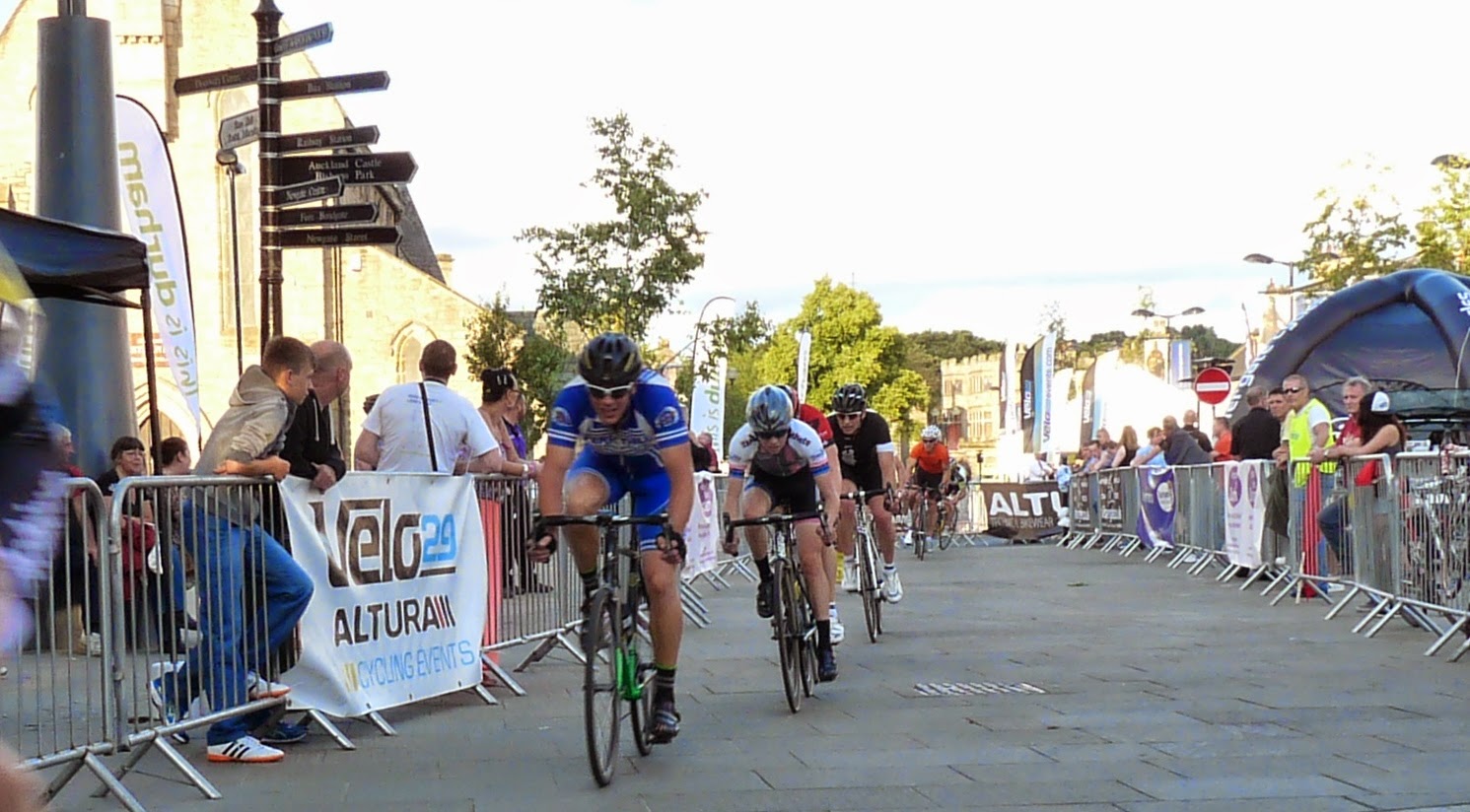 There were around 40 riders and a good crowd in attendance. The 3 streets forming a flat circuit was fenced off and we even had a motorcycle outrider. Men squeezed into impossibly shiny, dayglow lycra and riding bikes that cost more than half the cars on the road.

My best lap was the first, as it was neutralized, and I lapsed into a casual swagger, if such a thing is possible on the razor that goes by the name of a saddle. The commentator was giving it some over the speakers and after a handful of laps I was not at the front, but not at the back. It was around lap 12 or somewhere that one of the two others I was with said 'here comes the field' as the motorbike came past; but a lap later they still hadn't caught us. And then, at the chicane, rider 1 overcooked it and came down clattering on the flagstones, rider 2 followed and I realised I was rider 3 and had nowhere to go but eat some pavement. I was soon up and off though leaving the other two to sup some dust. I was a little disappointed when I got myself together that I was not bleeding from the arms and garnering the sympathy vote or the prize for gutsiest rider. 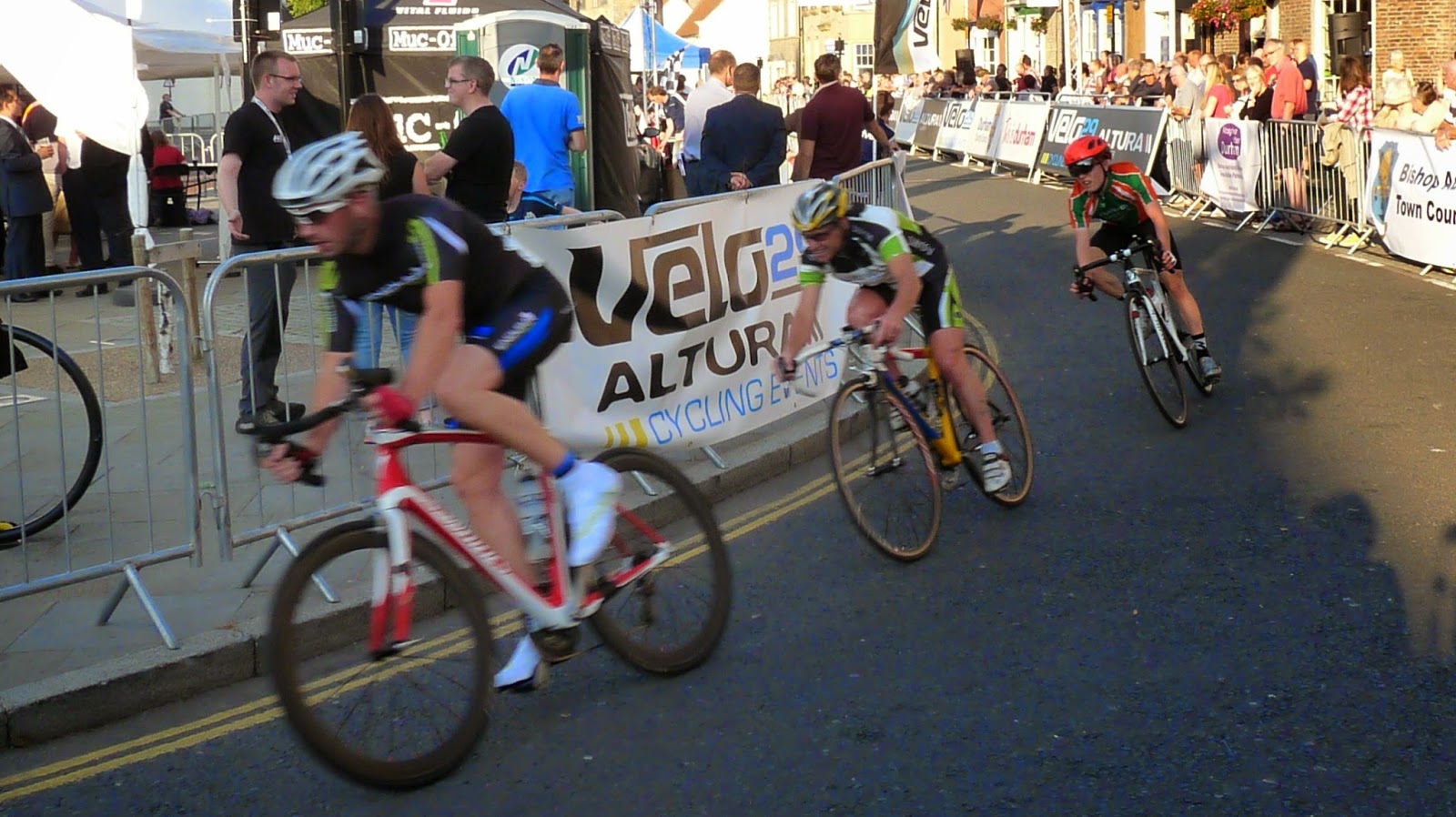 After 9 miles, 23 minutes and who knows how many laps, my luck ran out and the twelve man peleton came past. Lapped, I had the good grace to pull up and cash in my transponder and numbers for my racing licence. Not to be put off, I'm having another crack at the weekend; this time it'll be through the mean streets of Hartlepool. I'm in pretty good shape; just not twenty one. Let's crack on anyway.
Posted by AMcD at 23:00 No comments: