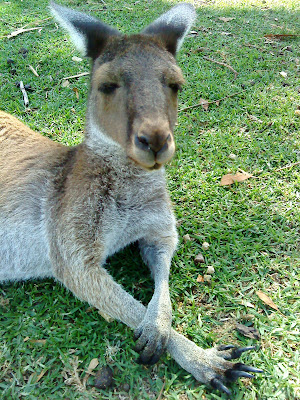 Up and out early for some mileage. Along Rockingham Beach front passing a posse of power walkers. There are so many of these guys presumably because its too hot to run. Kept it very steady down the coast road of Safety Bay and parallel with the long sweeping Warnbro Bay. As the sun continued to climb Port Kennedy was going to be 3 miles too far, so cut back up along Reed Street stopping to drain the last of the water bottle and to take my vest off to stick on my head. It was about 12 miles in 105 minutes but hard work. Even the Kangoroos have the sense to stay put during the day.
Its wall to wall housing down here. Home for juice, cereal and AFL (Austalian Rules) on the tele. Now that's a hard old game.
Posted by AMcD at 09:18 No comments: 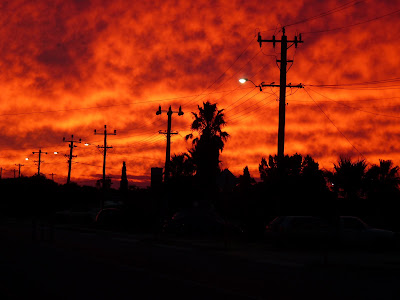 Spent a few hours on the beach today and fell asleep with my hat over my head and top straggled over my chest so the beetroot effect that developed this evening was patchy in the extreme and I looked like I had some medical condition.
Took off at 5pm as the sun began to set for a 70 minute jog along Rockingham Beach, up past Richmond lake through Anchorage village and then north along Lewington Street in the darkness. There was almost a full moon and the locals seem to disappear after dark so very few pedestrians around. Even with the cool evening air I came back lathered.
Posted by AMcD at 20:04 No comments:

We identified this one a little while ago and were up with the Cockatoos for the 10k that starts on the Spectacular Perth Riverside. The sun was low in the cloudless sky casting long shadows as we parked up on the south side of the Swan River and crossed the bridge. 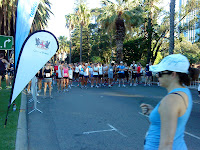 There were loads of joggers and cyclists using the wide paths through the park. Around 1800 runners started and I found myself quite far back. I spent the first 2 or 3k ploughing past one or two hundred runners and felt pretty good until the 5k mark. Predictably though there was no fooling the body and with the sun beating down, even early in the morning, I began to toil badly. By 8k I was watching the shadows on my shoulder expecting a busload to be passing me and was a wee bit surprised that only 2 or 3 got by. The pace was lamentable in the last 2k as I struggled to maintain the effort. Finished in 38:56 around 60th.
We lolled on the short grass among the crowd and soaked up the atmosphere of a run on foreign soil and after an hour the prize giving took place. To my surprise I was awarded the M45 category and got a nice medal and Asics voucher.
I read later though in some Aussie blog that I was 'the guy' who got the medal even though I wasn't first. I read even later (when the results came out) that I was 6th 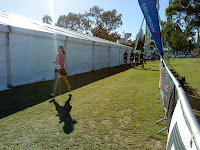 in category, so I guess they awarded me the silverware because I was the most knackered looking vet or the runner with the raggiest style!
Wandered off to the Houghton Winery in the afternoon and forgot all about running.
Posted by AMcD at 18:35 No comments:

Strangely found myself transported to the very rainy north west today. Well, hardly; driving 3 hours south then west can't be the north west, can it...?
Me and my chief navigator were 2 of several hundred parents who had made the trip to the English Schools Cross Country Championships held this year at Heaton Park in North Manchester. Our young 'un made the squad and was putting in a debut appearance.
It was reassuring to witness hundreds of young lads and lassies ripping up the course in a demonstration of impossible 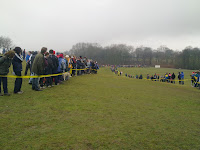 energy, strength and ...what's the word.....athleticism. Clearly none of them had taken a leaf out of my ragged and tatty book of training.

Having never been to Heaton Park before I was impressed at the size of the park and the rolling landscape and will certainly drop in for a run when next in the vicinity on work duty.
On this occasion the rain got the better of everyone and although the course held up well, the tent village was a mud bath. Good for the complexion they tell me (although the complexion of one tent is much the same as another to me..!). 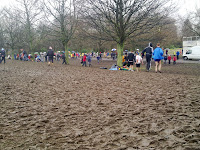 I managed a 30 minute jog around the grass in my fell shoes; its about as much open country as I've experienced this year. Nearly April and I haven't managed up on the moors. Now I know how Heathcliffe felt. A pot of tea and a bowl of chips served by a girl called Heather at the nearby supermarche was as close as I've got. 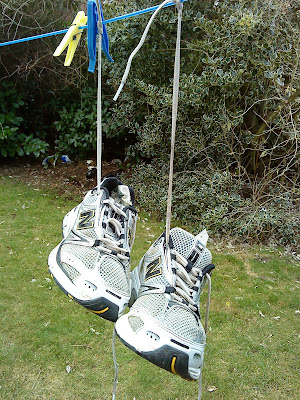 I don't know about you but I hate running first thing. We had a trip booked to Sheffield yesterday, so it was up and out for a run at 7am. After a grumpy 2 miles things brightened up and once into my stride I enjoyed the still sleepy spring sunshine as I tramped round the lanes for an hour.
Today it was a 16 mile cross country extravaganza with the lads with a few peeling off early for Mother's day. Our diminishing band then went 'all rural' and strangely found all the mud and pond life the County had to offer. My new trainers were stretcher cases at 10 miles and a mile from home a few of us diverted through a ford for a shoe wash. The water was b'*#dy freezing but it washed most of the clag off. A good sponging saw the loafers looking much improved...but experience says they'll never smell the same again.
Posted by AMcD at 18:55 No comments: 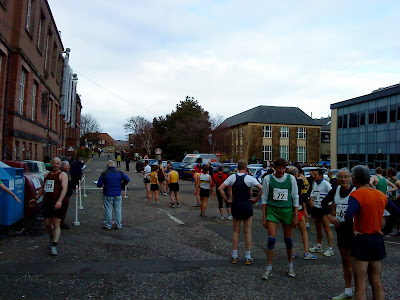 The Edinburgh University KB 5 mile road race starts and finishes at the Kings Buildings Campus on West Mains Road. The course consists of a 5 mile road loop with what the brochure says are 'quite a few hills though none of them steep'...mmm. Not sure I agree with that one.
A loop that takes in Blackford, up and up again past Hermitage golf course, then down, down to Liberton and the last mile back along a slow uphill drag to West Mains.
Driven by Mr G, Dundee Hawkhills most recent recruit (with me supposedly navigating) we arrived with half an hour to spare and we passed over our £5 entry fee.
The field began to gather at the start. Being a University affair it was full of young folk, which was a nice change and after a short talk and the usual initial jostle for space along the pavement, there were a good 30 in front of me as I hit the first mile at 5:58. I couldn't summon the will-power to look at the watch at the 2 mile mark partly as a result of battling up the non-steep hills, but by 3 miles at 17:54 I was 5 seconds behind a Portobello runner who I recognised as the one I tracked last year for several miles at the hill race at Yetholm. Try as I might, I couldn't find the speed to get up close and passing the 4 mile mark at 23:58 I knew there was still a mile of uphill anguish with no other strategy but to dig in. I tried to shorten my stride but it didn't seem to make any difference. Portobello got another 3 or 4 seconds on me at the finish, but I was relieved to have cracked 30 minutes for this course so early in the season, albeit that there was no wind.
Final time 29:40(31st); Scott Fraser (Edinburgh Uni) won in 24:40 (and a new record) from James McMullen and Murray Strain (both HBT). Rosie Smith (HBT) won the women's race in 27:35 from Jenny McLean (Edinburgh AC) and Fiona Thompson (Edinburgh Uni). Results at http://haries.eusu.ed.ac.uk/?q=node/294: Encouraging.
Posted by AMcD at 17:07 No comments: