When the young un’ asked last week what I was doing on Saturday I wasn’t sure whether to say ‘something’ or ‘nothing’...that sort of question can be loaded, and a potential trip hazard unless you’ve years of experience under your belt (like what I have)! The only answer to a question like that is ‘why’?. ,,As it turned out, she had entered the Norman Woodcock Memorial Race but couldn’t run it.
It’s a five mile, three lapper around the race course in Gosforth on the edge of Newcastle. I called the Organiser and changed the details. It’s not one I would do from choice at the moment, given my indifferent form, but I really need to make the effort. However, I had a hard 4 miles in the woods on Friday afternoon and Friday night got the better of me, finding myself in the local hostelry for a couple of hours.


As a result, I muddled around the house this morning feigning DIY and around lunchtime decided to try out the new breadmaker that’s been sat around for a few months.  The basic recipe for a small white loaf takes about 3 hours, so after I stuck in the various component parts, it was grab the shoes and off to the races.
There was around two hundred runners and riders and it was a cold, clear and still day. There were plenty from our club present, it being a championship race and at the start I fell into line as we swung our way anti-clockwise around the inside of the course.  It’s quite flat with a small drag to the finish and I caught up with Peter Grey of Alnwick, early on. Without a watch I had no idea how things were going, other than I was experiencing some discomfort in the ‘body and lung department’ as I clung to the little group as we made our way around the second lap.


My focus began to waver at the beginning of the last lap when I thought about jacking. Thought it, but didn’t. Mentally softening like the bread-dough, my pace dropped a little and Grey began to put some space between him and me.  But there’s nothing like a bit of club support and one of the lads who’d come to watch shouted ‘come on Ally, stop surveying the countryside and get after him’. I didn’t think staring at someone’s soles and the tarmac three metres ahead constituted taking in the view and I grafted onwards.
It was a case of damage limitation in the last stretch as Brannon of North Shields and then a rangy Claremont  and a Newcastle Uni runner came past.  I got to the finish 3 seconds inside the 30 minutes I dared to hope for.  I was done-in though.  I warmed down with the lads and waited for the presentation.  I had finished well down in the field. However, I can’t be disgruntled at all and came away pleased enough that the recent patchy training hasn’t been too detrimental. Maybe time for some new trainers though. The ones I’ve got now feel like flip-flops. The bread was great when I got back. Just needed a bit of chocolate spread on it. 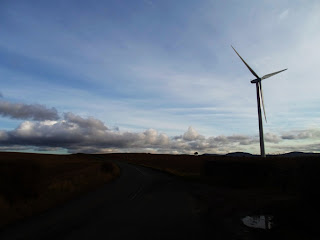 I parked up the car just off the verge on Roger Lane in Maltby village and made my way up the high street to the Village Hall. The two women behind the table were happy to take my £12 entry fee for the Maltby 7 Road Race. The otherwise sleepy hollow located on the boundary between Teesside and North Yorkshire had, by 10:30am, been truly over-run by runners.

I am still spluttering and coughing abit from the vestiges of a squatting cold... I thought they'd brought out some legislation recently that made that sort of thing illegal.  I couldn't face chasing a time at the more local Newcastle 10k. It was a cracking morning (Grommit!) and around 200 runners took off up the lanes after 2 minutes silence, the silence being peppered by frequent garmin and GPS bleeps, peeps, tatties and neeps. After a few words with a lad who knows someone in our club I wished him luck and moved on and began working through the crowd, but being careful to progress in bite size stretches. 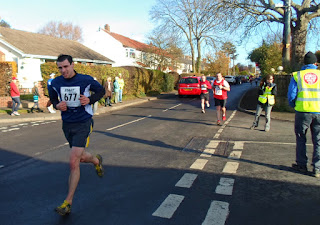 I was soon in with a guy from NYM but he pulled away after 2 miles although he never got too far in front throughout the race. Someone shouted that he had the over 50's prize in the bag. I then caught a South Shields runner as we followed the undulating road close to a clump of faceless, indolent wind turbines turning languidly in the slight breeze. Quite a contrast to my staccato and increasingly, grizzly technique.  There were another 2 or 3 NYM's just ahead but I just couldn't pick it up enough to catch them, and with a mile to go and the arrival of a small but steep hill, South Shields man dumped me from his smooth slipstream and I was left to run along to the end of the high street to grab a glorious 32nd place. 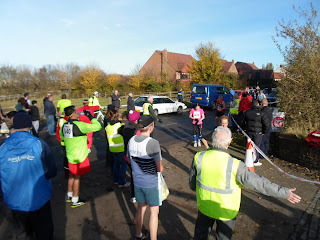 Each finisher got a bag filled with prizes, but on inspection it contained a bottle of water, a plastic bottle and a cream towel. Don't want to carp, but obviously a Granola bar and banana were a bridge too far. 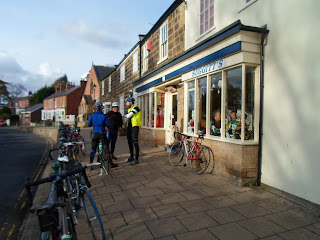 The highlight of the trip came afterwards when after a short warm down, I dug the bike out from the boot, changed into da lyrca and took myself off to Suggitts cafe in my old cycling stomping ground of Great Ayton with £1.50 in my pocket. There were, inevitably a group of bikies ensconced within, but I proffered my coinage and came away with a mug of tea and a scone and jam. Result.
Posted by AMcD at 16:04 No comments: 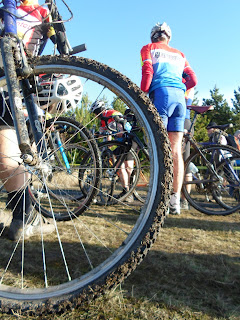 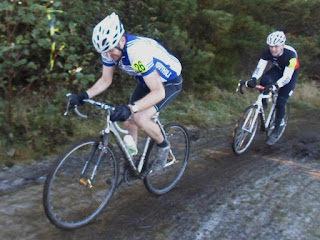 After 35 miles in the dreich rain yesterday, it was a surprise when I woke at nine this morning to a white, hoary frost and crisp blue sky outside.  I fannied around for the morning, drowning in tea and coffee and cleaning the bike from yesterday before heading off to Gallagher Park in Bedlington for the cyclo cross.

Gallagher Park....Whats it named after, I wondered, as I drove down the access road to the car park...Gallagher and Lyle (not sweet enough- or is that Tate and Lyle)?
Noel Gallagher? Nope, this was no 'oasis of pleasure' (sorry!) as I caught sight of the former colliery pit heap, poorly disguised below a sea of green pine trees. 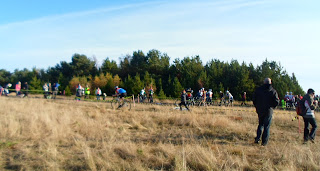 I met up with Stu from Gothic, caught up on the goss. and readied myself for an hours two wheeled mud-gurgling. As Stu pedalled his trusty steed up the hill to the start, his chain broke so there was a quick bit of bike repair to be done. Handled with the usual panache, we all got off at the whistle and were soon threading our way through the course. Most of it was pretty fast but there were a couple of boggy stretches and the organisers had made it quite technical with  a lot of twists with awkward cambers and a couple of narrow corridors through the tightly grouped conifers. One rider in front of me nearly took out the photographer who was leaning out to get the best angle and over the course of an hour there were a good few spills around me as riders took corners too fast, lost tyres on wet tree roots or misjudged their line. I had a good sweat on toward the end and it was a much better ride than 3 weeks earlier at Druridge.

The course was great, but again no running stretches. Maybe I need to go to Belgium, the home of cyclo- cross for this; and then again there's always Gateshead, parts of which can be impossible to ride in wet conditions. 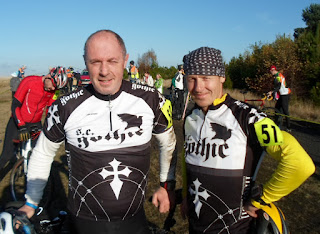 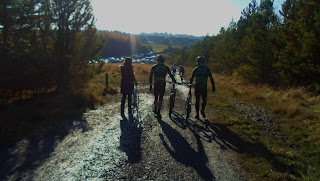 Took the dog out for 40 minutes through the woods later as the sun began to set. Beautiful. A really good Sunday. 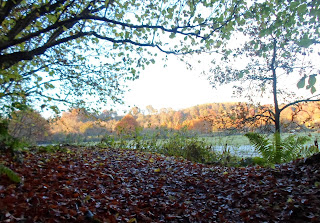 I'm sitting in the lounge with the dog watching ‘Where Eagles Dare’.  I’m watching it, not the dog. She prefers Downton.  Eastwood and Burton.  A classic. Major Bernard Himler, Indeed! With Halloween out of the way I’m surrounded by small bags of sweets, this being due to a meagre attendance on the guising front. Maybe that was because I was hiding in the back room with the lights off. The kids these days just seem to stand there. What does trick or treat really mean? Where’s the poetry. A bit of MacBeth, thats all we want. I remember stumbling round Cumbernauld in a pillow case when I was four. Nothing to do with Halloween; thats just what we did then. Will the sweeties keep till next years Halloween... I think not.
Tonights track session wasn’t quite the snowy highlands of Bavaria but it was the first time I’ve run in freezing temperatures since getting back from the holiday and you could see the sparkling frost on parts of the red tartan.  Nice to run for the first time under the floodlights. It was like being at Maryhill all over again. Well, it would have been, I imagine, had Partick signed me up. 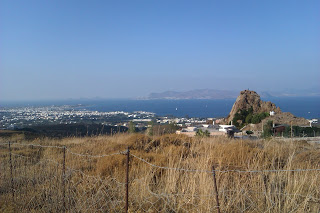 Took the bike abroad last week, which was just as well as it was plenty hot. Too hot to run. It was the end of the season, so there wasn’t hoards of folk around. Not sure why I took Dickens ‘Hard Times’ to read...hardly seaside literature. It was also a bit of a drag coughing and spluttering through each ride having picked up a snotty cold from my generous fellow passengers.  There were some tasty climbs, though, and I wish I had felt better.  But at least I’ve now a small, but select section on the ‘Strava’ website which is in greek.  Always good to bamboozle the competition. Not too hard to get near the top of the league on a greek island where there are only 2 other bikies.
Last night was the first time in a week and a half that I was feeling chipper and plodded round the dimly lit townscape with a bit of bounce (I should really leave those tumble dryer sheets at home).

I keep on seeing my former dentist who seems to have got the running bug bad. Trouble is he looks in good shape and finished just behind me at a 10k in the summer. I may have to invite him up to the house and keep him waiting for 20 minutes in the lounge before asking him to book for an appoinment on another day (as you do). That'll slow him down.

Tonight’s sesh of six times eight hundreds was passable but there’s a long way to go before I’m in any shape.  The home made chips and beer I’ve just had will help, but not in an athletics way.  Good for the soul I think they say. I even had a jam and bread afterwards.  What a rebel. Jabba the hutt. Clearly need to get a couple of target races to aim for and knock me into shape. Meanwhile the cyclo cross season is well underway and there’s a race in Dunbar next weekend so that might be a change. Need to see if theres enough greenbacks for the diesel.

I know how you relish the kitchenalia, so I can tell you that the toasters been binned now. Its been decades since I was perched over the sink with a knife scraping the burnt bit off the side that I left under the grill too long, but it brought back memories. The inconvenience has, however, got the better of nostalgia and It’ll be off to Argos to buy a new one today. The demise of the old one was messy and involved a wet tea-towel. The tea towel didn't make it either.

Clint and Richard have just scrambled off the roof of the cable car now, so have to go.
Posted by AMcD at 08:00 No comments: