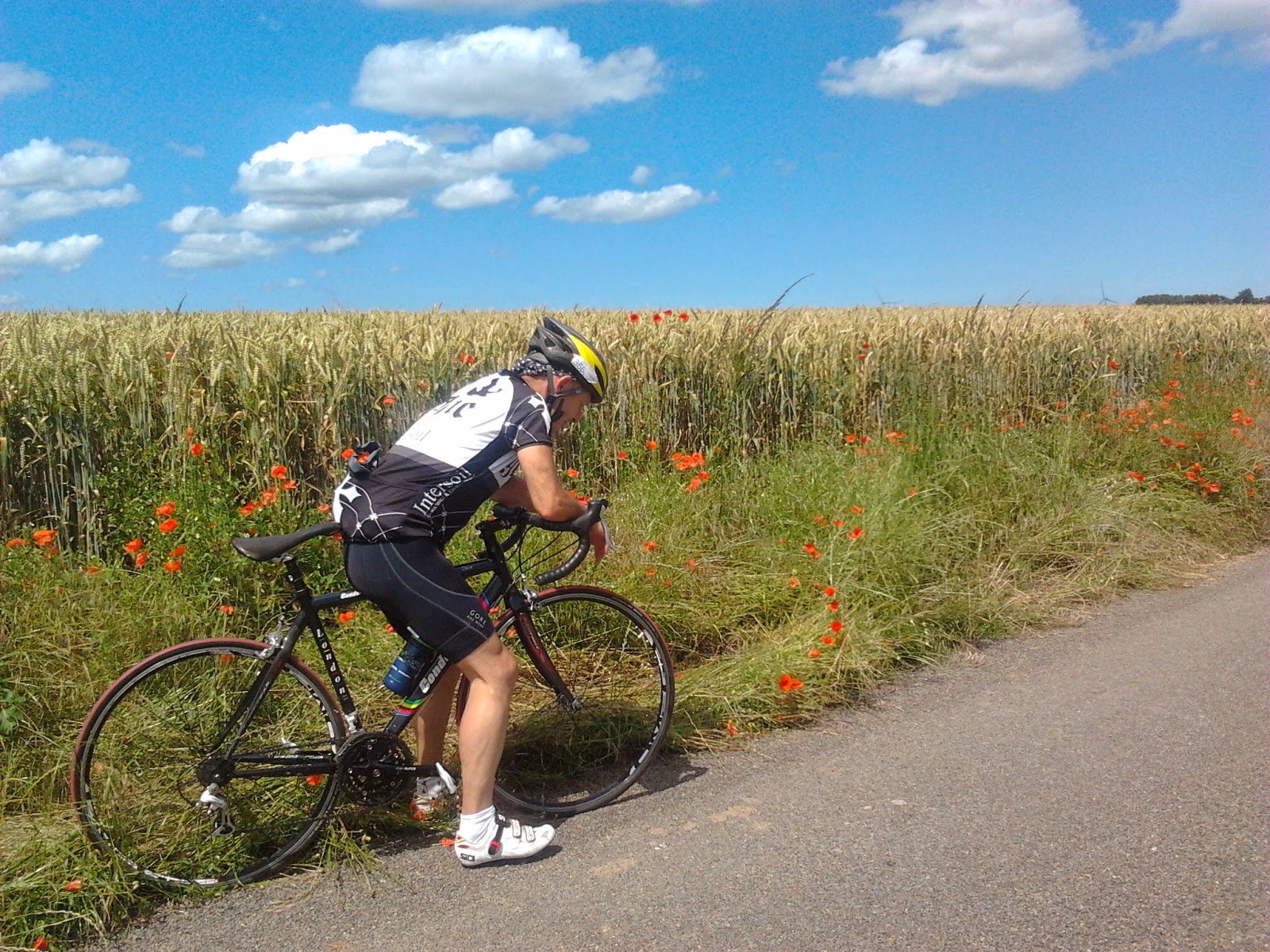 Its been a busy few weeks in the life of me. We had a week in Normandy in great weather. Took the bikes as the injured hip was still on the mend. Running has dropped off the face of the earth at the mo'.
The spiders web of quiet lanes between the villages dotted around the region south of Dieppe made for some great (and generally flat) hour or two hour rides. Young 'un junior has moved into one of my road bikes so that was a bit of company on the roads. She's handy enough in the hills. We'll have to get up to Meadowbank velodrome next month for one of their track tasters.
The gite we were staying in was an old barn and although it had a TV, it wasn't hooked up to the aerial, so we spent an hour around 5pm at random café-tabac's sipping café crème or cidre watching Le Tour. 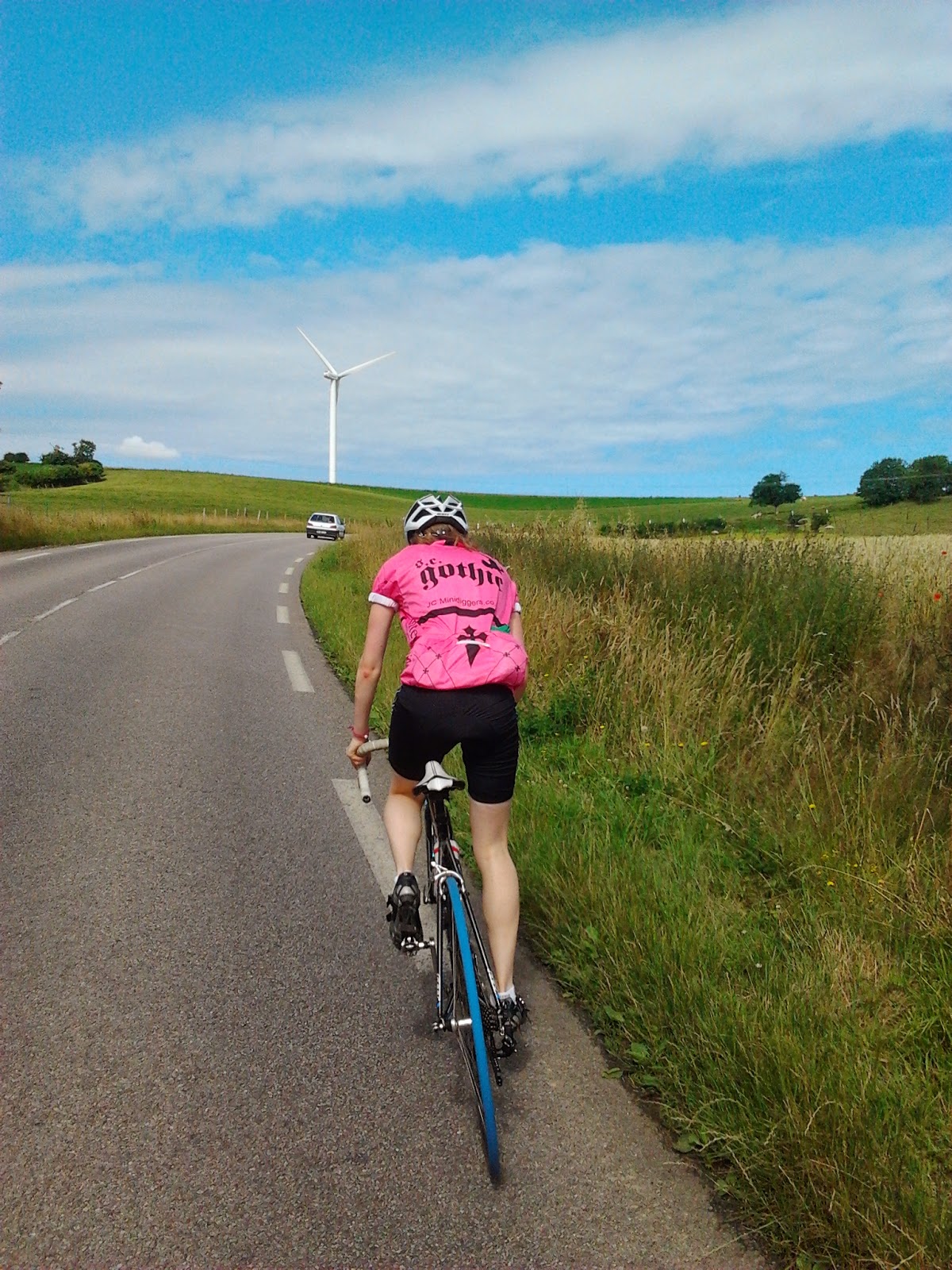 I tried a 6 mile run late in the week, but while the hip was fine, I pulled a calf muscle and hobbled back to base.

Spent a weekend in the Surrey Hills before attending the youngsters graduation which made me a proud dad (again).

Tried again to run last week, but the calf was having none of it after 3 miles and another miserable week of no running awaits me. However, that said, the biking is going well and I'm pretty sure the more I ride, the more my tendons are shortening and so making potential injury in the running stakes more likely. Someone mentioned something called 'stretching'??

The track cycling at the Games has been good and Australia's marathon win was epic.
Its touch and go now how the remainder of this running season is going to go, but life's dynamic and things change so I am pretty relaxed about getting back. It would, however, be good to get a couple of fell runs in before the end of the summer, which has been cracking... And of course there's the duathlon career which has yet to kick off....next years world's are in Adelaide; Maybe a continent too far.  One week at a time I think.

When I first ran the Pitstop 10k in 2004, my running was on an upward trajectory. I was carving modest, frugal slices off my times as a new 40 year old. I recall then, I was hoping for a 38 minute outing at this 3 lapper which takes place at Croft motor racing circuit just in Darlington. It's a little wind swept, but flat...well, flattish.  It attracts around a couple of hundred runners. My abiding memory of that race was watching Martin Scaife, a Teesside runner who had joined Morpeth at that time, floating like a gazelle on his own at the head of the field, across the circuit and on his way to an elegant and unassisted 29.50. Truly inspirational to watch.

Last night, as I started with two hundred others, I wondered how I was going to fare. I was soon in with a crowd of eight or so and as we hit the headwind along the windswept straight, the NYM lad at the front complained that he didn't want to be dragging everyone else along the course. I joined him and after 2km we were clear, but after 3km he had opened up a gap and I was on my own. The second lap was no different and as I came up the long straight for the second time, two came past and off they went. its difficult to maintain concentration in a state of distress, which, for me describes running in the red zone, and the sweat between my fingers and the occasional slapping from my sweaty bingo wings (..too much information by half) were a distraction that I now recall I must do something about. The arms aren't flabby in any way, but I'd best get down the gym.

I had to stem the flow and as entered the final lap, I grappled with the headwind. How was I to motivate myself as the pace continued to drop and another three came past? I imagined myself as Scaife and tried to gather some technique. If nothing else, as I concentrated, it took my mind off the last 2 km and I fell over the line clocking in at 39:20 and 21st. Snaffled 2nd v50. There was no chance of 1st v50. That bloke ran 35 something. Bulman won this one and Rosie Smith 1st Lady and well up in the field.
Still much work to do, but at least the hip injury seems to be no worse. Reasonably priced tea and cake at the end and some generous prizes from up and running made it a worthwhile night.
Posted by AMcD at 10:55 No comments: