Week in the Trossachs 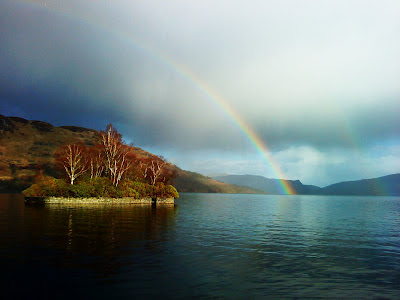 Nice break in Aberfoyle but nice to be back. It was magic on the bike during the middle and end of the week where I collared one of the best circuits I've ever ridden. After a heaving start up the verticality of Dukes Pass where the road rises 220m over 4km (I don't know why it doesn't feature in the 100 great British climbs book), it's left at Achray to Loch Katrine and giving it plenty along the northern edge on a single track road with virtually no traffic for 12 miles before steering south past Stronachlachler Pier and returning on the back road to Aberfoyle past Kinlochard. They've resurfaced some of it which is super -fast, but there are enough potholes here and there elsewhere to keep you focused. Thirty miles or so.

Only managed a couple of short runs but a little more than 100 miles total on the bike made it a week to remember. Loads of bikies. Even a few shafts of sunlight and the occasional rainbow. Thought about stopping late for the Nigel Barge 10k, but too many big dinners have left me a bit Billy Buntered... 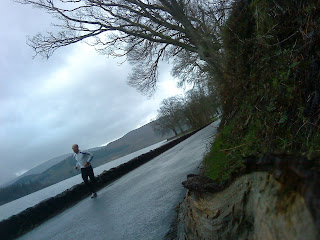 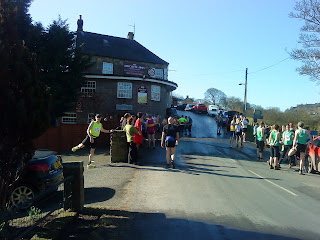 Its hard to imagine such a contrast in the weather from last weeks Captain Cook Challenge to today's Glaisdale Fell Race. There was a biggish turnout for this 8 miler. Its a medium length, medium steepness classified race. I wasn't expecting to go into the red zone during it and set off with about 100 others down the road from the village. The route then climbs steadily up onto the top of the North York Moors. 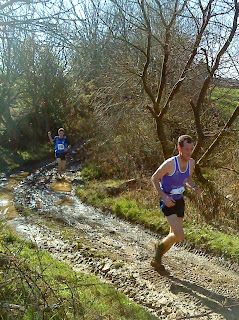 I should have replaced the bumbag with the camera as it was glorious up on t'moors. Heathcliff and the Baskervilles were well tucked up and it was only the odd grouse that made its presence known as we made our way across the wide metalled track with neat short grass along the edges crimped by rabbits and the occassional dimple from a horsehoe. There was little wind and it was warm.

It took a good while to get going but I soon found myself chasing a Bingley, Loftus and a 3rd runner who were 'sort of' together. I eventually caught them and took on a gell which seemed like a good idea. We ran along a farm and then up through a dry river channel within a dark conifer wood. It was stunning, running on a carpet of needles and enveloped in trees above with rods of bright sunlight breaking through the gaps between trees and branches. It was uphill though and the only tough bit I think in the race and I struggled to stay with the two, Bingley runner having dropped back a little. 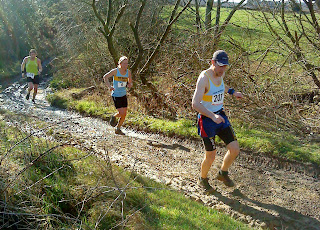 I had a sweat on which was nice considering it's March. The course then followed a moorland track along the top to Snowdon Nab. There was a little plantation of grey tree stumps all stripped of bark and regimented in short rows. It looked like a small graveyard of stumps and was surrounded by green moss. 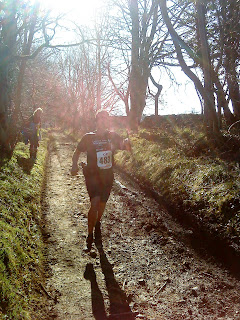 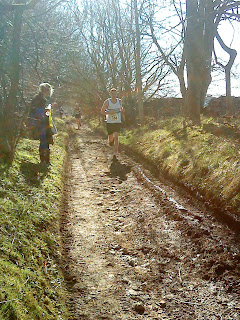 Loftus man had dropped back a little but neither him nor Bingley man were too far behind. Unattached runner let me past at a stile saying he wasn't sure of the way. It occured to me, as a I ploughed on through the reedy grass and heather toward the finish, that I didn't know the way either but as the course dropped steeply I felt I was almost there. I worked steadily down the long track to the ford at the bottom of the valley and asked some folk there where the finish was. They advised it was back the way I'd come and I'd missed the tape marker where runners evidently were supposed to cut left. As I ran back the 60 or 70 yards up the hill I saw all 3 lads cutting across the little footbridge and having lost 3 places I felt a bit grumpy, walking the wee last bit up the hill. I spent the next 20 minutes marshalling at the junction where I'd gone wrong to try and make me feel better. And I did. After all, thats fell racing!


So...cracking day for a run and I live to fight another day. I'll sure be back next year, this time with 'The Knowledge'.  I hope the weather will be the same.
Posted by AMcD at 20:08 No comments: 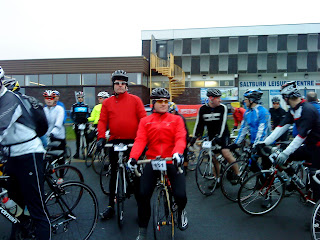 Reality was out of the room when I entered the 94 mile Captain Cook Challenge ‘Mega-ride’ Sportive. When it returned, however,  it gave me a full-on dressing down and, this morning, as I arrived at Saltburn for a 9am start, it was the shorter, more modest  60 mile ‘Midi’ event in the North York Moors that I signed on for.  I'd also seen the forecast.
The good Captain made his name around Australia and New Zealand. He might have discovered Hawaii (although the Hawaiiians had discovered it a wee while before him).  What made him travel to these warm distant shores?  And just what were his bike handling skills like? ....After 4 hours riding in conditions which I can’t begin to describe....Ok, I’ll try.  Shocking. Awful. There, I’ve described them now...I think I can imagine his thought process. 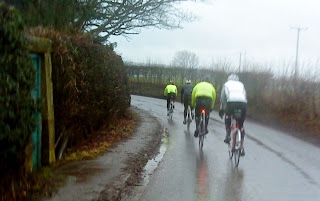 Around 100 of us set off at 9.30am in light rain and grey, heavy skies for a cycle sportive around the moors. It was my first of these organised road events. It’s not a race, but you get a number and you're expected not to stop off at every tea shop or photo-opportunity along the way. There are also some pretty handy cyclists in the vicinity.  I started talking to a bloke from Leeds as we led around 8 others up through the flatlands of Guisborough, Great Ayton and Kildale before things split on the first of the steep climbs. Predictably, near the top,  I stopped to take a few photos. You don’t lose much time when you run and snap. On a bike, however, with a pair of sopping wet gloves and numb fingers things can get pretty messy. In cold weather it’s the feet and hands that get cold and after 20 miles I was soaked. I should say with my new SC Gothic jersey on, I felt bullish and rode on with panache. Wet panache. 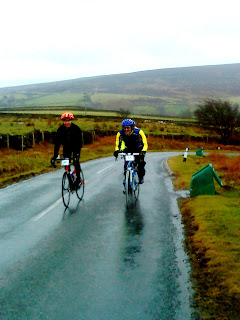 As we climbed out of Commondale and headed east to Danby then south to Fryup it was getting a tad chilly. The thermometer had dropped to nothing degrees and at the turn (30 miles) the clag was down and the rain had turned to snow.
Riders came and went along the ride. I was pleased to stop at the checkpoint at Castleton village hall at 34 miles.  Riders jostled for radiator space. Some clearly had given up and wandered across the boards with empty eyes wringing their gear out. When, after 10 minutes, they wheeled the tea out the mood lifted and it went some way to stopping the bouts of uncontrollable shivering witnessed around parts of the hall. I spent around 20 minutes mooching around the place, hopping from radiator to radiator and being my jovial self said to one rider ‘ Well, it’ll mostly be downhill now and it can’t get any worse’.

As we climbed into a slight northerly headwind out of Castleton and down into Kildale the icy snow and sleet intensified and made it very difficult to see. My high vis. glasses were steaming up on the inside and icing up on the outside. I couldn’t feel my feet.  My fingers weren’t working. This was a bit worrying and managing to work the brakes became a luxury.  I was surprised I was still pedaling. My bike was looking up at me with pleading eyes. Any thought of taking photos was a joke and I began singing to myself as I felt the cold numbness creeping up my shins.  Artic. 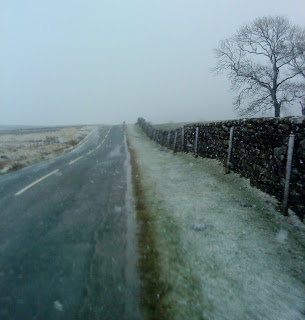 The sleet was gathering on all the gear and with 10 miles to go it was just a case of trying to keep warm. I think ‘fatigue’ was in the equation as well but it sensibly kept its head down and mouth shut. Bodies on bikes were few and far between and the cars roared past once we hit the outskirts of Teesside kindly spraying riders with slush.

I finished in 4 hrs and some seconds and won’t bore you with the burning pain endured as my senses crept back after a hot shower and litres of tea. The cake was good though. I did the Hexham Hobble Fell race in 2005 and Ben Nevis in 2009, both in atrocious conditions. I can now add this event to the short and lugubrious list. 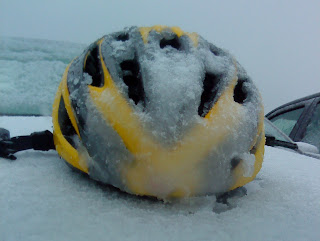 Captain Cook Challenge?....Change the’ Cook’ to ‘Scott’ and you might be nearer the mark.  Well done to the organisers and especially the motor bike outrider. Hero.
Posted by AMcD at 19:01 2 comments: