I arranged to see Cassie again tonight. I dressed up for the occasion.
Two pairs of gloves and three layers. Far too much clothing for a mild night. I think my wife has an inkling that something is going on. She has asked to be introduced.

Its hard to get away from all the Christmas lights. I actually quite like the bright, sparkly lights, especially the traditional old school coloured ones that adorn every other house. They remind me of dark grey winter nights in Glasgow in the 70's.  The choice was much more limited then and their appearance heralded the holidays and the arrival of Santa.

This year, our house received more than its quota of head torches. It was on my list, but they arrived from all angles on Christmas day morning. So it was with no regret whatsoever that I jettisoned the one I bought in a budget store two years ago. It was cheap, it was loose and it slept around. It made me dizzy on the only occasion I ran with it.

Tonight, as I left the house in the dark for a night run down the Wannie line, a stretch of disused railway line that originally ran from Morpeth via Scots Gap to Reedsmouth and on to the Borders, I wore a new 'torch de cranium'.  It goes by the name of a Petzl Tikka. I had my cap on underneath it and as I ran into the  dark still night, the edge of the visor cast a shadow forming a black rim just below my eyeline. It told my brain I was wearing glasses. I wasn't. Even as clouds of steamy vapour issued from the breathing department, I wanted to wipe the non-existent lenses.

As I cut through the Common beside the local football club ground I thought there was every chance of a few players stopping me to ask if I'd be the fifth floodlight. Those cheeky little lumens dancing all around. I dropped onto the road and then off again into High House Woods and set about working around the 2 mile circuit a couple of times. It was slow but entertaining.

It was during the second circuit that I looked up. The sky had cleared and the stars were out and there she was, Cassieopea. I stopped and turned the torch off for a bit and took in the heavens. Astronomy was not on my list of subjects when I was young. Other than 'the plough', I didn't really take much notice. I bought a book of stars in the local Oxfam shop last year. It's sat on the shelf for months. This month, however, curiosity has got the better of me. Turns out 'the plough' goes by a few other names as well (you'll just have to 'wiki it' like I did).

Considering how much time I spend outside, the night sky remains a mystery.  We should be on first name terms. So, one of next years targets is to get to know some of Cassie's mates a bit better. I might even get a bit familiar with some of them. I should get myself along to Kielder with a telescope. Probably take the bike as well... and maybe my head torch.. perhaps a picnic and a nice bottle of ginger beer.....

Just over seven miles tonight and thirteen yesterday. Modest, but the new addition to the larder of a bottle of Castor oil, will, I hope, make the joints run that bit smoother. I've been pleased with how things have gone this year on the sporting front and with the cycling club picking up momentum, I hope the next 12 months will be eventful in all the right ways....

Next time, read about Orion's Belt and the blue supergiant.

I found myself running through Granton the other night. The moon was high and bobulous like the red bobbles on the tree. The rush hour was in full swing. Rather than get stuck in traffic jams, I dumped the car in a posh street and headed out for 3 miles along past Leith before turning at McDonalds. No, I wasn’t tempted, thank you very much.
It was entertaining to have a sneaky peer in the windows of the nice houses down from Trinity Road before the streetscape gave way to a more commercial  and dayglow vista. There were a couple of pubs that looked welcoming (the Starbank being one of them) and there were a couple of fancy restaurants along the way. I spent a little while dodging folk as they busied themselves getting on and off buses or standing peering in shop windows...always the cheapest way to shop!
Once the festive windows ran out, I made do with snippets of the conversation of passing folk. I told myself I’d remember a few of them, but only the one from the two young men in trenchcoats and beanies stuck...’ but then its economics;  so I lost interest’.  Not an economist then, I mused.
I passed a female runner in pink top and backpack on the other side of the road as I came back through the exotically named Salamander Street. The wind was picking up then, so I was happy to finish and can report that my car was very definitely the dirtiest one in the street. 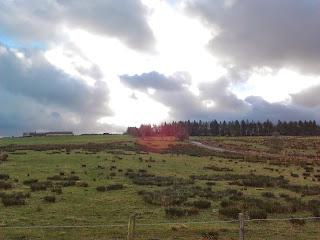 The busy week has seen me trying to shoe horn in any exercise I can snaffle wherever I am. This culminated on Monday in 20 miles over Plenmeller Hill just past Haltwhistle with over 2000ft of climbing. I was pretty much alone on the road and really enjoyed the workout, especially for the upper body...struggling up the long steep gradients with the odd sparrowhawk for company.  Cold, wild desolate moorland. I don’t know why they didn’t put the climbs around Alston and Haltwhistle in the '100 greatest cycling hill climbs' book, but evidently there are several monster climbs in the area, and I will be frequenting these with alacrity especially as I have work in the area that’ll mean a few return visits. 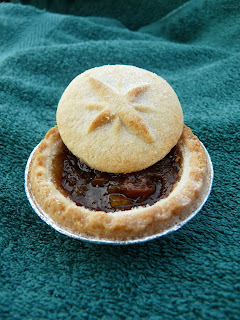 Meanwhile while the mileage is suffering, I’m weighing in like a elephant seal whose had too many jaffa cakes, so the purge must go on. It’s the Christmas cyclo cross tomorrow at South Shields and the Morpeth 11k on New Years Day, so a chance to burn off a few of these mince pies I’m wearing. All the best.

It's been a very lazy week with the bare minimum of mileage and a weekend that would shame a sloth. I had raced twice the weekend before and not wanting to push my luck or break my gnarled body, I spent most of the week without the garmin. It's easy to become obsessed with a bit of kit or, for that matter, with a website like Strava.  I tried to wean myself off both, at least for a while.

We took off for a long weekend spending Friday in Glasgow and the remainder in  Inveraray. Went for an hours run up to the watchtower before a foamy bath and slap up feed. Sunday was a walk along Glen Kinglas before a stop for soup at the Village Inn, Arrochar. 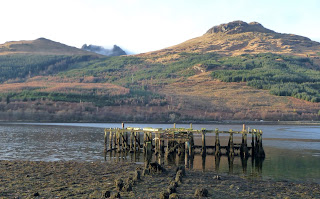 The garmin free holiday finished last night with a workmanlike 8 miles with the crowd knocking out one and two minute intervals. Felt good at the end and reckon the easy week has had the desired effect. The garmin had made a re-appearance.

Need to decide what's next on the sporting calendar. Anything to keep away from Winterfest! bah, humbug.