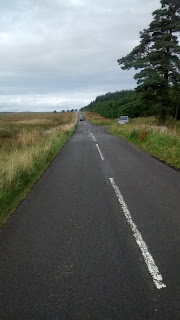 I dropped Mrs M. off yesterday morning, well before the start of the great north run. As I drove back in the low cloud I thought about watching the run on the BBC. However, I soon recalled the past coverage of the London marathon and some world triathlon championships. Lamentable. Its either exhaustive coverage on the 3 elites in the front, panning across a handful of fun runners at the back or they're busy interviewing their own so-called personalities. What's the point? Never seems to be any thought about leaving a camera rolling for a minute or two as the club runners come past.

So, after a half a grapefruit and a slice of toast I was off cycling, having missed the crowd down at the running club. The weather was improving and I was set on a couple of climbs. The Gibbet at Elsdon is apparently No.61 in the top 100 of UK hills to ride up. Not sure how they've ranked these, but I've got the handbook upstairs. I've been toying with the idea of entering a few (bike) hill climb competitions, but quite frankly these events are not good for your heart and when I think of the possibility of grabbing glory and skipping lightly onto the podium (an age group related podium, obviously), I bleach at the thought that swings into my head of getting carried off, instead, in the back of an anonymous ambulance. What's more, I suspect the ambulance wouldn't arrive on time. I could be on the pavement for a good while....Better to stick to the riding for pleasure for now.

I caught up with a couple of lads for a few miles then tailed off right to Elsdon. It had turned out to be so nice, I carried on over Bilsmoor and then turned and came back up the other side of the hill and then stopped at the Elsdon impromptu cafe for a cuppa and slice of apple pie. That's two weekends in a row now and I have sat there chin wagging for 40 minutes or so on each occasion. Good therapy, especially when the September sun's giving it full-on overhead as you sit in the front garden watching the sparrows pecking on the dangling fat balls.

Last night I sat looking at the entry form on the screen for the Dumfries half. However, still no further forward on the fitness front, so, on reflection, more training required. My form can't justify the trip. I need to up my game from the current 30 miles a week. I think a trail race would probably fit the bill at the mo. But then , I wonder if they would have first aid facilities......maybe stick to blogging; safer (at least, in my head)!