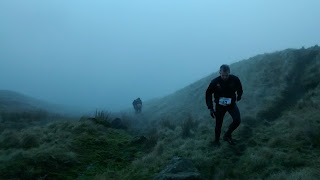 I knew it was cold yesterday morning as I scraped the frost off the inside of the car windscreen. It was six in the morning and foggy as I encouraged the car up the A1. Stopping at Dunfermline for a banana and a latte, the clag was down and it was decidedly foggy in places.
As I made my way to historic Falkland with its palace and twisty, winding narrow streets the village was still slumbering. The village hall was bulging with runners and an air of anticipation pervaded the scene.  I got lucky parking the car but there was hardly any space to park on the streets. 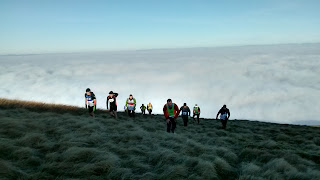 I ran the Devil Burdens Relays, a 30k hill running challenge for teams of 6 back in 2011, when I teamed up with Steve Mason. This year I was in the v50 team running the 3rd leg, 6 miles with 1800ft of ascent. As we gathered in the hall, I was advised that things had changed and that I was running the 2nd leg in a ‘faster’ team. 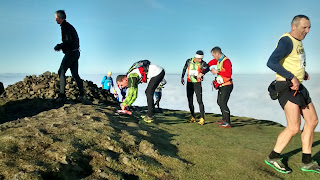 I pinned my number on my vest and checked my bumbag as the organiser from Fife AC called out the rules, the do’s and don’ts for the race. I found myself running leg 2 (another 6 miler) over Devils Burden and West Lomond with Mr G. Who I didn’t know. After asking around we met and I managed to get a lift to Strathkinness. I sat in the car looking at the map and the 7 checkpoints we needed to find. 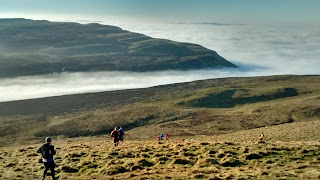 We were dropped off and watched the early runners coming in from leg 1. We were soon off and passed a few teams through the woods before we hit the hillside. We tacked up the hill in the fog, as several teams came together looking for the 3rd checkpoint. It was shown to be located just east of the crags and it took a few of the teams to comb the area before we found it in the greyness and poor light.

It was upwards to West Lomond then and we slowly emerged out of the thick swirling mist to a clear blue sky and superb scenery. We managed a wee conversation on the way to Strathmiglo once the climb was over. Somewhere before the last checkpoint I found a knee deep pool of mud that stopped me in my tracks but I was never in the red and we finished at the base of a steep descent with around 70 minutes of running. We searched for the car through the village. I began to get cold as my damp sweaty gear cooled, but soon enough  it was back to Falkland before I changed on the car and left to take the long trip south.   It’s a good early season event and a good day out with lots of nice fotos. 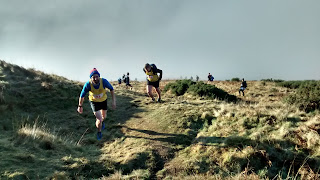 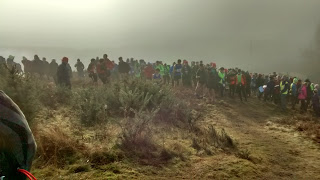 Yes, thank you for asking; I had a lovely Christmas and, well, I suppose a ‘measured’ new year. You might be thinking that the latter is a veiled reference to measures of alcohol, but, no; the usual attempts at holiday discipline were exercised and I emerged from the obscene consumer driven mire not completely unscathed, but at least missing no limbs.


I read that 2016 was a shoddy year and most folk are keen to put it behind them. Will 2017 be that much better? Well, I’ve just this minute received an email advising me I have been selected for a £350,000 prize, so things are looking up I must say. 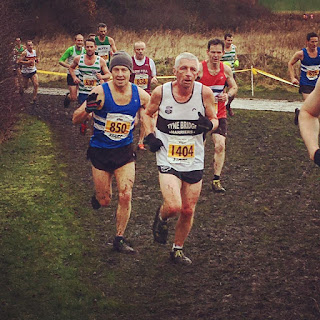 Among the holiday purchases was an old leather chair and cushion. It’s a bit battered but I’ve been on the lookout for one, at the right price, for years.  Now as I sit here in my cast-me-up dressing gown by the hearth, I must say I can see myself morphing in Rowley Birkin, Paul Whitehouses inebriated character from the fast show.  I think I resemble David Stott from Vic Reeves big night out.


Talking of fast shows, yesterday’s Cross Country mud fest at Herrington Park near Sunderland was a hard day out for an old duffer, and running in unseasonably mild temperatures with only shorts, vest and hat for effect (although I have no idea what impression I was trying to affect),  I overdid it. Even with the benefit of a slow pack start, I crept up to 58th place after lap 2, before capitulating in the strength sapping Wearside slop to come in at 101st  from a field of around 550. The last time 50 or so runners got past me was the super-lubricated claggy descent during the 2009 Ben race. Yesterday, I may as well have replaced my 10mm spikes with raisins, or donned a set of clean brushed cotton floral pi-jim-jams and a pair of travel ballerina slippers for the number of mud-watts of power I successfully generated. The only saving grace was a star performance by the young ‘un who won the womens race and the fact that I didn’t have to queue to get out of the park, having undertaken a covert reconnaissance of exit points and available spaces near the gates during a short and unconvincing warm up, before moving the car to the optimum spot.  I didn't need a warm down!


Getting back to the house, I scrubbed the xc shoes and took a scraper to my legs, before having a pre-bath shower, then managing to fall asleep in the bath itself.  My heart rate was still abit up on the usual this morning, so today will be two short runs rather than the longer Sunday run.  But its leftover steak for lunch and something about chips and peas is in the ether.


The current read, Steinbecks Cannery Row is not a thick affair, but coming on the back of Le Carre’s the night manager, I may need something lighter.  I asked Aunt Aggie last night for a recommendation, but she was rather down-beat as she sat among the box of Christmas bobbles and tinsel that are destined for the loft for another year. When I asked why so sad, she felt compelled to admit that she had put a teaspoon in the knife compartment of the cutlery drawer on purpose and was subsequently wracked with guilt.  Her new year resolution is to improve upon her cheese making skills, but we're going to have a sit-down serious chat soon about where she stores the curd and some of the more exotic smells that are coming from behind the kitchen radiator.
Posted by AMcD at 11:52 No comments: