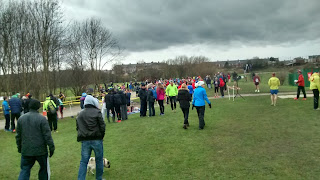 I woke up this morning with a thick throat. Not a good sign. I had a lemsip. I then put the tele on in bed while I had my grapefruit and toast. Well, the tele wasn't in the bed, you understand, but I was.
I got caught up in a 'House of Cards' re-run from the 1980's. Francis Urquart. Compelling. You might say that; I couldn't possibly comment. They then put another episode on, and then another, all back to back. I had some porridge. Before I knew it, though, it was time to get out the door for the Royal Signals North East Road Relay Championships. 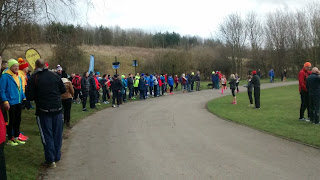 I got to Hetton Lyons in good time. I eventually found the gang and was advised I was running 3rd of the 4 legs in the men's over 50 geriatric race. I usually run the 4th leg. By that time, I reckon the hard work has generally been done.  The over 50's men and over 60's men's race are combined with the women's race so the crowd is healthy and pretty vocal. The Signals is a whose-who of the North East and Teesside running club scene.

I decided to keep my 'hell of a nice' OMM tights on, and coupled the look with neck tube/neck warmer (or whatever they're called now) and, of course, odd gloves. Zoolander. The hat was still on. The supporters at the edge of the 1.1 mile park circuit in Durham decided that I was simply attention seeking.  Blue Steel. When someones dad asked if I was fit, I actually said yes. Its the truth. Apart that is for the scratchy throat.

Rob H got our first leg off and looked to be working hard over the 2.2 miles (twice around the park) landing around 5th. However, our second-legger, PaulB, had that 'far away look' and clearly his thoughts were elsewhere as Rob landed. He only 'came to' several seconds after Rob, breathless on one side, and me on the other, stood shouting at him to go, he eventually getting the 100 decibel stereo-phonically delivered prompt. 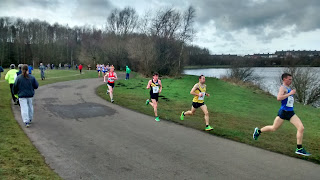 PaulB worked his way round the two laps and I was next I took off not knowing quite where I was in our race, but with the objective to get around the course as fast as I could without going into the red. Its true as you come around the top of the course at the end of the first lap, you up your game and re-engage the running technique for the punters as they shout encouragement. Trying to look polished and in control isn't easy when your gasping like some old wraith with tunnel vision from oxygen deprivation. Thankfully, I never go off quick enough which meant that I had a bit in hand, and by the second lap, was not too far off Tyne Bridge's 4th placed runner. He was at Carnethy last week, and while I put time into the team, I couldn't quite catch him at the end as I handed over to PaulW. He claimed to be suffering another cold, but he still put in a solid shift (to land us in bronze position as it turned out).

I did another few laps to get my mileage up was chuffed to hear we'd managed 3rd, having assumed we'd been stuck with 4th. 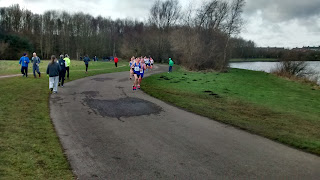 Next on the running schedule is the exotic and flat as a witches trafford 10k in March. If I am going to thrash myself in a 10k this year, I want to know I have a chance with a flat course. If I can deliver a sub 39 minuter I'll be pleased.

In the meantime, I need to buckle down and keep the progress going.  Missus Mac is off Choc for lent, but I've had a big night out (more than a babycham and 2 pints of pale ale) so I've come in and savaged the box of maltesers hiding under the cooker. No self discipline; Thats me. Pathetic. I only did that cause there was no lemsips, you understand! 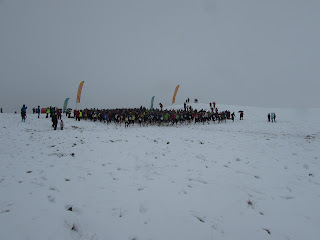 The forecast was for snow showers yesterday, but driving up to the Pentlands yesterday, my sixth sense told me otherwise. Maybe the mattress of soft, thick snowflakes streaming across the windscreen at Grantshouse was a hint. I picked up our kid at Eskbank at noon. She moseyed over to watch the February running spectacular that is the Carnethy Five hill race. Its one of the biggest, juiciest fields in fell racing, early doors, and the 600 who got through in the ballot, me being one, had come from all quarters. I heard Irish voices and later ran for most of the race with a lass wearing a Goteborg top. I wondered if she had run the strommingsloppet or kistaloppet. Lets not talk about the Lundaloppet.  We drove past the start, already peppered by marshalls and the odd runner all looking cold in the white conditions as the snow pregnant sky threatened more. 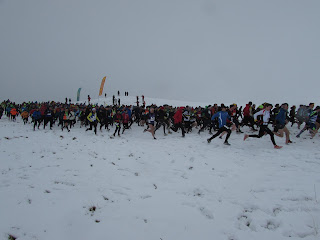 At Beeslack school, race HQ, there was a big crowd, and soon it was off in the fleet of buses to take the 2 mile trip to the start. As the buses left and began heading up to the hills, the sleet in Penecuik turned to snow and as we disembarked and made our way to the start on the moor it just kept coming.
I've done the Carnethy once before in 2008, when it was sponsored by Tiso and before global warming was invented. I was in the ascent then, but I recalled leaving the event with a feeling of...well, mild contempt, I suppose; that I'd been ambushed by something and hadn't been sufficiently prepared. However, I couldn't put my finger on what the problem had been.  It was certainly tougher than I'd expected. 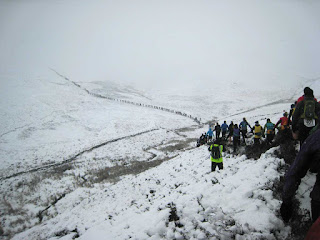 This time around, I knew I was not carrying any extra weight and had been out during the week to buy some new tights having anticipated that the 'Ron Hills' would sag badly in the wet and nobody wanted to see my builders crack wearing the old 'New Balance' ones that don't go high enough up my waistline. My pricey ''OMM' ones were the biz.

The race kicked off 15 minutes late, and the organiser advised there were around 100 marshalls on the hill. Looks like we got ourselves a posse. I paid badly for my slow start, fannying around with my garmin and eventually slipping into a line of runners as the snow continued. As we climbed the first big long hill, Scald Law, I knew it would be tough trying to get past folk and every so often there was a little surge from runners behind as they and me passed a few on the outside, then tucked back in where the thickening snow had been trampled to something resembling the route. I could have been going anywhere and with around 50 metres of visibility, the constant ups and down and false summits would have allowed for some great photos, had I had my camera. but today, I was racing, so it was onwards. 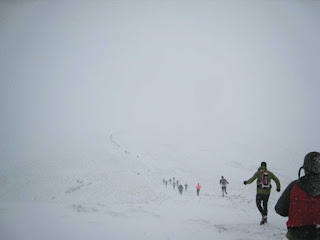 I had three layers on and a scarf and hat and halfway through congratulated myself on getting the attire right. It was sheltered and snowy in the hollows, but blowy and snowy on the tops and I reckoned I was around 150th or thereabouts. I gave it some welly on the downhills and the cambers along the narrow track off 'the Kips' on  polished snow was very tricky in places. I gave myself a mental workover to get up and over to get up the last climb, when Goteborg girl got past me again, but over the top she slowed and I galloped down over the snow and exposed heather, only to be passed by a girl from shettleston who lopped down the hill with the spring of a gazelle.  A runner from Irvine came past on the way down, but the hellish camber on the heather as we headed off the hill was tortuous and he went down like a sack of tatties. 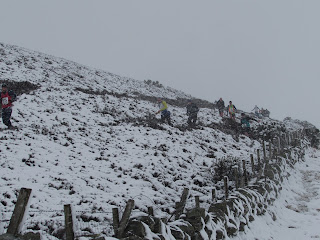 I caught two on the run-in at the end and was thankful for the scouts coffee tent where we grabbed a drink and headed off, picking up dinner later at the Steading.  Great to run in character building conditions like that. The organisation was excellent and the marshalls huddled around the routee, hiding behind walls or just stood erect in anonymous waterproofs with snow plastered to one side of their torsos were the real heroes. Even though my time was 1;12 compared to 1;05 in 2008, I left knowing that I'd had a better run and had been ready for all the sharp climbs the race had to offer. The snow was a bonus. (Some fotos courtesy of the Carnethy website).
A truly memorable day on the hill.  Some great shots of the leaders at https://www.flickr.com/photos/cammyscott/sets/72157664057467720 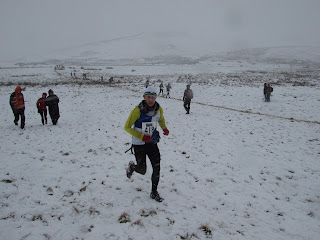