Out of the Pits

It was touch and go this morning but I'm not the patient type so packed my bag and legged it to Gateshead for today's round of the North East Cross Country series. Wrekenton is a cross country on a former pit heap so the ground is gravelly and not bad at all. The remnants of the pit heap forms the main focal point and competitors run up and down three times and around some wet fields, but, all in all, it's not too testing as XC goes.

Started very easily and took it easy on the first lap, then began motoring on the second working my way up to 30th-ish. Had to jettison my hat as the sun came out halfway through. By the third and final lap I'd used up my meagre reserves and hung on unconvincingly for 50ish something as some of the fast lads started to come through. Numbed by a couple of brufen, the calf and knee were fine. Tonight, the knee aches abit but a good nights kip might do the trick and hopefully it'll cope with tomorrows 15 miler. May have to have a wee snifter to make sure it sleeps soundly! Medicinal, you know.
Posted by AMcD at 19:14 No comments: 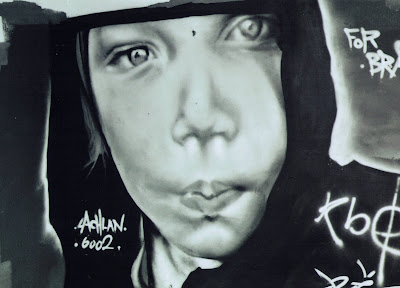 I was down in Leeds yesterday and wasn't far from an old mill over the canal off Moss Road that's now been demolished...with it went these images. I took a few b&w snaps ages ago. Some amazing work by a grafitti artist or art student. Always meant to return to get some colour photos.
Meanwhile, the spirit's eager but the flesh is weak. ..and its getting more decrepit every day that this shiftless spring stagnation continues (see what I did there with that alliteration - only excitement I get at the moment). I have a 20 miler in 2 weeks time but had to dip out of the session on Monday, hobbling halfway back to the club before I remembered I'd ran down from home, so, as with every good politician, I had to contemplate a u-turn.
I've got 4 pounds to shift before then and a whole lot of lost mileage to catch up on, but someone's sabotaged my left leg. Its all very subtle. Knee pain that disappears when I stop running and which also responds to brufen and a lower calf thats tighter than me on a night out but not so far down as to be an achilles thing. I'm off to see the physio on Monday. I daren't touch the bike in case its something to do with the cycling.
Meanwhile Aunt Aggie, mumbling away all the while, contents herself by sitting in the corner over the embers with a wee woolly doll, a secret smile and a handful of pins.
Posted by AMcD at 08:27 No comments: 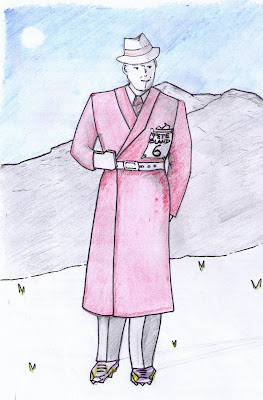 I frequently watch TV nestled in an atmosphere of apathy. Sometimes this spills into mild psychosis if I'm really bored or the programme turgid. When I think about it, there's not been many times when I've stood in the middle of the lounge with my cowbells clanking, shouting at the glass screen (at least not since I stopped getting Eurosport).
Adverts are treated with disdain. I casually comment on the nonsense they often pedal to get their message across. Aunt Aggie now believes there are indeed five phases of fartlek, four signs of fatigue, seven symptoms of ageing, that meercats can talk and that every shampoo has a secret or unique ingredient.
Languishing around with a heavy cold for the last week I've watched too much telly so when I ventured out and managed 5 miles last night, the cabin fever began to fall away. Team orders were promptly issued to enter the 'Trimpell 20' race. The fastest 20m race in the country apparently, but that assumes you're fit and can run fast. It's sponsored by Pete Bland, so I might be able to cash in my 2009 vouchers if he's got a stand there. I did enjoy my last 20 miler, the Edinburgh to North Berwick last year. Well. enjoyed it up to the 15 mile point when I became dehydrated and fell off the back of the group I was in. I've since got a marathon under my belt so I'm a bit wiser in terms of endurance.
The legs seem fine now but everything's a bit weedy from inactivity. As I lift my head to cough and splutter and swill the yellow remnants of my 'cold remedy drink' in my mug, I catch the shadow of the April marathon behemoth heaving itself over the far horizon and it occurs to me that I better get my 's#*t wired' (as they said last night in Starship Troopers 3) and get some miles in toute suite.
Posted by AMcD at 09:00 No comments:

I was pretty baffled by my knee pain resulting in a premature exit from Saturdays Northern XC competition. Fair enough I had suffered a bout of cramp at Simonside a fortnight earlier and then from a strained calf toward the end of run at the Devils Burdens run last weekend, but the calf had recovered quite well over the following week, so this knee thing was a mystery.
I've only been a DNF statistic once before in the 7 years I've been running competitively. I had been out on the bike the day before for 20 miles, but it was a slow easy ride so no cause there, surely. 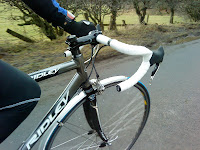 Rather than doing my usual long Sunday run I went out on the bike for another quiet steady ride. Those lads at Breeze Bikes had got the machine working a treat and I was still going nicely along the damp, leaf strewn lanes after an hour. There were plenty of bikies out. I got back to the house with 30 miles in the bank and sponged the machine down with warm soapy water. Later in the afternoon the knee pain was still there and I suppose the giveaway was that it had spread from my left knee to my right knee as well.
On Monday it was looking like I would have to give the Scottish Masters XC at Kirkcaldy this Saturday a miss and I contented myself later in the afternoon (after a meeting) with nipping into Northern Runner to get a new pair of fell shoes. The Salomons have been great for the last 14 months, but at £80 a pair in other shops, I opted for a pair of Walsh's which I'm sure will do the job. It was during a conversation in the shop that it was suggested that the bike might be the problem and, more specifically, the position of the seat. I nodded at this sagely, after all, I am an ex-bikie and know all about this sort of thing. But as I passed over my cash and vouchers, the latter a prize that I was advised dated from 2008, I realised that the seat did feel a bit low and I'd spent no time ensuring it was in the right place.
I thanked Mr S for his advice and accepting the antique vouchers and, getting home, checked the saddle position of the Ridley, comparing it to my old track bike. It was an inch lower and about 2 inches further back. It all made complete sense then and I felt like I should be wearing a cone with a big 'D' on the front. To celebrate this breakthrough I popped a couple of brufen and went out for a 6 mile run with the crowd (but without the 6 minute efforts!) which passed without incident. I'm pleased to say I've adjusted the saddle and just might manage Saturdays run. Auntie Aggie gave the bike the once over and thinks the saddle 'might 'do me a mischief' but I told her I wear plenty of padding. She likes the colour but said it's not the bike for her as it doesn't have a basket, and in any case she's no masochist, she'll stick to her Raleigh shopper, thank you very much. I guess I should be thankful.