Trauma at the Three Fords & the Hilly Wallington 10k 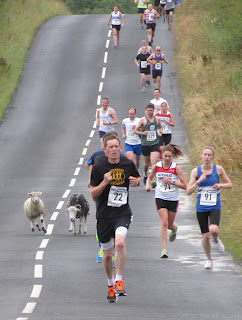 Last Sunday I took the bike out. It was a sunny morning and I thought to join up with a passing Sportive. However, I had got the date wrong, so there was no one on the road, so I hung a right up into the low hills on a route called 'the three fords'. The route, strangely, crosses 3 fords and is around 35 miles. There is a low wooden bridge that crosses the third and you can take this rather than ploughing through the water.
When we were in Chamonix earlier this summer, one of the lads, Mr C, came down heavily on his bike. It was where the end of the wooden deck meets the road. As I took the bridge I was nice and upright and taking it steady (you know what's coming), but at the end of the deck where the plank was chamfered, my slick front tyre slid rapidly away from me and my downward and forward trajectory toward the tarmac and grit was irresistible. I thought this was a carbon copy of Mr C's downfall. This time I didn't laugh. Ragged skin freshly bloodied but with all bones intact, the bike was fine so I rode on, the flies taking no time at all to target the messy wound on hand and elbow.  Happily the Gothic jersey remained intact, but always a shock to have 11 stone and added momentum coming down on top of your extremities. I can remember every bike crash I've had: This will be the 6th since 1979. Always leaves a wee scar in your psyche, and another on your elbow and sometimes thigh, sometimes shoulder.

So this week I have taken it easy with some steady mid distance runs. I volunteered on Wednesday to taxi the youngster plus one to the Wallington 10k. In between torrential downpours, most of the 150 competitors managed to stay dry. Disappointed that the café wasn't open at Wallington. The young one came in 2nd (W).
We gave up waiting for the prize giving.  Took some snaps though - see gallery.
Link -    https://www.flickr.com/photos/34070057@N06/sets/
Posted by AMcD at 08:37 No comments:

Coastal Run 2015 - View from the Midfield

My wife spent £36 on a cold night around February for three of us to run the Coastal Run 2015. A 13.5 mile safari along the Northumberland Coast. The race fills up rapidly, well in advance of the July event.

I had run this twice previously and did quite well, even if I say so myself. However, in deepest frigid mid-winter, I didn't bank on having such a long lay off during early season, nursing my dysfunctional hamstring over the Spring and early Summer months. I reckon its probably the thought of losing the chunky entry fee that eventually got me back to some sort of running shape in recent weeks.

The race is a point to point, so we got dropped off an hour and a half early in Beadnell on the coast on Sunday, not having paid the extra for the bus trip to the start. Normally it might be mild and welcoming, with seagulls hovering lazily and eyeing up the red-top milk, but today this was 11 degrees and decidedly cold and quiet. The wind was also up. 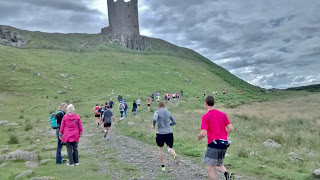 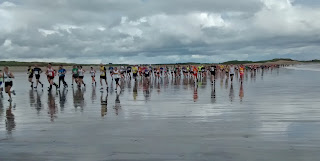 We took shelter with a coffee from the mobile van and watched the runners arrive and it wasn't long before the snaking queue was forming outside the ladies. Extra toilets were laid on today. By 10:30am about 1000 runners were primed and ready to go and shortly afterwards we all set off into a stiff headwind on our trek to Alnmouth. Its an exposed, but lovely run. A combination of sand, sea, sand dunes, gravel tracks and tarmac, but its a long way and my main concern was to finish without having the need to walk to the end. So I started slowly and alternated every other mile from around 7.20 pace to 8 mile pace. I had a gel and my mobile in my bum bag but was well over-dressed for the event and stopped to shed my long sleeve top as the sun made an appearance. There were 3 water stops, and I remarked to myself how similar it wad to the TDF as the occasional, half drunk bottle of water was fired into the air or laterally into a nearby hedge from runners ahead. 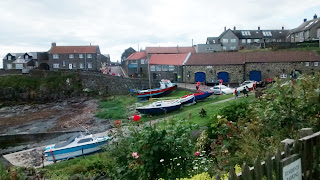 I didn't bother too much to check my garmin and just ran along tucking in, out of the wind where possible. It ended up taking 1.45 for 13.2miles and quite pleasant taking in the view of the field ahead (and behind) from a mid-field position.  I stopped regularly for photos and my comings-and-goings were probably a distraction for some of the runners. 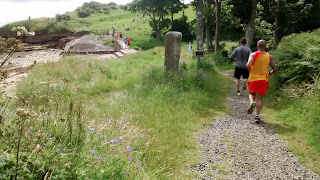 I was tired by the end of the run though and became aware of a shuffling action I've adopted, presumably in order to avoid stretching my upper leg...or maybe its just age.

A small refreshment in the Red Lion where the prize giving was, we had a long chat with some runners from Keighley. 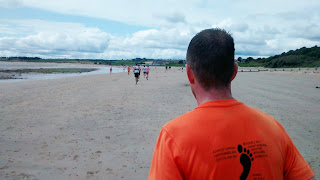 They recommended a race called the Yorkshireman in September. We might give it a go. A half marathon and marathon trail race around Haworth.

The prizes were dished out by Alnwick Harriers (including 9th place for the youngster) which topped the day and we wound our way home with a bit more colour in our cheeks. Not sure if it was from the sun or the wind. 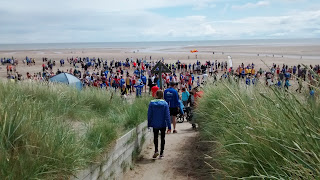 After coming through a steady 9 miler with the group on Monday night in the warm rain, I considered taking my shorts and vest to Sunderland on Wednesday night for their excellent 5k, rather than just my camera. The youngster said she fancied a run, especially when I reminded her about the fast downhill start. Its easily the fastest 5k course around.
This year, Sunderland Harriers split the event into two, with old gadgies and ladies running first, then other Johnny-come-lately's (under 50 men) in the second event.  Having spent all day in the car visiting 3 sites at Chesterfield, Stockport and Carlisle, by the time we got to Sunderland I was quite happy to get out of the car...anymore mileage and I felt I might begin to become attached to the steering wheel. My soles had already welded themselves to the pedals and the clutch knob had worn into the shape of my left hand. Malleable is a good word.
We paid the £8 each and had a gingerly 2 mile warm up. There was a searching breeze, up on the hill, but down into the dip where the majority of the course is run over 2 laps, it was more sheltered. With the 14 mile Coastal Run on the horizon, I definitely wanted to finish in one piece with no recurrence of the injury that has meant no racing since February. As such I was nearly at the back at the start and after 2km of steady as we go, I began to get into my stride, trying to keep it a little shorter than normal. The sweat was dripping down my nose, so I was certainly not coasting and moved on through the 5k without incident.
The Young one was just ahead, giving her previous PB a good pasting and I was just behind her, so It was a sub20, 5k by me, which was a bonus. Didn't stay for the mens event, and was happy to get home for a celebratory boiled egg and toast.  Morale is good. There may be hope for the rest of the years racing calendar.
Posted by AMcD at 11:08 No comments: