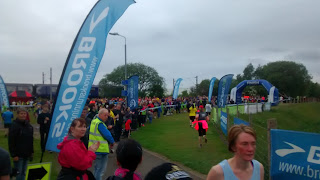 I turned up at the Clive Cookson 10k two Wednesdays ago. I was all raring to go, but found out to my chagrin that it was fully subscribed and there were no late entries or cancellations. It didn't say that on the entry form. Never mind. I wasn't the only one apparently who didnt get a place and left feeling dopey. But it was a nice night and lots of people milling around, so I thought what the hec, dumped the water bottle and pulled up to the bumper of the race at race briefing and off we went. Its a two lapper and I galloped around the course (as my brother put it later 'like a riderless horse'), but making sure I wasn't interfering with the proceedings. At 9k I peeled off and finished off with a slow 37 minute time according to the garmin. I had saved £15 and still had had a good workout. The cake was good at the finish.

A little while ago the Athletics gods down south saw fit to remeasure the Trafford 10k and proclaim it short, so my hard earned time earlier this year was to no avail. Not one to act like a downtrodden prole, I bounced back last week with a souped-up training session on Monday night (I always go well after homemade soup at lunchtime) and a race at sunny Dumbarton (the Polaroid 10k) on the Thursday night. No rose coloured glasses on for this gritty affair. It had to be a 'head down-arse up' workout. One where you are working so hard you havent time to wipe the slaver off your chops or wave an affable 'hello' to your running buddies as you pass them, not that theres many that come into that category. 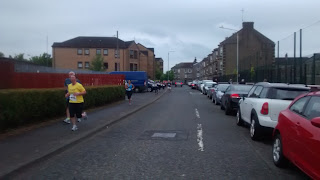 It was a good hike up the road on Thursday. However, with pouring rain in Glasgow at 5pm where we picked up the youngster, it was thankfully dry, clammy and mild as we got to Dumbarton Academy. Plenty of toilets and parking so no rushing around and we warmed up along the first kilometre. The course wasn't what I expected as 700 runners hoping for a good time set off. It was chip timing and we pushed our way out along a flat cyclepath cutting through the leafy evening to Bowling, where we turned and made our way back to Dumbarton. It took me 4 kilometres to catch the flying youngster and she looked very comfortable on her way to a 38 minute PB. I cracked on catching a group of 6 with 2km to go just as they were fragmenting, and half got ahead and the other half fell by the wayside as we worked our way through a few twists and turns around the final kilometre of the local housing estate. A finishing time of 37:35 was very respectable and 5th O50 and another race I've always fancied chalked off the list. I couldnt have run any faster, but the braised steak lunch with curled up steak, knackered carrots and token mushroom from the borders garden centre is to be avoided in future before races.

Next morning saw me plodding 7 miles around the city centre streets of Glasgow before breakfast. Actually quite a bit of hillwork involved running up Bothwell Street, Saint Vincent Street etc. Good for people watching at eight in the morning.

Its the Black Rock 5 on Friday, so no time to sit back and navel gaze. I've picked up a knee niggle and need to have a couple of early nights to get refreshed. Should be a good blast. It always is. Best race in town.
Posted by AMcD at 14:44 No comments: 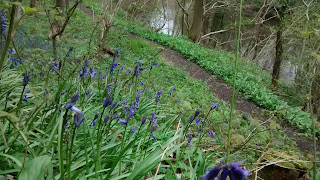 Training was a little patchier than usual this week with 2 days off. In my defense, I would say I was busy at work. But I am also having a wobble from the rigorous, spartan start to the season that has resulted in my folding back the duvet of success and plumping up the pillows of age related achievement. I took in some of the Ashington triathlon last weekend during a training run. Some bluebells were out and I saw lots of tulips. Not much going on, eh?
Knowing that I was attending a 75th Party down south, I worked out it was possible to shoe-horn in a park run on Saturday morning before getting the train down to Peterborough. The youngster accompanied me, like I can't be trusted on my own, and around 700 bleary bodies appeared for this early morning 5k flash mob in Newcastle's Exhibition Park. Aptly named. We were briefed and sent on our way with a cool easterly breeze rolling in to dampen our enthusiasm, even as the rest of Engerland was basking in chunky marshmallow toasting weather. I started well passing Alison Dargie early in the run and I was soon tucked in behind Emilia Petit the pocket rocket from Vale Royal. But she's young and has that irritating bouncy progressive sort of step action that broadcasts 'you sap, you've no chance of staying wth me'....or sub-conscious words to the same effect. 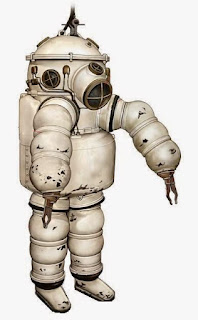 Right enough, at 2km I watched her power away and into the distance.  I was going well at the 2 mile mark with two sub 6 minute miles under my belt, but I suddenly came over all Oceanic; someone had cut the oxygen pipe. The sharks behind began to circle as my gait became laboured and uncertain and then they began moving in for the kill. Two passed in close succession in the last kilometre and then Dargie eased past putting time into me with every stride. The finish line put me out of my misery and I spent a good wee while creased up gulping in the Newcastle air as the oxygen pipework was restored; 18:19 and 10th was a good run, but I need to work on the stamina if all the good early work is not going to be lost later. 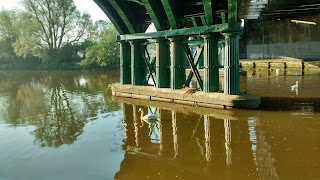 On Sunday after the night before I was out at 7am and running along the Nene and through the local park which was beautiful in the warm sunshine. The rabbits were everywhere and hardly moved as I ate up the pavement. Once again I bumped into a triathlon. Those guys really do like to get up early. I managed an easy 6 before wandering into the town picking up the Cathedral with coffee after and Sunday over running engineering train high jinx to follow. 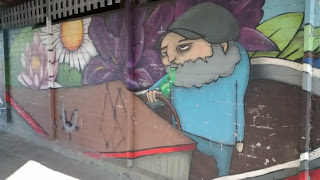 With the sun out this morning, I have bagged a steady 4 and with a session tonight, it looks like it could be a better week on the training front. As if I need any more encouragement, the Dumbarton 10k number has just fallen through the post-box. 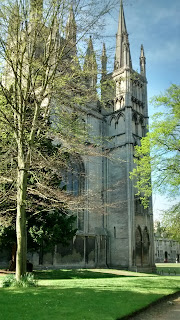