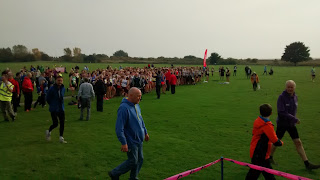 Blimey, the cross country season's got off to a right good start. I was on site working in Blaydon last week talking to a couple of lads. When I rolled up in my Ron Hills and Inov top, one said ' fancy yourself as a runner then?..'. Of course I couldn't help myself, puffing out my chest and straightening my old humpy back after walking around like him out of Wolf Hall,  I let it be known that I was 'the north east fell running champion....paused, then added '2 years ago'.....then looked at my nails, scuffled my feet awkwardly and mumbled ' over 50's, that is'.  He wasn't to know there aren't any proper hills in the north east! 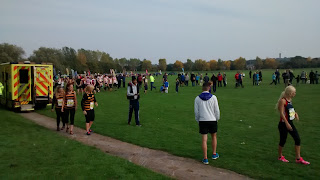 But yes, I still do fancy myself as a runner. I understand that as you age, things become less elastic, things, like ligaments and muscle tissue. Bless you.

I do a bit of cycling, but really, I like the raw burn that running gives. Plus you can burn off double the calories in the same time compared to cycling.
The first cross country for me was Tanfield at the North East England Cross Country League. I felt fine for two or the three laps, and still held it together on the 3rd lap to finish in the top 100. There's no joe public running in these events, so top 100 (6th v50) is fine for an old duffer like me.

Last weekend it was the Sherman Cup; A rolling course around the South Shields leisure centre, what it lacks in landscape value is made up in dog sheit around the place. I didn't make the top 100 but that was a result of a tight hamstring (don't get me started) and there being loads of other guys who can run faster than me. I still contributed to the overall team and club performance though, so confidence is good. On the other hand, however, I have plodded, jogged and minced out a (Ron) weasly 4 miles every day this week just to try and ease the tightness. It would probably be a good idea to do some stretching. Over the weekend I've been out through the woods, an hour on both Saturday and Sunday, so not too bad. Four hours of training over the week is not going to help, but you've just got to grin a bear it. Catchy monkeys and all that.
I made myself available for the Scottish Cross Country Relays next weekend for the Hawks 3 weeks ago when I was feeling tip-top, so I need to have a sensible week this week. Do enough, but no more than that.

Its nice to be out wit the youngsters though who now have caught me up and cruise along on their selfish little upward trajectory of form.....I'm not bitter.....Good to see them running well.
We'll see what next weekend brings. Hopefully, we'll have a team. 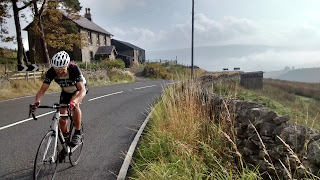 Whitfield. Yes; whose heard of it. Located in a remote corner of hilly and mystical Northumberland the Whitfield community hall was the HQ for the Allen Valley 2 stage hill climb. For those unacquainted with such a cycling event, a hill climb is a time trial up a steep hill....this weekend on the edge of the Pennines.... from bottom to top; no rest; no picnicking.... straight up in parallel with your heart rate and your pre-hired team of paramedics. 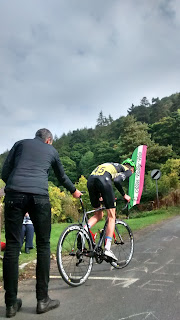 The hill climbing season is short and full of woe; about 2 months, September and October. The events are probably akin to a 50m freestyle for a swimmer. I enter one or two events a year to show off the SC Gothic kit and remind myself why defibrillators were invented.  If you are unfamiliar with the joys of rapid lactic acid build up, this is where you need to be.

I arrived around 9ish in the thick Northumbrian mist. The plethora of dead pheasants on the road was a crime. A crime against pheasants. They really need to get this car thing sorted out.

Around 65 had entered the event, a big field for your average hill climb.  You can't ride these events as joe public; you need to be in a registered cycling club. 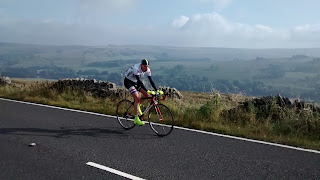 The stages were two hours apart and I was on at 10.18 and 12.18 and I was number 18. A tidy symmetry that boded well for the day. If I had been 18, instead of someway over 50, it would have been that bit tidier, but you can't have everything.

The first stage was a 6.5k ride with 1000ft of ascent north up the A686. Probably the best part of 20 minutes. The second stage was 2km and 400ft from Whitfield to Keenley, a sharper but shorter affair. Whitfield was soon swamped with cars, marshals, lycra and a great turnout from the local host club.  As I looked around at the older riders, I realised I was disadvantaged. My legs weren't shiny or lathered in exotic oils. More work required on this.

I warmed up on the first climb and by the time I had climbed through the cold fog to the sun, I knew that this was not the right climb.  It still took me 20 minutes. As I came back down the hill, the valley below was cloaked in a silent cotton wool. The temperature dropped markedly once into its clammy grip.  Like London in the 1950's, but without the sulphurous bite. 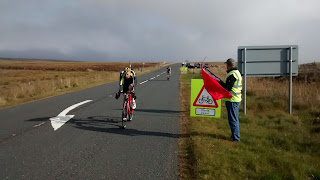 At 10.18 I was off and riding up the right hill. It took me 15 minutes to get my breathing coordinated with my technique and by then I was nearly finished. A long steady drag rather than a hill.  If I had gone steadier early doors and found the right gear and pace, I would have performed better. The road surface was good, it was dry and glorious at the finish marked by the boundary sign between Cumbria and Northumbria. I might have been quicker running it. 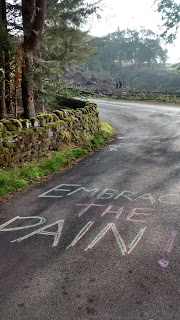 The best bit is coming back down and shouting at the folk going up; instructing them to do what you couldn't do 5 minutes earlier.

There was cake and drinks in the hall at halftime, but I couldn't think of doing the cake thing on the basis that the extra weight might rob me of 10 seconds on the second stage. I needn't have worried.

The mist had lifted by noon, the changelings had changed and the green men watched silently from the trees as I struggled up the second climb, searching for the right gear, but really searching for a breather.  It was over before it began and I was soon cruising back down the hill, reflecting that with a bit of training and weight loss, I could do it better and faster.

I watched the last of the field set off at the bottom and heard the comment ' look at him, he's a great climber. Makes you sick when you can see his spine through his skin suit'. And yes, he was trim and super quick up the hill.

No prizes today, but I lapped up the event. Nice to be wearing a number again on a bike.  Well done to Allen Valley for a great club affair.