Its now Thursday and I’ve had enough time to reflect on last Saturdays Cross Country event at Peterlee. The weather was bleak. It had rained all Friday night and continued through most of Saturday. It was grim. It looked grim. it was cold, cold and grim.
The turnout at this seasons penultimate xc was, therefore, well down. Only 350 finishers in the mens event.


I had sat in the car and changed my spikes from the pathetic stumps that I’d been using quite happily over the previous few months to some silver 12mm beauties that looked like they were fresh from a B horror movie. Keeping my OMM tights on,  I was almost ready to go.
At the entrance to the farm, an old gadgie sporting a fluorescent safety jacket had taken £2 off me for parking before his partner in grime had ushered my old Renault onto a sloppy bog. I parked as close as I could to the entrance track which was gravelled but I was still on the soft grass. I looked down the hill where there were snaking soft ruts of mud and knew I’d be lucky to get out without a push or tow. ‘ We’ve got a tractor’ was the confident mantra the gadgie was rolling out to all and sundry as they pointed us into the deepening quagmire. The course for the xc wasn’t any better; and there was no club tent; instead a club flag was flapping, solitary and godforsaken in the strengthening wind. We were pleased when Aurora offered their facilities for us to stow away our bags.
The womens race was up next and I watched the youngster finish 7th and Mrs Mac some way further behind. I tried to get some fotos, but the light was poor. Did I mention it was grim. Grim and cold... and windy. Mrs Mac was wearing my vest as she'd lost hers, so I ended using the youngsters vest for my event. This was a 36 inch chest, I guess, and I knew it was too tight even as I pulled it over my head. It wasn't a good idea.  I adopted a  ‘lets get it over with’ mentality. It was 3 x two mile laps and off we went after a little delay. It wasn’t really possible to drop into a regular pace as the mud, divets and pools of running water draining from the nearby fields sucked relentlessly at your spikes; frequent buried cobbles and boulders grabbing at your feet. I was buoyed up by knowing I had a couple of millimetres more than I normally had down there (oo,er).
On the second lap I began flagging a little. The borrowed vest, my little straight jacket, was constraining my breathing. I needed all the air I could get, but was working on eighty or ninety percent; I was stuck with it.  I felt like ripping it off.
Some way along where it was uber-muddy ponds- slop-gunge (you get the idea) , I must have caught a spike on a submerged rock and went down, 'Splodge' , landing on my left side and only just managing to keep my face above the murky primeval glug. I emerged like I was a dude from Glastonbury and all of my left side was caked in muddy slime. The beast from the bog. My borrowed formerly blue and white vest could have been mistaken for a 'HBT' affair:  But no course was gonna beat me, and on I went grinding out a lamentable pace which slowed even further over the 3rd lap. I couldn’t even be bothered to tuck in behind Smith from Saltwell as he passed by and I finished 76th  after summoning no speed at all in the long final straight. To rub salt into the grubby wound, we didn’t even manage to finish a team, so I might as well have stopped in the car and painted my nails.


The clean up at home was quite like some of the cyclo-cross events that I’ve ridden and I was happy to immerse myself after an hour of cleaning shoes, scrubbing kit and generally trying to rid myself of the mud. Don’t even start with the good for the complexion thing.  One to forget.


On the upside, Jim Richards ‘Gold Rush’ is nearly finished and I’ve really enjoyed reading about the adventures of an errant geologist.  It looks like CJ Sansom’s Lamentations is the next literary stop.  Next stop this Saturdays Signals Relays. All aboard.
Posted by AMcD at 08:54 No comments: 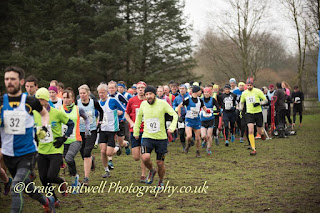 Some experiences leave their mark on you, others simply come and go and the memory bleeds away almost as soon as it’s formed.
Forfar half marathon, which happens in the grey and winter wraith time of early February, is one of the former. It’s a multi-terrain affair, with a circular route that takes runners around Forfar Loch on gravel tracks, a short hop through a housing estate or two, invites you along rutted, puddle strewn farm tracks, along rights of way that cut through landfill sites and old quarries and, when you're especially knackered and late in the proceedings, up 500ft’s worth of wooded track (to yon big f^*k-off hill) before plunging back down through another set of tracks. I don’t profess to know Forfar very well; the last time we were there was after the Glen Clova Half Marathon and that was a good few years ago. From memory, we were locked out of the hotel after the ceilidh up in the Glen, and it took 20 minutes to stir the night porter (or whoever it was that eventually opened the doors).


We had spent the Saturday night in Broughty Ferry and dined at Forgans and very nice it was too. Sunday saw it teaming with rain as we drove up the deserted A90 to Forfar catching glimpses through the lichen clad trees of the snow on the Grampians. Arriving in good time, me, Mrs Mac and the young pretender sat in the car quaffing the vestiges of the McDonald’s Americanos while trying to puff clouds of hot vapour out the window into a scene from Fargo.
The rugby club car park was soon full with 200 or so runners. The dilemma was what to wear on our feet. We asked a few buddies and watched to see who was wearing what, but there seemed no obvious choice. I stood at the back of the car, stroking my chin, pondering, staring into the boot where a pair of Salomon Speedcross lay untidily together with 2 pairs of old road shoes and a pair of newish Hokas that have never really seen action. The youngster plumped for the Salomons and I was inclined at 10:50 to concur. Studs it was. We reasoned that if time was to be lost it would be off-road. 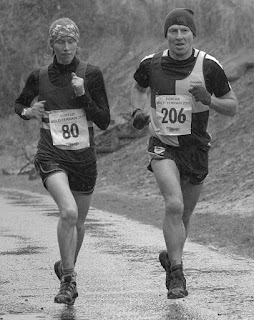 We set off at eleven and I settled in to a seven minute mile pace with the youngster alongside. She has the same cadence and stride length which is a bit spooky. We metronomed our way past 20 or 30 runners who had started too eagerly, getting up to 6:40/min mile-ing for the early part of the race. There was a heavy sleet shower in the first mile and I thought I might be underdressed, but once warmed up, the choice of gear was perfect; Gloves, hat, 2 layers and shorts. We overhauled the first lady at mile 5 when she founded on a soft, muddy track in her road shoes, and, at 7 miles, my running mate took off and over the next 6 miles put a minute into me. However, I was having my own private battle with an Arbroath Footers runner and spent 45 minutes wondering if he was V50. Back on level ground and into the park, the last mile was murder and I lost 2 places drifting from 17th to 19th, but had no resistance left and it took all my energy to stride to the finish line in 1:32.    Mrs Mac went walkabouts with some backmarkers and ended up doing 14 miles but they all got back in one piece. The cake, soup and tea selection was ace and we came away with £50 of vouchers and a mental imprint of a really good day out.  My nips were also suffering from some unwelcome running vest frictional imprinting.
Its good to do different races; keeps you on your toes. Pass the Vaseline.

(photos by fishygordon and craig cantwell - see facebook)
Posted by AMcD at 17:55 No comments: