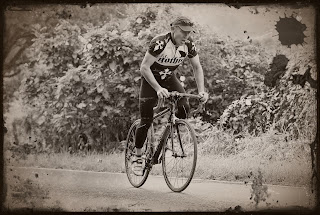 This is the face that you need to pull in order to finish 4th last in a hill climb time trial. As a vet in athletics over the last few years I have been described variously as a 'good club runner', pretty decent (or was that pretty vacant?) and 'a good hand'. My recent demise in the running scene has not gone altogether unnoticed, I think I'm glad to say. According to sources, I am still struggling with an Achilles injury. I would guess that if I pulled the trainers back on and began to wrack up the weekly miles again, I could dovetail myself into the top 5 in my category in most races, be it a fell race or a 10k. Not so with cycling. I have spread myself thin this year, with some running, the karate and now the cycling and, with the bike, at least, it shows. True, hill climbing is a particularly masochistic sort of activity, but the seasons short and I punish myself with only one or two events a year. 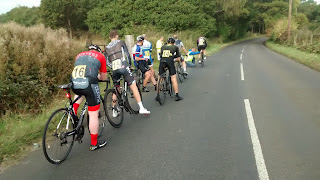 Weight is the key. Weight and power. Power to weight ratio and all that. If I eat less rubbish, I might get slimmer, lighter. Yesterday, working from home and still in my dressing gown at eleven in the morning, I found myself under the stairs with the lights off scoffing a Danish pastry like Billy Bunter. If I couldn't see myself eating it, I wouldn't know I had. Heart rate has also got something to do with it. As an oldie, I strongly suspect I can't get the heart rate up to what I used to and therefore fail to pump the oxygen round my veins and hearteries fast enough. Some sillyologist will no doubt tell me different. 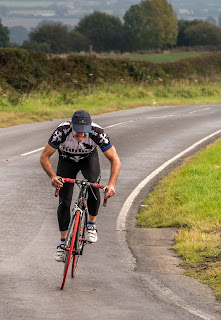 The first of this years paingivers was the Sunderland CC two stage event at Kibblesworth near Gateshead. I set off too fast and then spent the rest of the first climb in oxygen debt and only just managed to retrieve my technique for Jack Earl, the classy cameraman ubiquitous at these events. Its worth the £10 entry fee just for the photo afterwards.  A good pose is critical when a camera is around. Its all about the ego.

I was lying 4th last out of 50 after the first stage. I comforted myself with the thought during the 2 hours break between stages that only people who think or know they're good at going up hills on a road bike enter these. I peered into my coffee at race HQ, willing the caffeine to provide some miraculous improvement in the 2nd stage, but I would have settled for being 5th last. For me, however, it seems to be a race to the bottom. If I sound depressed or despondent, don't worry. I actually find a good moan very good therapy. I would be in a category A prison for the times I 've beat myself up mentally. It's the only way to squeeze something more out of the system. The second stage was a much shorter affair on smooth tarmac for the most part. I set off steadier and simply tried to keep a rhythm going. The finish was just over the crest after half a mile and allowed riders a little respite and a sprint to the finish. As the results came back I found that I had indeed improved, but failed to move up the rankings, and left knowing that improvement is required. I was, however, sanguine about the whole horrible business, feeling a sort of perverse satisfaction that I can bury myself, compete and not be desolated about finishing well down the pecking order. Better than dressing up in sackcloth and dishing out lashings of flagellation. 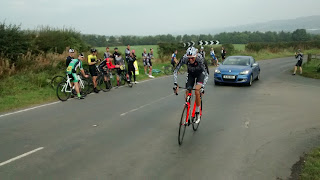 As some solace I was 4th O50, but then there were only five in the field. I am looking forward to this weekends climb at Claybank near Stokesley. I used to train there when I was a teenager. I remember being sick there one Saturday morning after my first beery night as an under age drinker. Oh, fond memories. The even better news is that there is a 60 year old and a 70 year old riding in the 60 strong Cleveland Wheelers Event, so there's hope that I can improve on 4th last. In the words of Jason Kenny, "I started training again and I thought I might try a bit of a comeback. I did a couple of efforts and they weren't great results, but I felt like I did when I was 18. I felt refreshed." So here's to feeling refreshed. 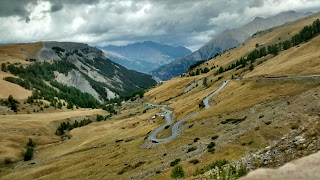 I'm not long back from a week in the Alps. I, like a cohort of other 50 something men, felt compelled to experience the grief that bike riders in Le Tour and the Dauphine Libere face. The pain comes from exotically named climbs like Le Galibier, Le Col d'izoard, Le Col De Bonette and others. These mountain passes have a mystical reputation among cyclists. There's nothing much to match them in Blighty.  I travelled with Mr M. He's not a huge cyclist but is a couple of years older than me. He also felt drawn to tick this slow burner off his bucket list. I was also keen to try on the new Gothic mash up jerseys which look great (even if I did the design myself).
We arrived at Nice, where we picked up a Clio estate after a false start with a fiat. We shoe horned the bike cases into the boot. It wasn't exactly commodious. There was barely enough room for anything more. He had booked a Focus estate, but the hire company advised that they had none. Breach of contract I would have said (or check the small print), if my French had been any better. 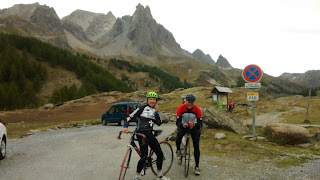 Nice is mega busy. Its getting a new tram down the high street just behind the promenade, and trying to find a parking space late at night was a near impossibility. At least their tram looked like it went somewhere useful. It's chaos in the town.

The next morning we took off after a coffee and croissant to Jouliers, a two hour drive into the Alps. We parked the car in the village and after a pretend steak (reconstituted mince) and sad flaccid chips washed down with tea au lait, we set off up the Bonette. This is the highest mountain pass in the French Alps at 9000ft above sea level (three times Ben Nevis, nearly). As a relative lightweight, I was soon some way ahead of my buddy and climbing steadily on smooth roads. These climbs are long steady drags with frequent zig-zags to reduce the gradient. They were formed so that you could get your horse and cart over the mountain in yon olden days, so nothing desperately steep or arduous. However, this beast went on and on; and on and on. I spent 2 solid hours going up into the sky. I noticed the air getting thinner near the top (who wants fat air anyway?). My breathing became a little more laboured. I imagined, at one point, a grey tree stump looking like a wolf. There are no houses or cafes at the top. It looks like the moon. It's deserted. It also blows a hoolie on the crest.
A mile from the top, it began to get darker. A sinister heavy air arrived like a mugger. The cloud began to drop. The rain began as I crested the final bend. Within 2 or 3 minutes I was wringing as the horizontal freezing rain pelted down (or rather across). As I cowered behind an old ruin, hurriedly putting on a thin orange waterproof and scrabbling through frozen fingers to put my phone into a plastic bag, a little voice in my head was saying 'this is not good, this is not good at all'...I didn't want to be a statistic. My own personal Brexit. I had to get down off the hill, even as the cloud dropped and visibility become next to nothing. Thankfully I had lights on the bike and knew I had to get off the mountain as soon as I could. However, it took me a full hour to come down, stopping once coming out of the mist to tell Mr M to turn around and another couple of times to blow into my numb hands. Not much fun. The dutch guys in the café tabac had a chuckle as we came in, teeth chattering.
'Froid?' inquired the bar man as we order coke and hot choc. and huddled round the cups for warmth.

The next day we chose an easier ride and biked 20 miles up an old gorge near Briancon, but there's nought flat about the Alps and even this ride was testing. The next day after a glass or three of wine and another burger in the evening, we attempted Izoard. The sky was blue and as I climbed it was quite a contrast to Bonette. It took only 1:40 for the climb to the summit. The roads over there are smooth for the most part and it was a delight. I had a teary moment at the top, before manning up and rattling off a few photos. I even had the bravado to drop back down a kilometre to meet Mr M coming up. Descending was exhilarating and back into town, it was hot and sunny. We sat on the kerb and feasted on ham,brie,baguette and plum tomatoes. This was our lunch every day. 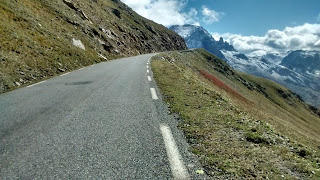 Later in the day, we drove to Les Deux Alpes, a ski resort at 6000ft. There had been snow on the peaks the night before and things were decidedly chilly. We were not far from Alpe D'Huez. I could hear the metamorphic behemoth growling down the valley as we approached our hotel. The resort was surprisingly large with more than a mile of high street, but it was truly deserted. Thankfully we found a great restaurant (Le Rustique) and spent two nights at the resort. We rode the back of Le Galibier on the Sunday and met a couple from Oregon and a bunch of lads from Cork. It was brassicks though. 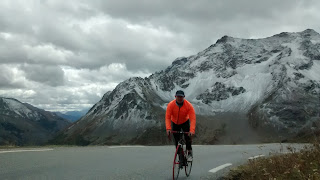 The threat from Huez was regrettably enough to scare us back to Digne Les Bains, back down toward Nice the next day. We took a back road for a low intensity spin and still ended up finding Le Col de Corobin at the end. It was then onto Nice, our final day. Huez will have to be tamed on another trip. Before our late flight we managed 20 miles up and down the flat and balmy sea front. We dodged other bikies, joe public, suicide scooterists and flash cars with even flashier occupants. I welcomed the easy ride. I had developed a sore knee, maybe not surprising after 18000ft of climbing in the week.

I have a 2 stage hill climb at Gateshead tomorrow. Plenty of altitude, but I can be fairly sure there'll be no snow at least. Next time, I think I might give Huez a go, but perhaps in June.
Posted by AMcD at 09:16 No comments: