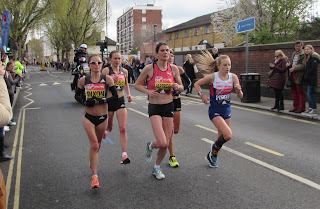 It was London marathon weekend again. I put up a limp resistance initially at the idea of going south again, but I was easily beaten down as Mrs Mac eyed up a visit to Les Miserables and a few nights in the big smoke and bright lights. As the weekend neared and the train was booked, my rickety facade collapsed and I found myself adding War of the Worlds (dah,dah,daaaah) to the weekends menu card. If you can't beat them and all that. 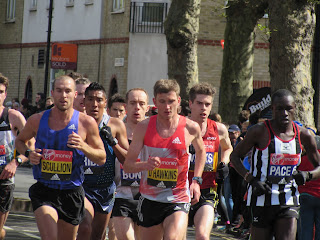 Miss L. had deferred her entry to run this years marathon as she wasn't 100%, so we were just here for the beer (so to speak).

We had an easy wander around the toon on Friday before the show. The highlight of the evening was us visiting a coffee shop and over a bowl of soup, applying on line in a rush to enter the Black Rock 5 which filled up between 7 and 8pm on Friday (1000 spaces gone...just like that). Almost as exciting as doing the race itself. After some chin scratching, the Polaroid Dumbarton 10k also looks quietly inviting and just might be worth a punt. The bleary notion to have another go at the Edinburgh Half late in May was blown away after I saw the stupid entry fees. They certainly are cranking these up across the board.

After the show and with youngster 2 (lets call her Miss C), in tow, we agreed on a park run 5k in Fulham Palace Park only a mile and a half from the hotel for the following morning.
On Saturday at eight, we cantered down the high street in the cold and light drizzle and arriving with half an hour to spare had a look at the course. Seemed fine. No hills. Not too twisty and around 150 starters.
We had a short brief and then we were off. Its a two and a half lapper and there were occasional danger jockeys coming the other way; clearly citizens who were not lightly put off by a mass of sweating stampeding park runners coming the other way. As I had picked up a cold earlier in the week, I took it steady with a 6:27 first mile, then 6.17 and 6.15 or thereabouts for an 18:30; 15th place at 81%. Pleased with that given my tentative start. I had a warm down with the speedy youths and it was back to the hotel for a wash, breakies and, later, the Les Miserables matinee. Suitably refreshed afterwards, we picked up an Italian's in Hammersmith.

On Sunday morning made our way to the 11 mile mark at Rotherhithe to see the marathoners. And very fast some of them were, too, I can tell you. One elite female peeled off immediately after she passed us to go into a shop and we never saw her leave, so not sure what happened there. Other than that, it was an easy weekend and I admit to being happy to get back to my own bed last night. Watched the BBC highlights today... usual blanket coverage of elites and charity runners although they did cover the leading Brits once or twice, so that was something, I suppose.
Good to get out this morning for an easy 4 and another short run tonight is still possible. 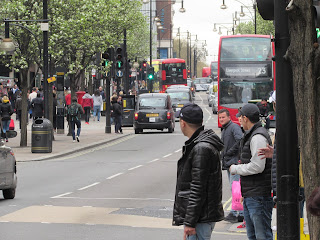 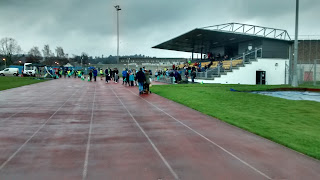 I'm not at all sure how I found the Tay Ten. It wasn't on the Scottish Athletics Website. A flattish ten mile road race based around Perth; Not too many of those around.  After missing the Thirsk 10, I thought this looked interesting. The event was all pre-entry at Entry-Central. There were 350 places up for grabs and a video that showed a route winding its way north of the City along the rustic riverside of the Tay.

Me, Mrs Mac and the youngster were entered: There were also a capacious squad of Dundee Hawks on the entry list. 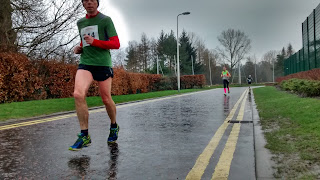 We set off from home at 7am and listened to the news on the way up north along the empty roads about another blossoming drug scandal. Are we growing a little tired of the regular exposure and inevitable, trite rejection of these revelations?.. but it gets you thinking 'whose on what' in the running 'neighbourhood'. Maybe I should get my hands on something performance enhancing, other than extra honey on my toast, sliced banana in my porridge and a sports gel stuffed down my shorts.

Perth was quiet and grey with no wind and a light drizzle falling as we picked up our numbers. There were a large posse of marshalls evident at the local community centre. It was the hub of the race. It began to buzz as the punters arrived. I liked the JogScotland Hazelhead runners gear. Bright, coordinated and stylish.

The start was at the local athletics stadium adjacent to the community centre and, as we lined up, I saw plenty of Dundee Road Runners, but no vests that matched my own from the Hawks. 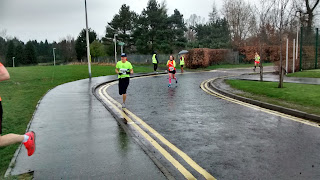 We were off at 11am and I fell into my stride early. At mile 2, I latched onto 2 runners who had started steady and had begun to run down the faster starting runners ahead.  One was from Fife and the other from the organising club, Perth Road Runners. Initially, I tucked in, but as there was little wind, there was no obvious benefit to be had and I tried, instead, to pick the best racing line through the puddles

Our combined trio began to eat up the gently winding paths along the riverbank; the Fife runner (Aitken, v50) looked strong, grinding out a merciless 6:15 pace, which, after 4 miles, began to take its toll and revealed a hint of mild threat in this hinterland of park run urbanity. Were my new buddies trying to leave me behind?  Was the picnic along the gurgling water of the Tay about to end?

The Perth runner Fotheringham (also v50) sat on Aitken's shoulder and looked back at me with some regularity, but he needn't have worried. Shortly after we overhauled another Perth runner, my resolve began to unwind at around 5 miles and a small but unequivocal gap opened. There was no Cheerio. 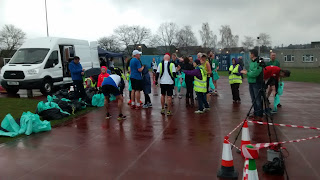 I began to look for something, anything that might get me back that 10 metre gap, that 20 metre gap.  At 50 metres, I reached for my gel. I tore off the top and supped the sticky concoction.  The gel began working its magic just as the previously overhauled runner came past and I squeezed the living daylights out of the lifeless tube of this remotely citrus affair. Having dropped to a 6:30 pace at 6 miles, I began to re-discover my strength of will and convinced my mojo to start stoking the fire again, delivering a couple of 6:20's toward mile 9 where I passed Dick of Dundee Road Runners. Finishing in 63 minutes it wasn't so much an authoritative performance, but rather more a thinner, plausible one for 3rd v50  (15th).  The youngster got a PB and 3rd senior lady and Mrs Mac, a strained calf for her efforts, but we can't orchestrate all the days events along the silvery Tay on a drizzly day . 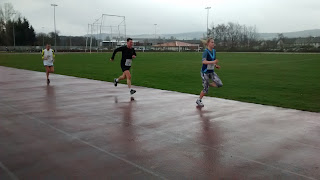 There was no sign of my errant clubmates. I was looking forward to the chat.
This is an event I can recommend and good for a fast time. A nice goody bag afterwards, too.
Sometime later, we ended up at a hostelry nearby where we struggled a little to wrestle with the rubbery, pre-fried onion rings, the miserly tub of coleslaw, but generous portion of bread and chips. Thats probably because we're athletes and spend our time trying to watch what we put into our system. Know what I mean?