The course is always exposed but usually dry underfoot; Steady rain throughout the event. Not the best weather for action

The Border Reivers Half Marathon 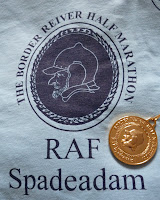 A half marafun...at lunchtime....on Thursday....ain't normal?!
The benefits of being self employed is that the boss is (usually) very approachable, even accommodating when it comes to asking for time off for running events.
Organised by those boys in blue, it was announced at the briefing that the prize for the 1st RAF team was £1000, with second prize a measly £750. Not bad; not bad at all.
Around 100 runners of whom some really should have been knuckling down, elsewhere, to help Gordons economy, turned out for the border reivers half marathon. Around 4 miles is on tarmac and the rest on gravelled forest roads which pass through moorland and forestry north of Gilsland. Its pretty much as far north in England as you can get.
The course goes north past Lowland Hill and Blackshaws Hill before turning west along Calf Rigg, Baron Pike and south past Butterburn Hill, Nick Hill, Kingwater Hill, Hill Hill...you're getting the idea; its where the Everest Sherpas come for training!
At 3 miles there were 4 of us together with the leader well away, and for the next 5 miles we jockeyed for position; One lad got away at 8 miles and the eventual 3rd placed runner took off after him at 11 miles. I struggled on one or two of the rises in the latter half but managed to get it together at the end to finish 4th fighting off a runner who had held onto 2nd place for the first 4 miles.
I would have liked to stay for the refreshments and the presentation but they were planned for mid- afternoon and having started at 11 noon and taking 1:24:58 to get round I opted for refreshments on the way home. A suitably low key and enjoyable event, with mile markers, showers, T shirt and medal and the competent organization you would expect from the chaps. Wonder if I'll get a mention in dispatches?
Posted by AMcD at 16:20 No comments: