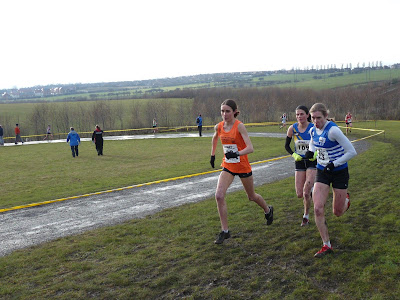 The soft conditions underfoot might have suited the athletes who turned out for the Northern England Cross Country Championships, but it took 2 tractors to pull several cars out of the country park after the wet ground softened after a hard nights frost.
I managed a lap before throwing in the towel with knee pain, but thankfully there were enough guys ahead for me not to be a counter. Results up at the Race Results site. Selected Photos in the gallery (click on the picture in the right hand column).
Posted by AMcD at 20:14 No comments: 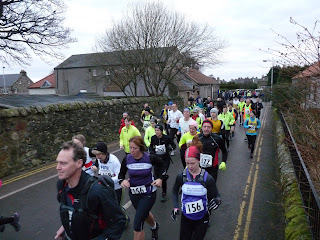 It was all just a blur...
Driving north, we ignored the thick mist over the Forth Road Bridge and made our way to Falkland. It was my first appearance at the Devils Burdens Relay, a relay race across the heather clad Lomond Hills in Fife.
It's run over 31 km and consists of 4 legs for teams of 6 (2 legs run in pairs).
I was on Leg 3 with Steve Mason with 6.4 miles and 1800ft of ascent (and descent) to contend with. I took a couple of snaps of the 9.30a.m. start for the 'slower' runners and then cleared off to Scotlandwell where the third leg started. There was a great buzz around the Falkland HQ which I guess is becoming the Scottish club opener for the hill running season. 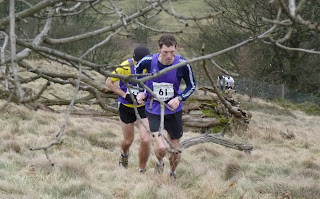 Having ran Simonside the previous weekend and only having 20 miles of light training this week, I felt quite fresh but couldn't decide on what to wear. Eventually going with the gloves and hat, base layer and tracksuit top, we were soon off after the kit check up Bishop Hill as bodies arrived and left in a constant stream of sweaty (or is that glowing) humanity. There was a vast array of techniques, fashions and club regalia on display today and the weather was calm, mild and thankfully clear on the high ground. 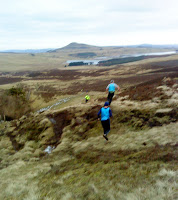 We sat behind the Ochil duo of Andrea Priestley and Catriona Buchanan for a while and then saw 2 Portobello's come past; then we passed a Lothian team. Many of the pools of water and puddles were frozen which made jumping across them a bit tasty if you happened to catch your heel on the edge of the ice. We were overhauled, in turn, on the main climb of the day up West Lomond by John Kay, one part of the Fife team. Being the local boys, we followed them and careered downhill before traversing the North face of the Lomond (really just an impossible traverse along a steeply cambered grassy slope) for a mile or so. This was tricky as my Salomons are just about to give up the ghost.
Overheating on the low ground I stopped and gubbed a couple of handfuls of water from the burn before we headed into West Kilgour Forest as a Lomond runner and 1 or 2 others came past. We managed to haul in a Bellahouston team as my partner for the day found another gear on the mile of tarmac which led to the end of the stage. 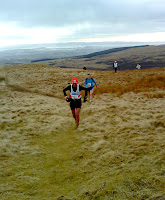 Strangely I had been happy on the hill, but like Simonside, I struggled with some calf muscle tightening when the gradient levelled out and was happy to see the line and smiled at the melee of coming and going at Strathmiglo. It was a right old stramash. Sorted a lift back to the car and then soup at the finish.

There are always plenty of club entries for Carnethy from Ireland and south of the border so I reckon this is an excellent team day out and should attract good runners from down south. What else is there to do in January anyway. I'm sure I'll be 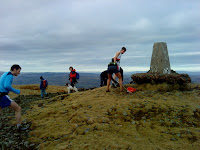 back!
Ended 24th of 100 teams. It was a cracking day out. Results now up at
http://bcruickshank.brinkster.net/DB_results2011.htm
(Photos of Stage 2 finishers and Stage 3 runners coming soon).
Thanks to the photographer, you know who you are!
Posted by AMcD at 22:23 No comments:

When was the last time in Northumberland the winner of a fell race was a runner from Ochils and when did the first 5 finishers include runners from Lochaber, HBT and Dark Peak. Well it was today at the Simonside Cairns Fell race. 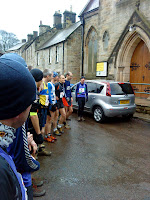 As the drizzle came down at the start of this eleven miler, one hundred runners struggled with their wardrobes weighing up the pro’s and con’s of wearing their jackets, or short sleeve or long sleeve, two layers or three or tights, shorts or those clingy lycra pedal pusher things. One thing was for sure. We were all were going to get our feet wet. This race is well known for giving each runner first hand experience of luxuriant, deep sphagnum moss, boulders, peat and challenging running conditions.

Setting off from Rothbury, the first two miles is uphill on a combination of road and trail before the real graft begins. The path reverts to a barely discernible mix of reed grass and heather and soggy gravelly channels filled with water as dark as an Islay malt in a pint of black stout. Plenty of styles to step across or fall over as well. I sat in behind David Armstrong (NFR) and Neil Cassidy of Tynedale but there was a lot of adjustment in the order as the conditions prevailed. It really was a question of concentrating hard on every step, deciding when and where to jump or skirt or plough through the murky and often icy water. 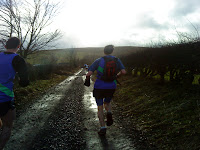 I was 3rd in this race last year. I should add that this was because 3 or 4 lads in front went walkabouts. This year I counted at least 12 ahead and I didn’t recognise many of the front runners. Incomers. But from where? 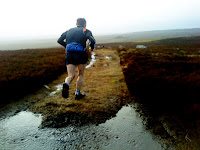 It was windy as hell as we went over the top of the hill, but at least it was mild as I kept the compact group of Redman (NFR), Murray (Teviotdale) and Daniels (u/a) in my sights. I was passed by Armstrong at around four miles and then David Steel (NFR) at five and had that sinking feeling as I hung off the back of this handy posse, envious of the possible shelter and unable to harness my horsepower or to get my feet to go where I wanted through the saturated ankle deep moss and heather. Mincing across the skittish duck boards, I was 20 seconds adrift as we cut through the forest and then 30 seconds as they pulled away at Dove Crag. Daniels stopped a few times and he fell behind just before the forest. Reaching the top of the crag, I told myself I was good on the downhill and at last found some inertia over the newly laid trail of geometrical blocks of buff gritstone. It seems someone’s been building a new roman road. 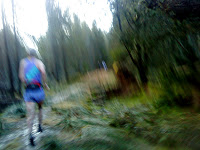 I was working hard now and eventually caught Armstrong at around 8 miles but David Steel proved more elusive and I only managed to catch up with him with just over a mile to go, just as Redman, who had seemingly gone off course earlier passed me and just as I developed a familiar cramping twinge in my hamstring.

I slowed and running back into Rothbury, I was happy to keep the cramp at bay and finish without having to stop. I had a natter with some of the lads, a quick change and then a cup of broth soup in the Newcastle Hotel with the photographer for the day. For the purposes of the blog he said he was to be referred to as ‘the outsider’. As the prizes were dished out I was comforted to know that my relegation from the top 10 was partly a result of the appearance of Messrs Anthony, Gay and Smith who spiced things up at the front. The ‘outsider’ said that Anthony looked like he was really shifting. That’s probably why he won. Results and photos up already on the NFR Website. More photos on the link on the right margin.
Posted by AMcD at 15:46 2 comments:

Discharge at the vicarage 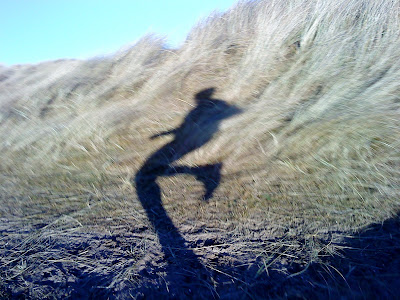 I went back up to Amble to retrieve the Ridleys. They've been languishing in the bike shop over the Christmas break. Its hard to believe I blogged about them back in October when I was planning the re-launch of my cycling career.
Great to have both back intact, even though there's only 1 or 2 cyclo-cross events left. I know I won't do anything other than hopefully get round the courses, but it's a start. If I am the vicar of Ridley, then its nice to have the bikes back at the vicarage!
Anyroads, it was a cracking cold fresh day so I ran for 40 minutes along the beach south of the town.

Aunt Aggie came out as well in her knitted briefs and mp3. She even had her teeth in. She's downloaded a group from Oz called Temper Trap and I must say they sound pretty funky, even for an old bird like Aggie. Sort of snow patrol-ish she says. I think Midnight Oil meets synth (for the re-mixed tracks anyway). Fifteen miles run on Sunday and another 8 last night before I hobbled off to the clubhouse with a dodgy knee ligament thing. Will try the woods tomorrow if I'm up to it.
I leave you with a lush picture of fresh discharge. 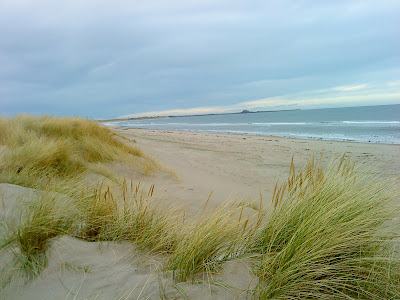 The landmarks of Bamburgh Castle and Lindisfarne are well known tourist destinations on the north east coast line in Northumberland. I've never explored the coast between them and only ever been to Lindisfarne once. It would be good to run across the causeway to Lindisfarne when the tides out. I took the opportunity at lunchtime today to get a bit closer.

Leaving Belford I headed east across the A1 and railway line and ran around 7 minute pace on good roads. It was all downhill for 3 miles before the fields levelled off and I could catch the nip of the salty sea air.

There was no one around the deserted roads. A few puddles were still covered in ice and there was also some patchy black ice. After passing a couple of farms, the road ran out and became a sandy track covered with moss. Nice and springy underfoot. 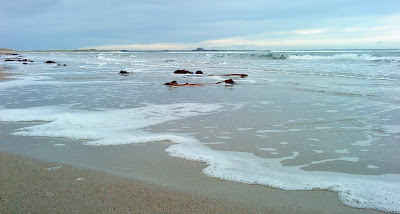 I continued across the undulating Ross Links with the dunes and Marram grass in front of me and had to cross a low lying boggy patch. I couldn't see a way around it and failed to keep my feet dry, dancing in vain around the icy puddles and across the thin ice which was so thin it broke as soon as my foot hit it. With squelching shoes, I soon arrived at the lonely beach of Ross Bay with the Castle visible to the south and Lindisfarne to the north. The Farne Islands were just discernible beyond the breaking waves. On another day I might have carried on northward but as 30 minutes had passed already, it was time to turn back to run the 4 miles back to Belford.
Posted by AMcD at 17:35 1 comment: 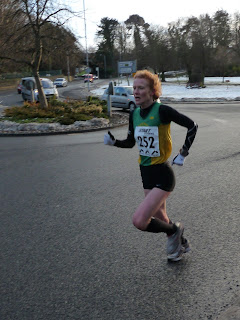 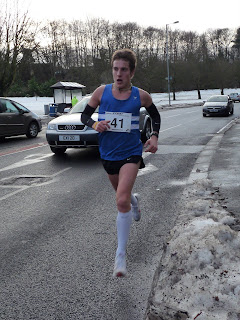 It was the Hillforts Fell Race at Rothbury this morning and the Morpeth 11k this afternoon. Managed to get a few good photos of both which are now uploaded (click link on right).

The results of the Hill forts race are on the NFR site and the 11k results are on the Morpeth Harriers site. Superfast reporting. Top Marks.
Posted by AMcD at 17:28 No comments: