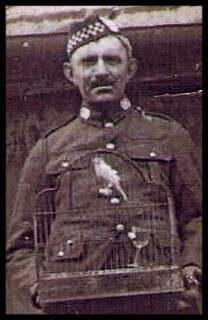 Its been a weekend filled largely with black and white images of men and women and a time gone by. A weekend filled with nostalgia and an intensifying sentimentality. I think they were made of sterner stuff in those days. You had to be. I can say without fear of contradiction that it does make you thankful for what you have and the times we live in, with all our little campaigns and superficiality.

I was in two minds whether to post photographs of several previous generations of my lot on facebook, aware that I was partly basking in the military glow of others, but here's an oldie; my great grandfather. Having been rejected by the Argylls (A&HS) in the mid 80's when I was on the bounce from being made redundant off the North sea rigs, I have sometimes thought that I should have had another try. But the army's commission board's assessment was right, in so far that they didn't think that I was sufficiently committed; and I guess they were right, otherwise I would have had another crack at it.
But why, I hear you ask have I time to engage in all this navel gazing? Its because I've done not a jot of exercise since the Drighlington 10 (see previous entry). I would add that the results from this event have yet to appear anywhere. The organisers need to give themselves a blidy good talking too. This is in spite of repeated texts. Lets face it, I have little else to do but hassle the organiser.
On the home front medical matters are still not fully diagnosed, but I think (and to a degree, hope) that tests will reveal and confirm a tear in my adductor muscle, the one in the abdomen you can feel when you try and do sits ups. I have only myself to blame I fear, trying to force matters and a big gear on the cycling front. However, the lying around giving myself lots of RnR has not made a bit of difference. The bikes gather more dust. The trainers continue to curl up in the corner of the cupboard like stale bread left too long. I am in a sportsmans limbo. I will be demoted back to a white belt at karate soon if I don't get a shifty on.
Once I know the score I can make plans accordingly, whether than be selling the bikes and taking up guitar or chess or booking myself in for some theatre action, you know, the surgical type.  It's frustrating, but we're not quite at the Terry Jacks stage (goodbye to you, my trusted friends...) 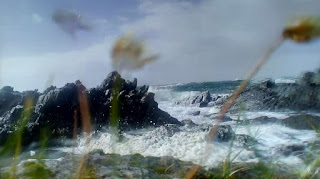 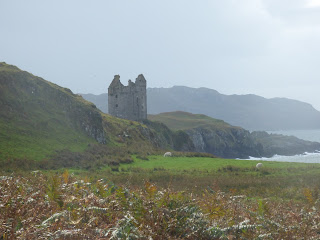 '
I did breach the exercise embargo last month in 'Feldy when I met up with the lads, but other than a rapid 25 miles on two wheels, its been literally pedestrian.  I guess you can't really count an ascent of Schiehallion (the fairy mountain) or long walks in the slate islands (Seil, Easdale and Luing) or even a wandering circumnavigation of Kerrera as sporting triumphs. Power of Ten aren't interested. Neither can you count the short jog to the pub a week ago, although I felt mightily better on my return.  I even had to stand and watch from the sidelines at the recent Amsterdam marathon. I adopted the stoic and sanguine approach.
.
I'm hoping to get the benefit of all this new fangled medical technology and will soon be on the road to report future sporting malarkey. The season up to July was very promising and I should be grateful for my fitness early in the year; but physical dormancy is a challenge. It also doesn't make for an interesting or busy sporting blog!
Posted by AMcD at 17:31 No comments: