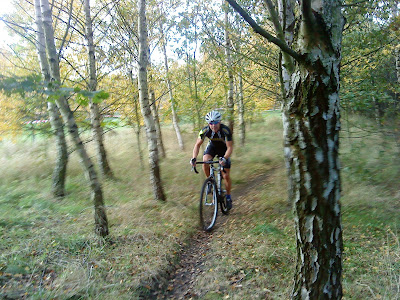 Baby wipes have their uses. Useful for all sorts. Returning from a weeks’ holiday down south, I found I had some in the car, but today they were well out of their league and the clag that was stuck to all parts of the Ridley called for a small band of riot police with water cannon coupled with a couple of curling team sweepers with industrial strength scrubbing brushes...

Last weekend’s 5 mile road race in Milford, Bournemouth was followed up today with a 7 mile run before I peeled off from the Sunday gang and, faced with the possibility of painting the Hall, I opted for a cyclo cross race at Whickham Thorns, Gateshead. Two weeks earlier I had rode a different course in Gateshead that was bone dry. Not so today. 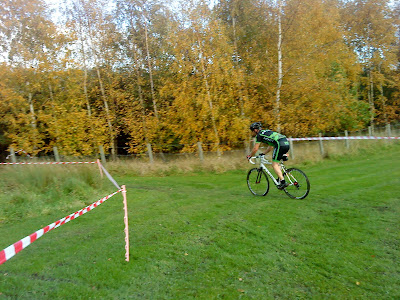 The race was part of the North East Cyclo Cross league and it was a mud fest. A very enjoyable one. On a hilly course perched halfway down Whickham Bank it was evident early on that there’d be a need for quite a bit of running (with your bike) on the uphill stretches and some proper bike handling skills were required. These, I’m afraid to admit, were sorely lacking in my display. I even hit the deck on the warm up lap and continued this unwelcome attention seeking behaviour throughout the hour long race. With around 60 starting, I was well to the back but before 10 minutes had elapsed there were casualties all over the course, men in muddy lycra leaning over their bikes, pushing tired and emotional aluminium and carbon frames and spooning sludge, grass and worms out of every conceivable crevice. I continued to work around the course at times jumping off deliberately to run or just laughing as I (yet again) picked myself up off the deck. I was passed halfway through by a rider from Malton who I presumed was leading and later a few more but not as many as a fortnight ago.

With a continued high drop out rate I was determined to finish and improve on my 54th place last time and despite going down more often than a racey metaphor, I ground out a ride.
When the bell went after 50 minutes I thanked the race referee for putting me out of my misery, but really it was a blast and I celebrated the last lap by staying upright all the way round the course. In any case I was keen to finish with the sun up there was a danger of me drying out and with the amount of mud on me I could have baked solid.

It took an hour to clean the bike when I got home and I ended up taking the wheels down to the river with a scrubbing brush like something out of the old testament. Much more of this malarkey and I’ll probably have to apply to the Environment Agency for a licence...(Later I found the Baby wipes cowering under the car seat)! 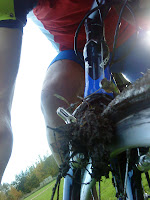