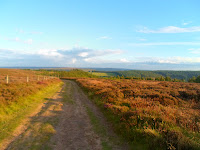 August. I’ve got 5 weeks to get into some sort of shape for the Ben Race. I was all for cancelling this year, but now that fancy hotel’s been booked I’m going to have to up my game and get out in t’moors.  Its been so long since I did any fell running I can't remember why I had to stop.

I sat in the traffic at 5.30pm drumming my fingers on the steering wheel as the line of cars chugged forward. We lurched from lamppost to lamppost. Someone was playing some Country and Western in the car beside me. It began to dawn on me that there was little chance of me getting to the start line on time for the Gribdale Gallop fell race in the North York Moors. 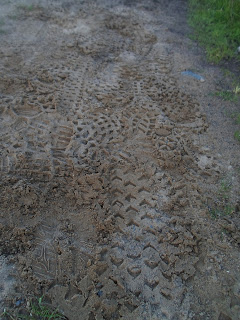 I arrived at race HQ at 7:24. I pulled on my shoes and bum bag and stepped out of the car at the same time as a Durham lad across the car park. He asked if we’d made it in time, to which I replied ‘No. Ten  minutes late’.

Organiser Parry was counting in the youngsters from the kids race, but was good enough to advise us that we were actually only 9m:45sec late so, with that cheery message, off we went in pursuit of the field.

Durham asked if I knew where we were going to which I replied ‘haven’t a clue’.  The heart rate was sky-high but the ground was firm'n'dry and we soon got to Cooks Monument (aye,aye) where the path goes three-ways (my,my...ok, enough already).

We puzzled over two tracks which were evidently red herrings for several minutes before I got my local native trackers head on and took off along the third, which turned out to be the right way.
Durham man couldn't hang around for my Ally-come-lately, pussy footing around the Moors behaviour and the bounty hunter easily danced away on the cobbles into the horizon. I had a good sweat on as I ran. I could hear someone playing dixie on a highly strung piano and the flies were having a party around my head. Break out the sarsaparilla. 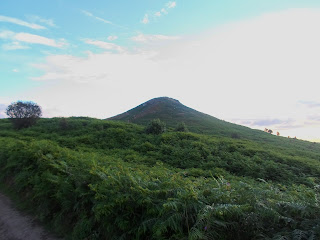 After the second climb I was all on my own, and with no chance of delivering any sort of performance, I got the camera out and the run became a landscape art-attack. The tape marking the route was, let's say, in places, in a little short supply, so I kept my eyes on the prize by studying the tracks for studmarks like a latter day Davie Crockett. It was taking an age before I spied a lone runner ahead lally-gagging at the back and then just ahead of him there was a small posse of 4. I felt like shouting ‘Whohhh’, putting my hand in the air, rounding them up, making a circle with the wagons and stopping for the night like Big John. But with no coffee or beans there was no choice but to make for Roseberry Topping, the local crag (I know...sounds like something you put on your pudding) 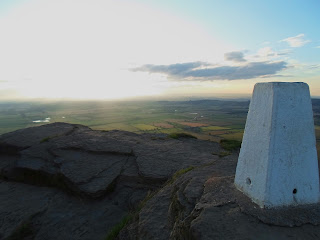 My spirits were lifted as I climbed to the summit by the small stampede of runners coming down the adjacent track and it was no time before I’d passed 10 or 12 more of the pale riders, the low sun catching a few of the puffing puce faces (All we are saying is give puce a chance).

I snapped a photographer snapping me on the run in, back to HQ, but there were few bodies around to pass and I pulled my sombrero down across my eyes, slotted my samsung into my holster and headed for the line before the dingo’s came out.
Its going to be pretty much fell and hill running this month, so if you don’t want to read about it, look away now (ya’aaalll) 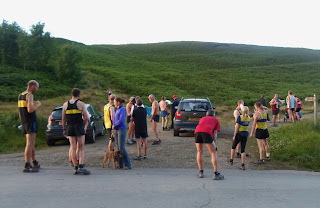