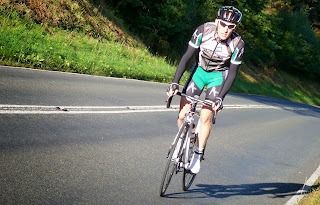 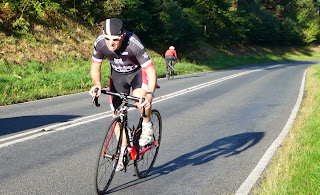 Cleveland Wheelers Hill Climb at Claybank. Another hard day at the office, but today I got the photo-copier to work, so to speak.

I've squeezed in a few miles this week on the bike and as this was the last one I've entered, I took two bikes down to leafy Great Broughton on the edge of the North York Moors. It was an experiment to see if my performance on my big geared condor would out-do the recent rides on the other condor with a wider range.

The field was a mighty 60 riders bathed in early morning sunshine. It was unusually warm. I was off at 9.11am. I spent many a gasping ride up Claybank having been to school in the early 80's a stonethrow's away. I didn't think it was easy to get up then, and today was no different. At the start the rider behind me said she liked my gear. Riding for Gothic, you occasionally get this sort of thing, but I didn't know if she was trying to play with my mind.

There was a long slow drag to start with, maybe half a mile, before the road lifted a little and we began to hit the scarp, and as it kicked up, I caught a gent of older years ahead of me. There was a couple of folk here and there and as I began to toil, the low gears I would have looked for weren't there, so I was forced to grind out what I could on a bigger gear. There was a good group a little way on but nobody was shouting for me in that group; then another group further up, and they were more vocal. I had accelerated a little thinking they were at the end, but it was a false dawn and then as I swept past, I saw the finish another 80 metres up the hill. Summoned up all the energy I could find and gave it big licks over the finish line where there was a good crowd.  It was a cracking morning and I would have liked to ride on for another while, but nipped back and stopped at the sports club in the village, the event HQ, to have tea and cakes and a slice of results. and quite pleased to see I'd beaten a few who I've finished behind over the last 3 weeks, so maybe the bigger gear is the way to go. With no more events planned, we'll have to wait for next year. Next, back to fell racing as Manor Water looks tasty.