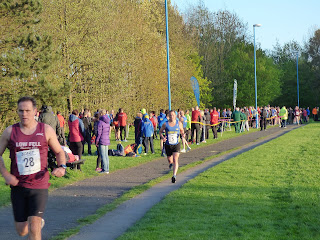 The need to blog has been bouncing around the bottom in recent weeks, but I've been tipped over the edge by a mixed metaphor and last nights late spring performance.
It was the North East Masters Relays. Lots of old folk trying to relive past glories. Evocative of a wrinkled Chariots of Fire where we're all white vests, awkward baggy flapping shorts and the Greek keyboard king giving it large in the wings on his stylophone (I imagine).
I had no intention of running this. It wasn't on my radar. I was busy doing other things in my mission impossible control centre. God, its dark in there.  All buzzing, clicks and L.E.D screens. Dangling from that rope all day really takes it out of you.

A weekend in London at the marathon watching the daughters gently frying to a brown crisp over 26 miles was enough for me to mooch backwards discreetly from competition. I had just got rid of my 3rd cold of the year, which is just ridiculous. I wonder if I am someone's experiment and they just haven't got round to telling me. 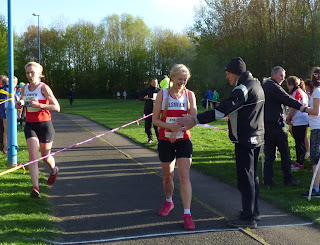 I was contacted last week and asked to run in the crack over 45's 'B' team. Considering I am a month off a decade older, I was both sanguine and flattered by the request (obviously of a desperate man). Being the reliable Johnny that I am, I confirmed my availability in the soon to be forgotten 3 man team.   By the end of the week, however, I had received an upgrade to the 'A' team after the withdrawal of Rob H pulling up at training with a recurrence of the hamstring thing. Not everyone had been taking it easy, it seems.

Happy with my sub 13 minute relay stint at the Easter Elswick Relays and a nearly sub-19 minute Parkrun in Southwick, I am in good shape. Don't count your chicklets, however. Work is doing its best to thwart my sterling efforts (thwart...there's a word you don't hear ever...what you call a person who tries to thwart you?... a thwart hog).  But I've now reached capacity and not taking any more work, I can find time to breath and blog and other things beginning with the letter B. 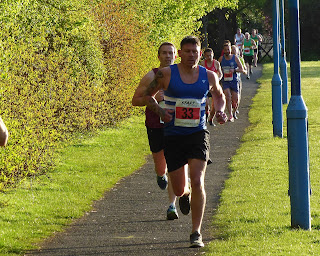 The NEMAA relays comprises three legs each 3k long (about 1.9mile) and twice round the Campbell Park in Monkton, south of the Tyne.  I arrived in the sun in good time and secured pole position starting first. Around 30 or 40 set off and I cracked around the first lap. I settled down toward the end of the lap and took shelter where I could where the park road was exposed. I even recall telling myself I was feeling pretty good, but that errant thought was parked soon after when I began to tire. The 5:55 first mile was not reproduced in the second lap and it was down to around 6:11 at the end.  I jogged around for a couple of laps afterwards and took some snaps. Not sure where we finished, but I thought I made some sort of contribution. In self-recognition it was chips at Wallsend afterwards, much more digestible than a medal. On the way back my thoughts turned to maybe re-joining the masters association so that I can run some track events in June and later summer. Before then there's the Black Rock and I am toying with the Helensburgh 10k next week. mmmm...maybe!