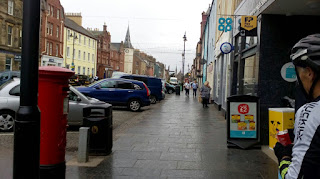 Friday arrived and that heralded the big ride weekend to North Berwick (and back). Its a trip of around 105 miles. Not to be sniffed at! I had been watching the forecast with more than a passing interest over the past few days. It was forecast dry and breezy on the Friday, but the Sunday was looking bleak. However, the forecast can be well off sometimes, so as we kicked off from Lidls where I shoved 6 cereal bars into my already swollen rear pockets, I focused on matters in hand. We cracked on at high speed up through Warkworth to Bamburgh. My Garmin announced each 5 mile split and it occurred to me we were motoring on. Steve, my partner in crime, had taken receipt of a new Willier road bike the previous week. His sorry back catalogue of broken bikes and crippled components was, hopefully, a thing of the past. On the way up we took a couple of wrong turns, one of which threw us back onto the A1. We spent 3 miles at 22 mph riding hard up the hard shoulder being kissed by Coaches and goosed by HGV's before the side road at Scremerston beckoned. That marked the 50 mile mark and we stopped for soup and cake.
The café is next to the Go Outdoors place and is warm, reasonably priced and the waiting staff worked attentively. We cracked on after the half hour stop and passed through Ayton. A small dear ran across the road in front of us, chased out of the nearby field by a combine.  Hitting it at speed on a downhill could have been nasty. After Coldingham we started the long climb to the wind farm. It began to feel like a cross-headwind and progress definitely waned.  The chat became sporadic. Pease Bay came and on the short climb out from the caravan park, I found myself unable to resist the plump brambles at the side of the road. After a veritable fruitfest, I wiped the purple slaver off my chops and we cracked on, stopping again at Dunbar for a juice stop and it was a touch over 6 hours for the 105 miles into North Berwick. 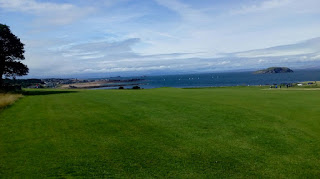 On Saturday, we elected to ride into Edinburgh along the coastal route rather than watch the footie with the other 2 lads who had driven up.  Steve was feeling the previous nights beer and we toiled into a stiff headwind all the way to Portie, where we stopped outside two cafes that were heaving. We sat outside beside the sand. A dog walkers paradise. It was soup and tea again before the speedy wind assisted ride back and another 40 miles in the bag.
We took in the Chinese restaurant in on the 2nd night out in the town.  I slept soundly until I was woken in the early morning by the rain and wind. The wind had turned to a north easterly and it was with a little reluctance that we donned our gear and hit the road at 9ish.  I was saturated after 10 minutes. The clag was down and the snails out on the road en-masse. It must be grim at times being a professional road racer in stage races having to wake up to weather like that and knowing you have 150 kilometres in front of you. The rain never really let up down the road, with us being kept moist in a persistent drizzle and grey sea haar until Seahouses. The handlebar tape gets wet and never dries off and climbing is a little more tricky with the hoods of the brake levers slippy. You never really dry out. By Lesbury there was some unpleasant chaffing to report, so we stopped at the co-op where I invested in some aloe vera lip balm and applied a good dollop to the affected parts. Steve dragged me back the last 10 miles after I lost the will to pedal around Felton. But all in all, a big weeks total for the bike.
Regrettably I picked up my emails on my return and have found out that I didn't manage to get into next Sundays time trial at Erskine, so I'll consider what else is on and see how it shapes up next weekend.