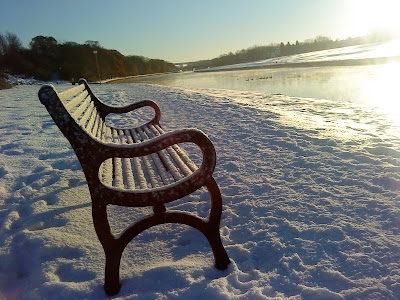 Another first this morning. I think my last blog was a bit premature announcing 'before the thaw'. Out for 8 miles this morning. Even with gloves on, my fingers were 'cauld'. It wis snell cauld. Perishing. I think my ears were numb as well but as I couldn’t feel them I couldn’t be sure of this. It was -10c. The river surface had partly frozen over and there were ducks, seagulls and black geese wrestling each other for the broken water. The geese gave up soon after I passed them and they took off in a slow, laboured flight, presumably going south. I thought it might be warmer where they had come from. They may have come to that conclusion themselves. 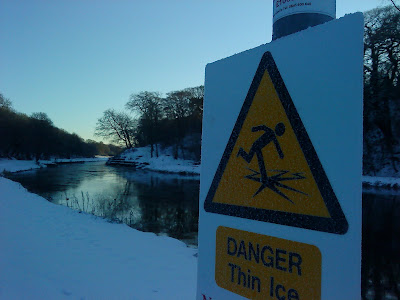 The broken snow on the pavements had frozen hard and was badly rutted, so I stuck to the road once away from the path along the river. As I ran it was so cold, I could almost blow smoke rings with my breath and stopped for 10 minutes by a snow drift to carve an attractive ice sculpture. When the snow first fell last week, everyone was diligently clearing the snow each morning from driveways and pavements. But now after a week and plunged into a Baltic state, like the temperature, standards have plummeted and folk are just happy to be able to get out the front door, the back door abandoned days ago. Pity the local fell races have been cancelled. It would have been a laugh. Remember to feed the birds!
Posted by AMcD at 10:31