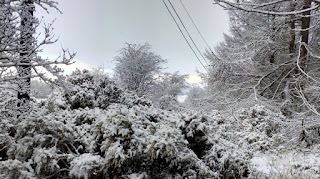 I'm back on the beat. Back pounding the pavements. It is, indeed, good news. There was a wee period late last year when I thought my life as a runner was at an end, but last week the physio advised that things were shaping up well and to keep up the pilates and 'moderate' outdoor activity. I didn't tell her that I'm not capable of moderate. As this week has been slack, I took her up on her word. well, nearly. Yesterday I was happy to deliver a 6 miler with an average of 7m:50s miles. Steady away. This morning brought a great dump of snow and I horsed out the door for a slow and very serene 7.5 miles through the woods. Great for the soul is running in the snow. Good to hear a woodpecker in the woods. I love a good polar vortex. I think I'll manage 30 miles this week. No speed, but at least I'm making inroads into reducing the blubbery mass that's gathered around my lower torso. Might even be able to get my trousers back on in a week or two.  Might have to renew my running club membership. kerching. 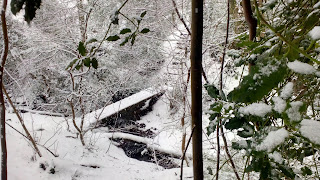 I am not at all sure that pilates once a week is sufficient. I am, however, not following the exercises the physio has set with any discipline, so I need to knuckle down.
I bit the bullet last week, dipped into my savings and ordered a pile of bike parts online for the Roberts frame which has been sat on the floor for a year now. Several bike shops have closed down in the last year or two which is a pity. I got the Chas Roberts frame resprayed in Leeds 12 months ago. With my injury in August and a couple of friends succumbing to cancer last year, I don't think I can sit on my laurels and take my health for granted. So I am planning a few bike rides this year. There is also great chatter among the family about a running and ice cream trip to Chamonix. I don't object. Its a lovely place. God knows whether we will be able to fly there, however. If so, no idea what paperwork and money stuff we'll need. Its a reet boogers muddle. We should get Marie Kondo in to manage the imminent departure from Europe. If nothing else, at least it would be tidy. 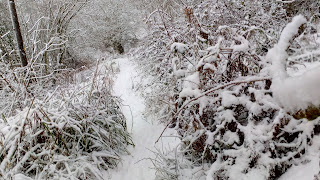 Having finished 'The Loney' (2014:Andrew Hurley) 3 weeks ago, I finished the biography of Alf Engers, top time triallist in the 60's and 70's yesterday. I'm not one usually for biographies, but it was a good read. A superlative cyclist. His battle with the cycling bureaucrats of the day was interesting. I have now dropped onto Mackay Brown's 'Glenvoe' (1972). Another charity shop buy.
I have scattered a rake of birdseed and dropped some wee apples under the hedge in my toetee back garden. I have finished my anchovy and balsamic rocket salad lunch with a yogurt for afters, so better get on with some work this aft. catch you later.
Posted by AMcD at 14:37