Tales from an igloo

I'm a sucker for the snow and with only another inch added last night I grabbed the thawing fell shoes off the radiator, dug out the camera-phone and stole out into the early morning's snow scape. 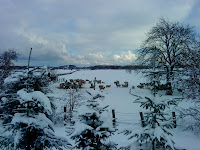 No dog today. I did the same run I did yesterday with an extra 2 mile loop thrown in toward the end. It only took me around 1:40 for 12 miles mostly down to taking fewer snaps than any speed. I bumped into a couple of NFR guys and stopped for a chat and, later, another runner who spent the mile we ran together extolling the virtues of compression tights. 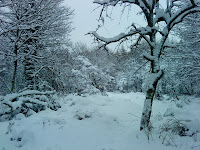 In the woods the trees were filled with huge blobs of cotton wool and the path was barely discernible but I avoided the deeper stuff and made good progress, scrunching through the snow and stumbling only once going up a cambered bank. By the time I came out of the woods I expected to be running out of a wardrobe. I always fancied Canada but never been there and I wonder if this is what Calgary's like for 5 months of the year. 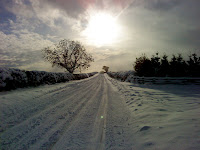 There was virtually no traffic on the road and I guess I could have gone on for another hour or so. Its been a bit milder here this afternoon, but we'll see what tonight brings. I'll probably go for another long one tomorrow. It's a good workout for the quads.