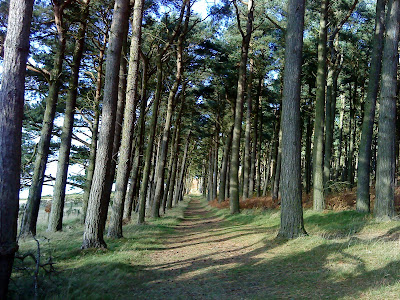 Arriving for a job this morning near Belford in the heart of Nothumberland, I caught a glimpse of the snowy peak of the Cheviot, the first snow I've seen this season. 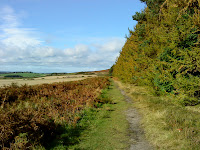 Finishing work mid-afternoon and having skipped more than a few days running, I thought it would be nice to catch a glimpse of the local countryside. Its been a good while since I was around these parts. I parked up near a rough track and headed north armed with my fell shoes and mp3.

There was a brisk north east wind blowing and a flock of geese were struggling near the top of the crags. I jogged along the manicured grass beneath the Scots pine and Douglas Fir under the shadow of Saint Cuthberts Cave to the east and the Cheviots well to the west. 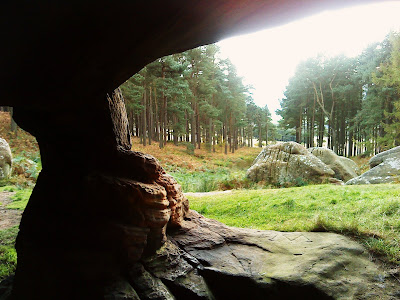 It was said the monks spent the night here in the 11th Century while they carried the body of the old bishop of Lindisfarne to Durham away from the marauding clutches of sea raiders. There was an eerie atmospheric feel to the place but I wasn't alone. The geese had got back in the saddle and were moving across the sky in numbers.

I carried on accompanied by the melancholy harmonies of Blackfield, past the sleepy hollow of Howburn and across some gravel tracks through Kyloe Wood, past an old quarry and into a dense thicket of trees. At 5 miles I turned and headed back the way I came. I clocked it at 1.24 for 10 miles (with numerous stops for photies). There was quite a wind chill this afternoon, but its beautiful at this time of year and hardly anyone around. 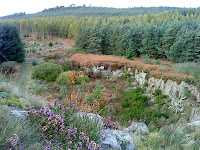 A crusty sunflower brown rustic roll and cold, fresh pint of milk from the local Co-op store never tasted so good.
Posted by AMcD at 17:53

Looks a nice spot to run.
Do you do the Hexham hobble?

Only the once. I can do the Lambert Walk, tho!