It was a beautiful day for the Jedburgh Running Festival. Some roads had been closed to traffic, which is never a bad thing (unless you're a driver) and around 900 border sun seekers lined up together next to the old Abbey for the half marathon and 10k. 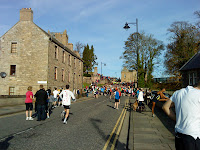 Even though I'd missed the online entry closing date, the organiser had given me the OK as long as I turned up early to register and so I chilled in the car for an hour or so after registering and before the race, with a miles warm up at 10.30am. We gathered at the war memorial under the shadow of the Abbey. The man said 'go' at 11am, as the other man with the gun stood looking blankly at the mis-firing pistol, and off we went haring through Jedburgh High Street.

At 1km I was feeling good and was working up from around 30th as the course went off the Main Road (A68) and up and up again through a leafy side road. It was very up and down for the first 4k. I kept Portobello's Jarvie in view and there was also 2 Teviotdales and a Moorfoot between us. It was a bit of a re-run from the Norham 10k.
I was, however, flagging a bit between 5 and 6k and although the return leg was down the A68 past Jedforests Ground and along the river near the edge of Town, I lost sight of the little bunch ahead and worked hard for a 37:32 and eventual 12th place. One of the lads from Teviotdale kept stopping and after 4 or 5 seconds rallied and off he went again but I couldn't find the speed to catch him.

The organisation was very good though and I liked the venue and positive vibe around the race. Might have another go next year, although it has to be said that it would have to go some to beat today's weather. Turner beat Hulme in 34 mins at the front end. Not a PB course but a peachey run on a picture-postcard day.